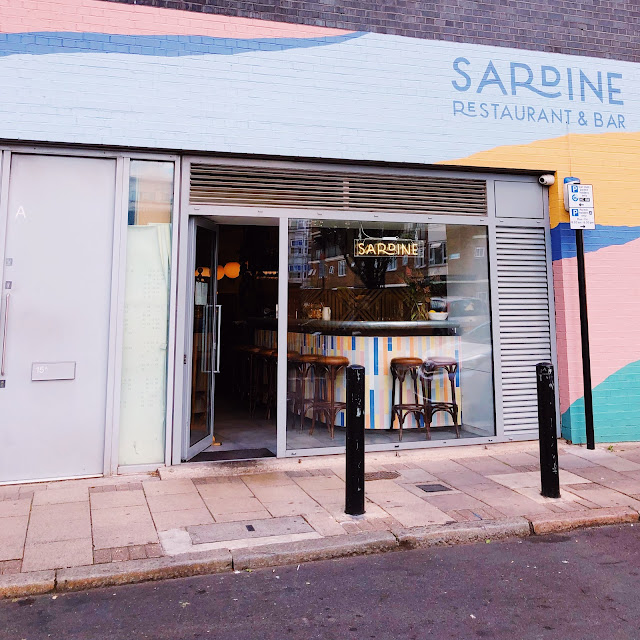 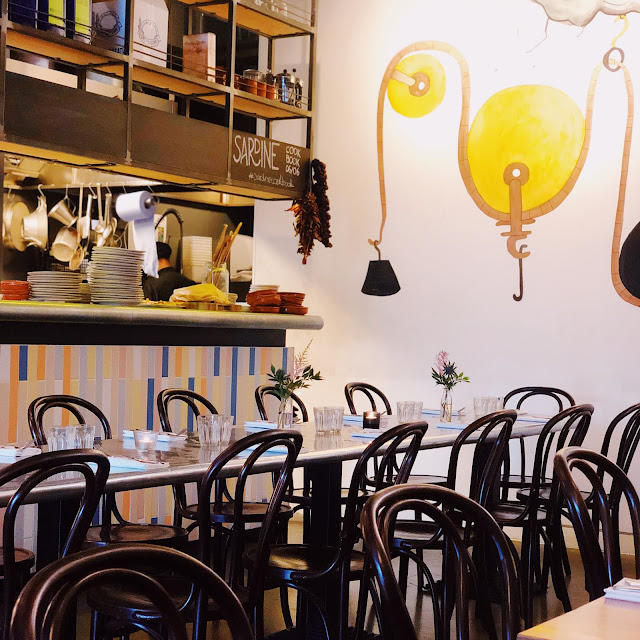 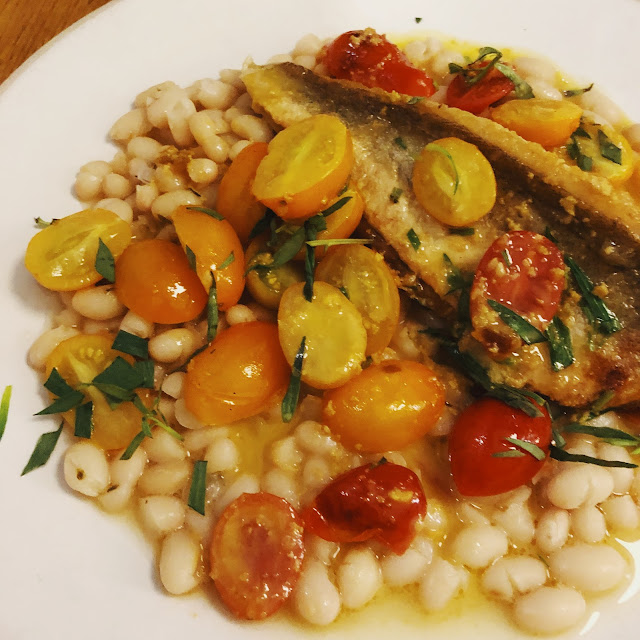 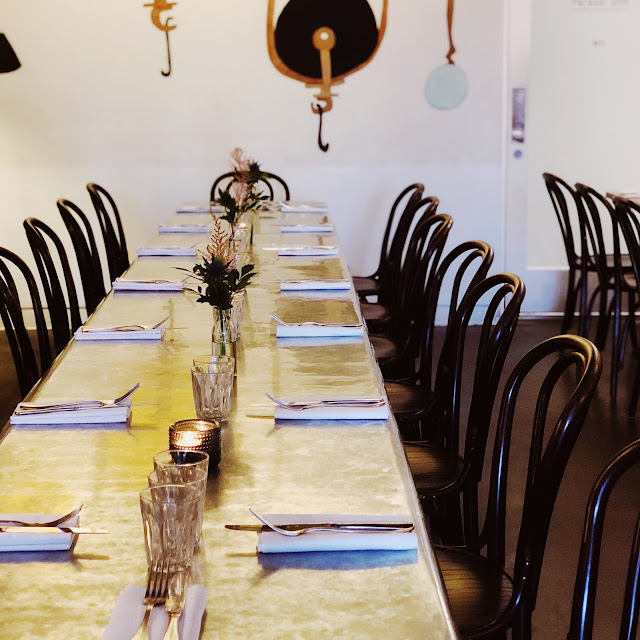 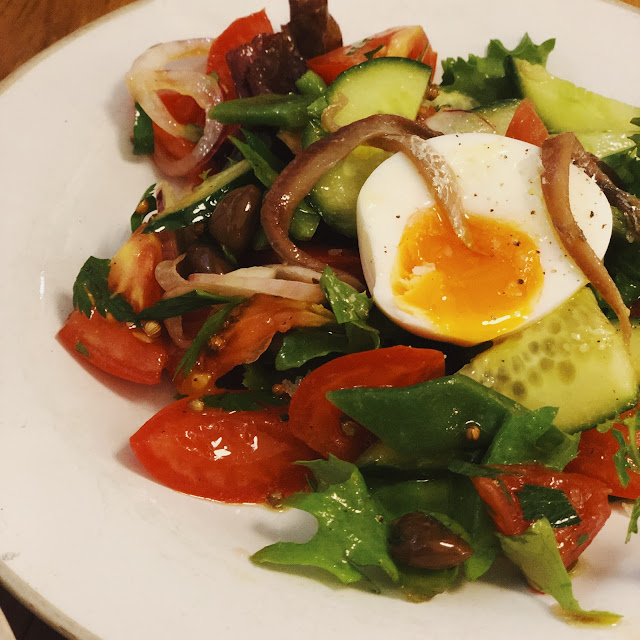 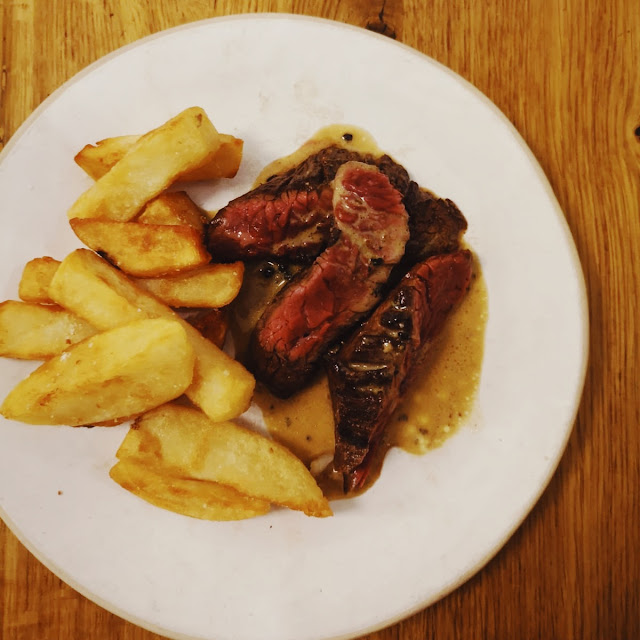 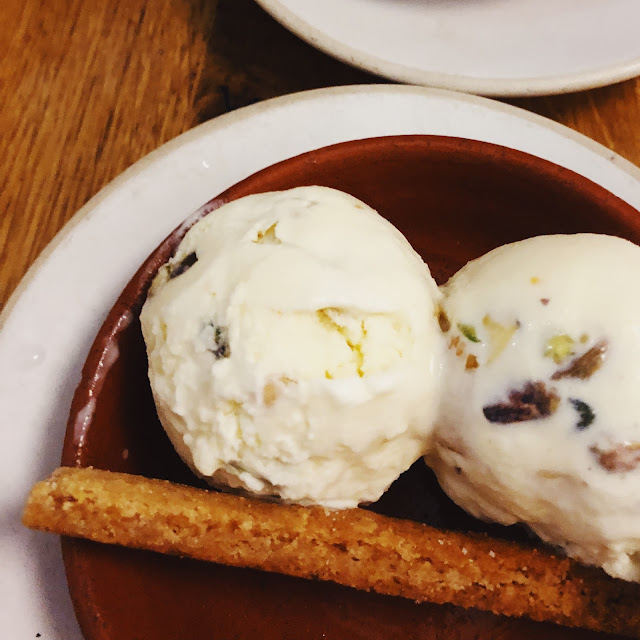 I have to admit that my dinner at Sardine was a little bit of an odd yet still very much recommendable experience. The food was no doubt fantastic- French, modern European cooking, presented beautifully, served in a stunning modern dining room with attentive service and a great selection of wine.

What was odd was the fact that not that many people seem to be aware of all these positives and the restaurant as a whole, which meant that our dinner was at times eerily quiet, at 6pm on a Sunday us being the only diners for a good half an hour before a couple of single diners settled down for their meal. Of course, that meant, looking at the positives, that we never had to wait long for our food but it did make us a little uncomfortable at times, surrounded by empty (albeit beautiful) chairs and tables. This isn’t helped by the location of the restaurant, hidden right behind a McDonalds drive-through on a busy and not very pretty road that connect Old Street and Angel.

I mean I can see why the team behind Pastaio chose this patch, there are a lot of fancy new-build apartments cropping up everywhere, ready for well to do millennials to move into, and there has also been the opening of the Parasol unit art gallery in the same building as the restaurant, so really with all the potential there to get a food savvy crowd, looking for a local spot to dine at inside the restaurant, despite or especially because of the golden arches lying right ahead. But even I, having walked past the place, many, many times, it being on my walk home from the big Sainsbury’s to my house, done on a near weekly basis, had been somewhat perplexed by this chic looking restaurant being where it is rather than compelled to go in. And had I not stumbled across Sardine’s Instagram after some serious social media stalking I may have missed out on some of the best French cooking I have had in London, mere minutes from my house, with interiors that are more Soho or East Village than Hoxton side street.

And in a way, that makes Sardine a hidden dining gem worth treasuring, a place where for the time being you are able to get a last-minute table on a Friday night, where it feels like you are at a central London hot spot but without the annoying crowds, queuing and rushed waiters. I would love to come back on a Saturday or Friday night with a little more buzz though it was quite adorable seeing a very diverse mix of locals dining here as the evening progressed, from an elderly couple on date night to a big family group. I adored the dining space and attention to detail paid when it came to the overall interiors of the place, from the pastel coloured, patterned front of the restaurant that instantly makes you wonder what could be hiding inside, to the wall murals, long communal dining table and pastel tiles inside, it’s a minimal hipster’s wet dream and has something very Scandi chic but still incredibly welcoming about it.

The menu is well curated, with a focus on Southern French cooking and seasonal ingredients, and it really feels like the chefs here, who you can see in action with the open plan kitchen, made this menu for you, giving the whole dining experience a very intimate touch. Starters weren’t flawless, our bread and butter weren’t of the quality I’d expect at a “French inspired” restaurant, but our starter of salt cod, stuffed into a friggitelli (an Italian sweet pepper) and served with a tomato sauce was fresh and tasty while our Salade Tunisienne was summer on a plate – perfectly dressed leafs with tomato, cucumber, coriander and egg.

There are only 5 mains on offer, 1 vegetarian, 2 fish and 2 meat options which is not a huge selection but again you are here to trust the kitchen- I asked our lovely waitress what she would choose as none meat eater and went with her recommendation of roast Gunard, white beans, datterini tomatoes and bottarga butter which not only looked almost too pretty to eat but was an utter delight to eat. Not cheap at £19.5 a portion, but showcasing high quality ingredients and attentive cooking like you seldom find in bigger kitchens. We also had some fantastic chips on the side, all kinds of fluffy and fried to perfection, served with a fresh aioli which I could have bathed in and some creamed spinach, both very generously portioned.

My friend went for a more permanent fixture on the menu, the onglet with chips and pepper sauce, which sadly was not too much of a delight to eat, the meat rather chewy BUT my friend not blaming the restaurant rather an unhappy cow which can happen at even the best of restaurants. I would thus say if you dine at Sardine stick to the more seasonal mains as those give the talented chefs in the kitchen a real chance to show off their creativity.

For dessert, I plumped for the nougat ice cream with fennel biscuit which tasted incredibly fresh and well made, not over the top in size and flavour but just right – a kind of refined yet casual cooking style that I think encompasses Sardine, and something you do not find too often in London without going into the super expensive. That is the whole thing, Sardine has all the makings of a fantastic neighbourhood joint, one anyone would be more than happy to have close by but it is almost too hidden for its own good right now.

If you are after a really, really well-cooked French dinner that almost feels like you have a private chef, eaten in a lovely dining environment, make your way to Sardine, these guys deserve a chance to step out of the shadow of the fast food giant that is right in front of them and if it were in central London (it reminds me a lot of 10 Greek street actually), you’d be queuing no matter the weekday and pay a lot more for it. 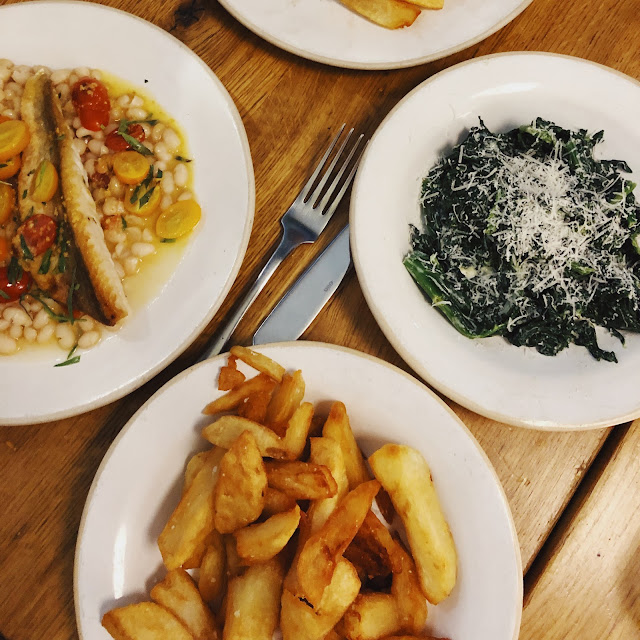