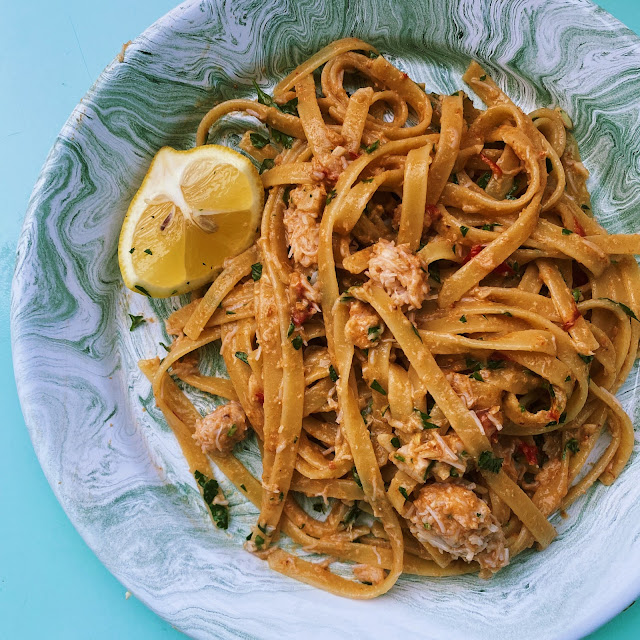 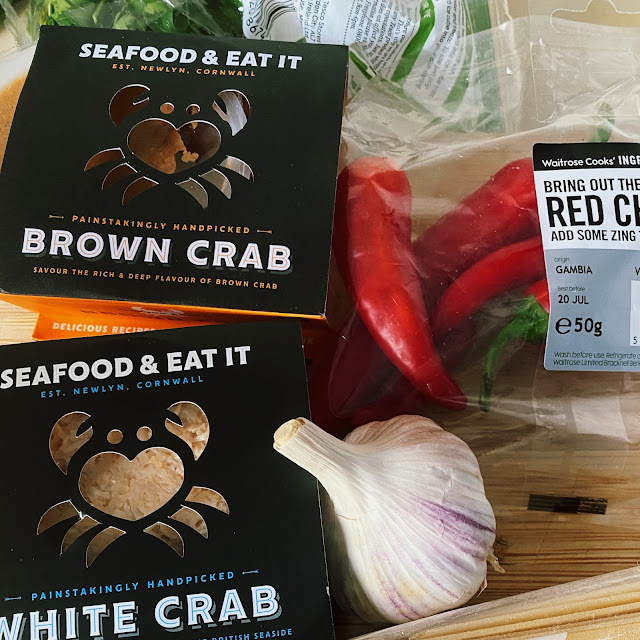 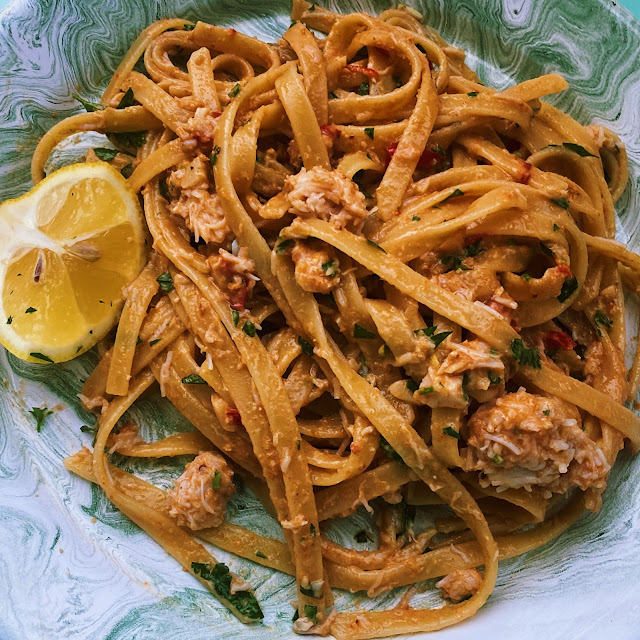 You can't really go wrong when it comes to combining fresh crab with pasta and this super simple dish delivers on all fronts! A perfect weekday summer supper that is sure to impress!

METHOD
Posted by Stella's wardrobe at 12:49 No comments: 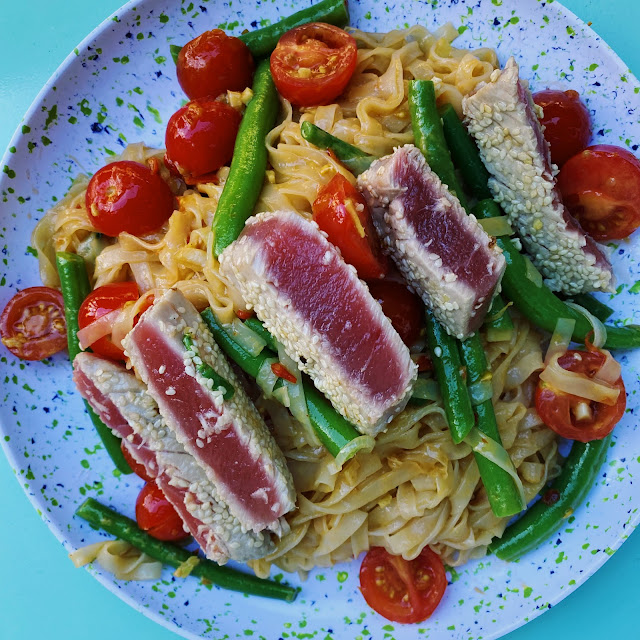 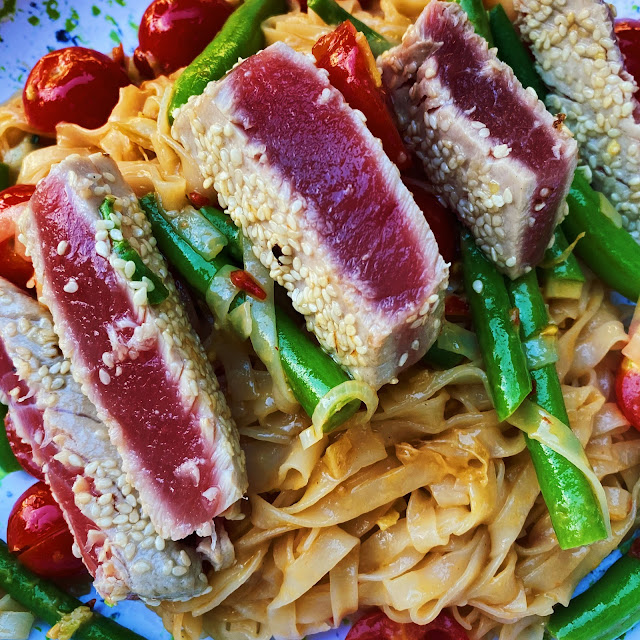 We may be over the worst of the heat wave (for now) but temperatures are still pretty soaring and I am definitely still only in the mood for super light, flavourful and satisfying dishes that don't sit too heavy in the stomach.
This seared, sesame coated tuna steak, served with a super fresh noodle salad ticks all those boxes and is also super quick to rustle up! A perfect weekday supper that still delivers a wow factor.
SERVES 2
INGREDIENTS
METHOD
Posted by Stella's wardrobe at 08:26 No comments: 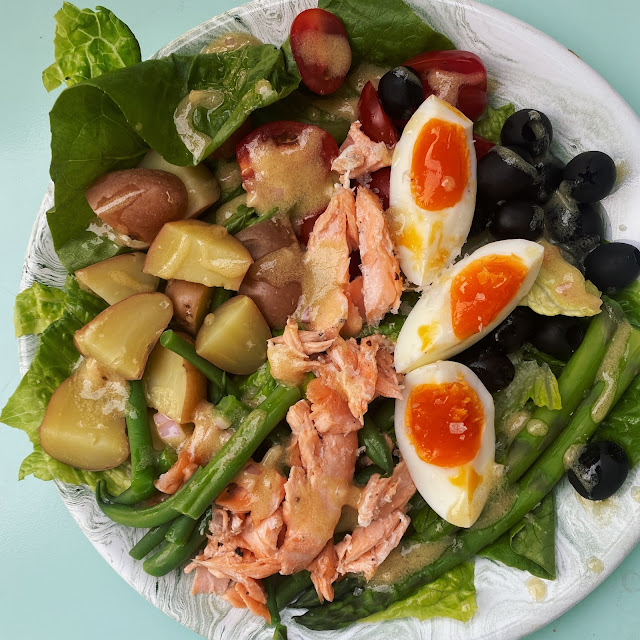 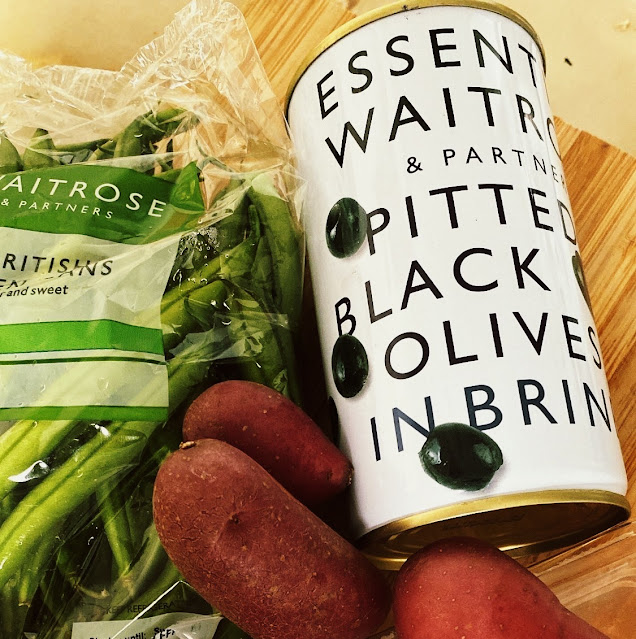 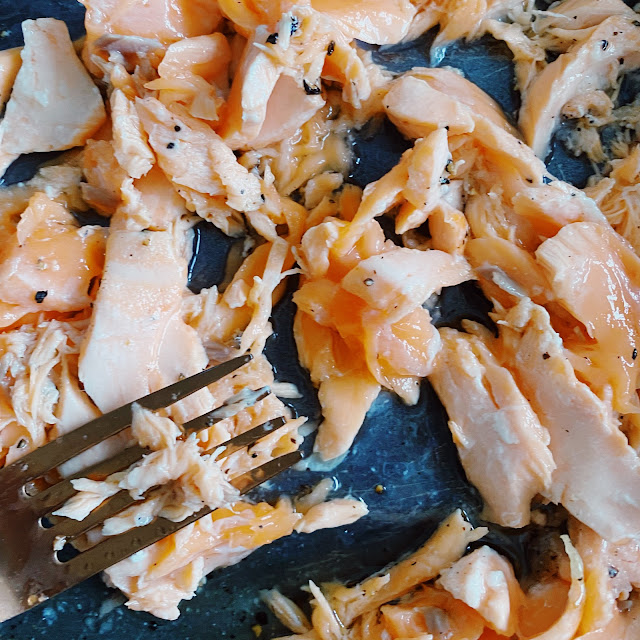 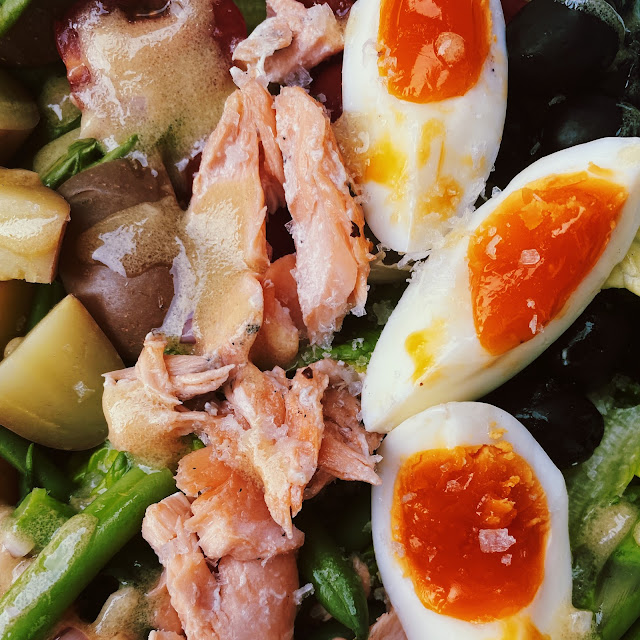 I LOVED this twist on the classic tuna niçoise salad in which your classic tinned tuna get substituted with the most wonderfully flaky yet juicy and super tasty slow roast salmon.

Add a great dressing, potatoes, green beans, tomatoes, olives and perfectly waxy cooked eggs and you get yourself a healthy, delicious and heat wave proof dinner! What's not to love!!

METHOD
Posted by Stella's wardrobe at 10:38 No comments: 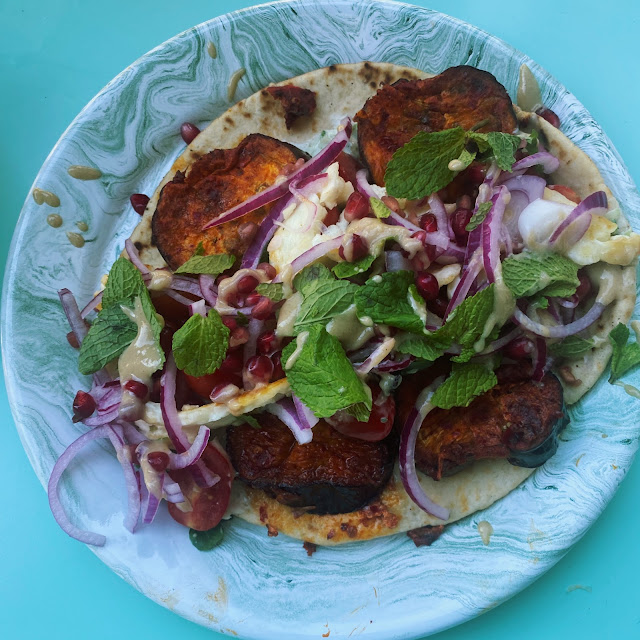 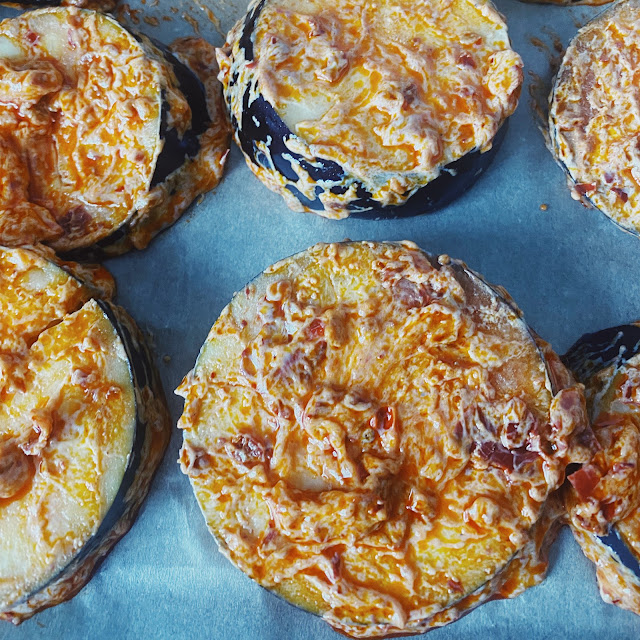 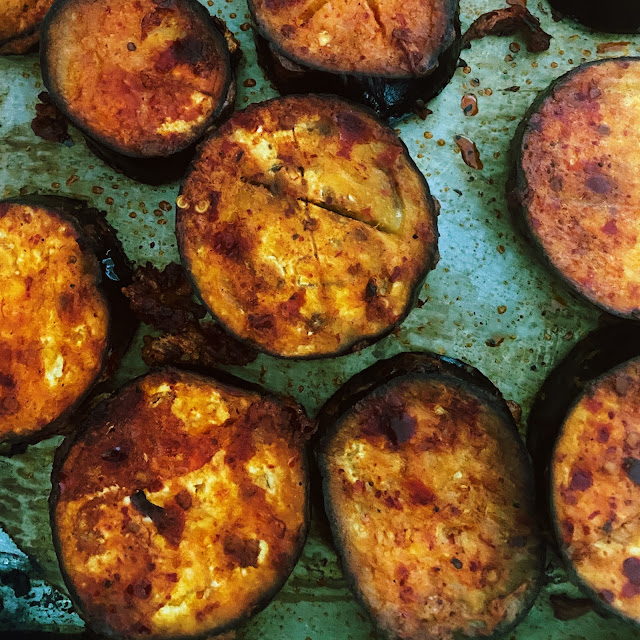 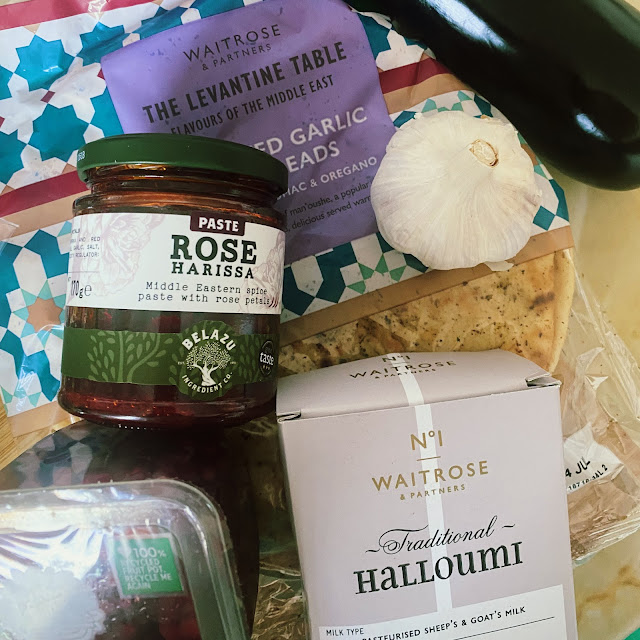 This is yet another fabulous and quick dinner for a hot summer's day!

It's packed full of flavours with minimal cooking involved (no one's got time to make flatbreads from scratch while we have this weather!) and a new quick supper favourite of mine..enjoy!

TO SERVE
METHOD
Posted by Stella's wardrobe at 07:58 No comments: 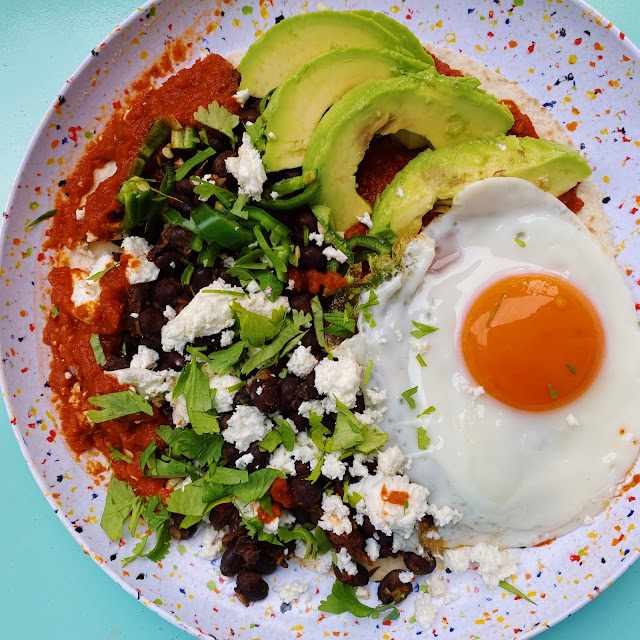 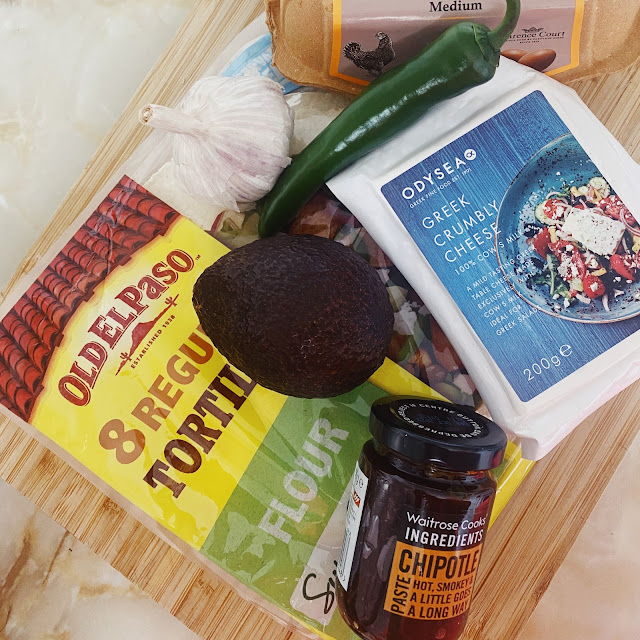 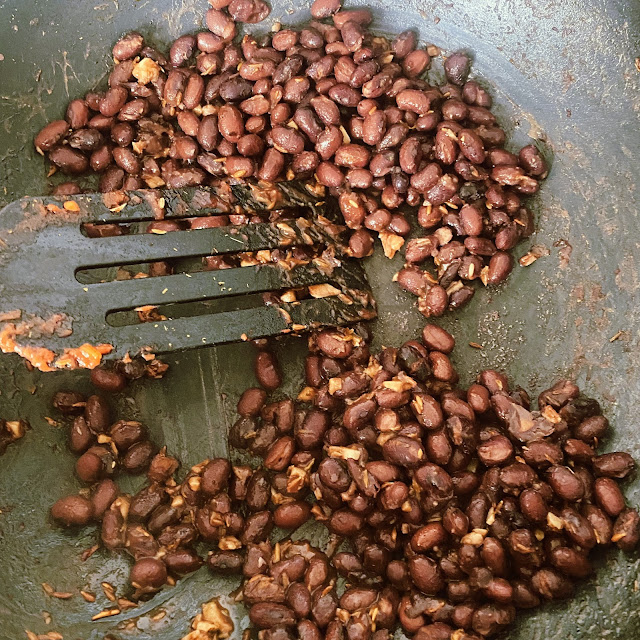 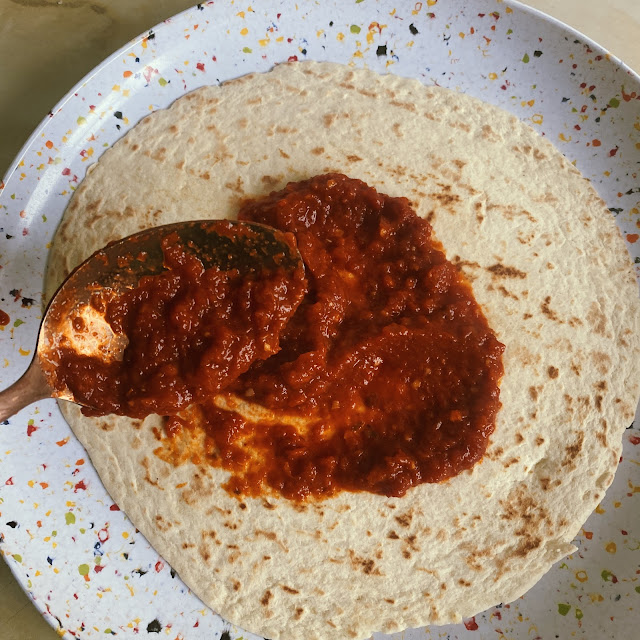 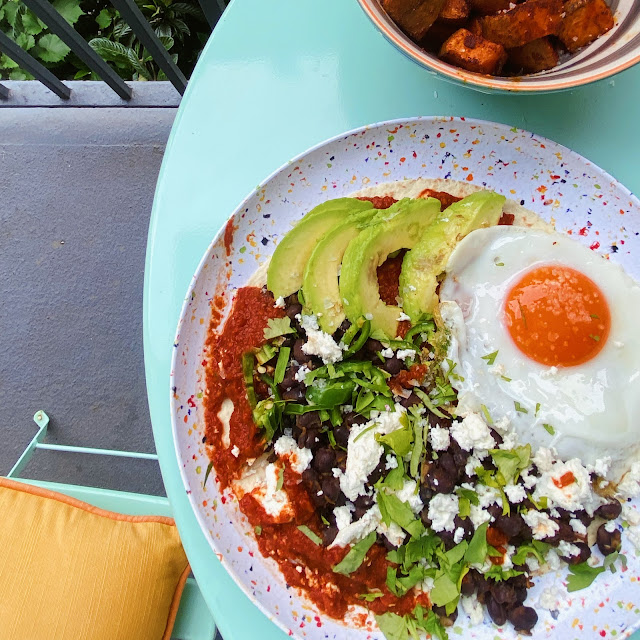 When it's this hot outside you definitely do not want to spend hours slaving away in an even hotter kitchen, nor is it the weather for heavy, creamy dishes which is why my take on the Mexican classic Huevos Rancheros worked such a treat on a balmy Friday night!

Packed with flavour, more of an assembly than cooking job and pretty much summer on a plate, I can only recommend you make these asap for yourself at home (and if you feel extra suave serve them up with a spicy Marg on the side!).

INGREDIENTS
METHOD
Posted by Stella's wardrobe at 03:56 No comments: 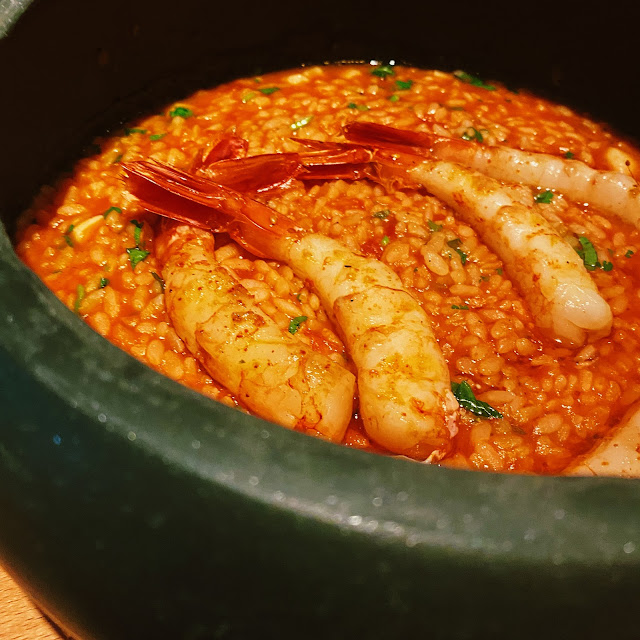 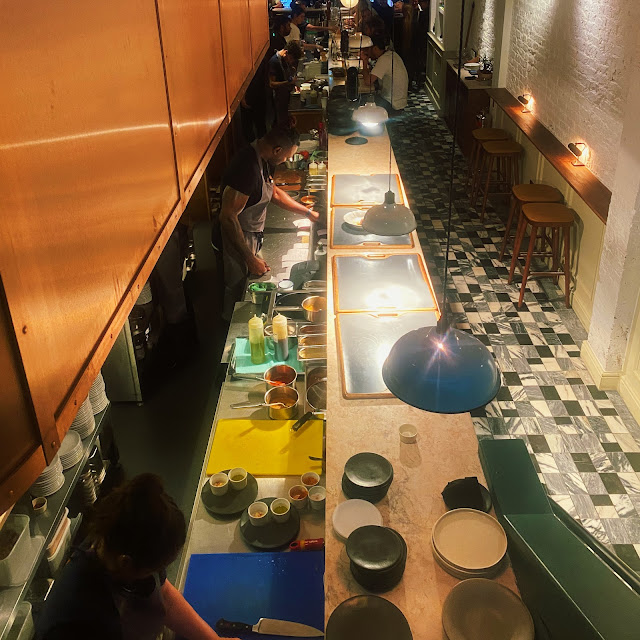 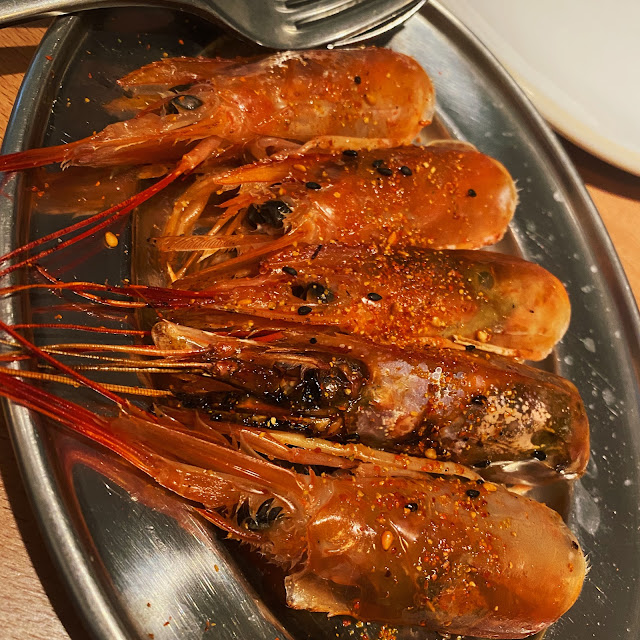 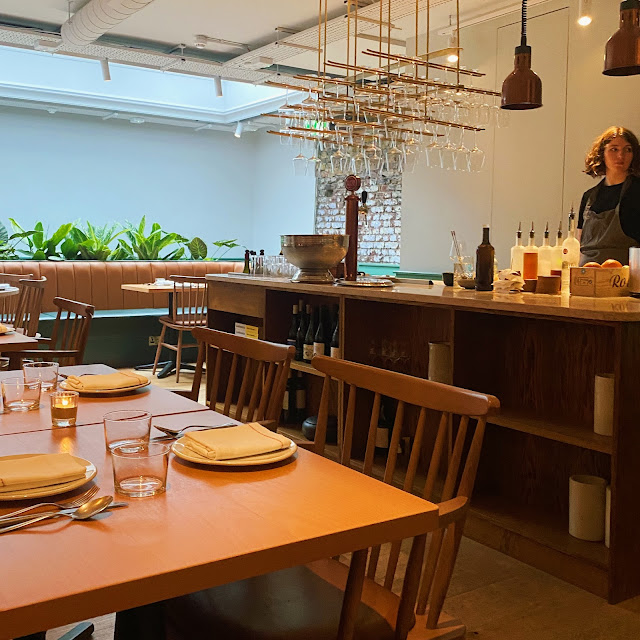 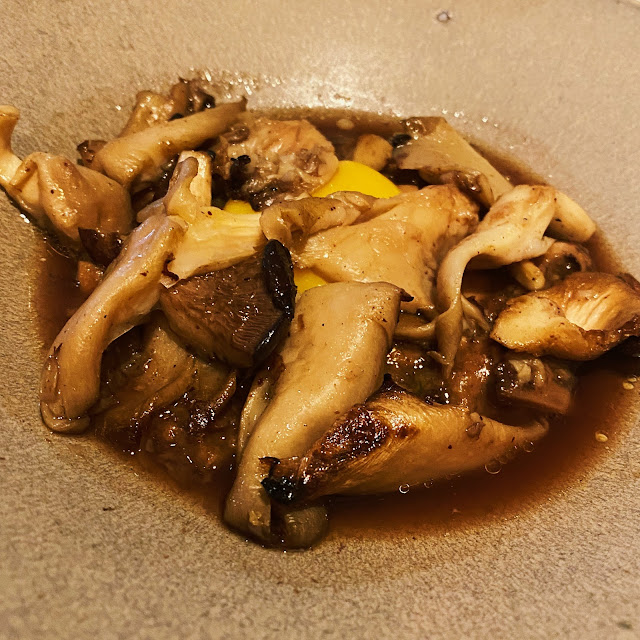 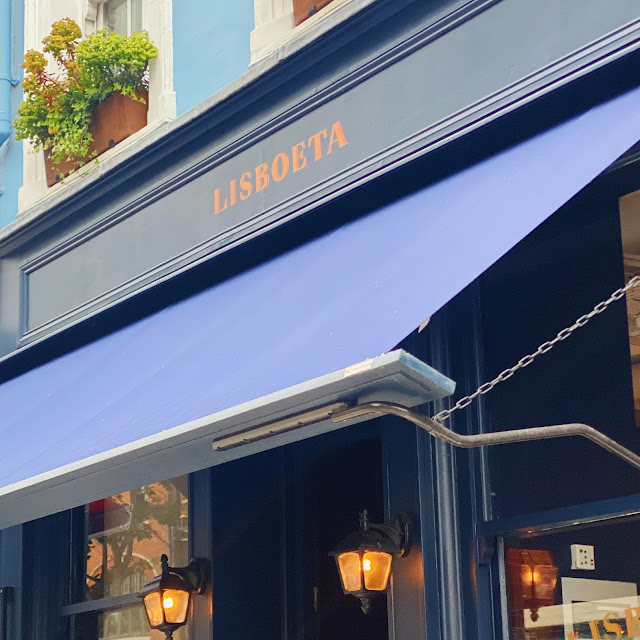 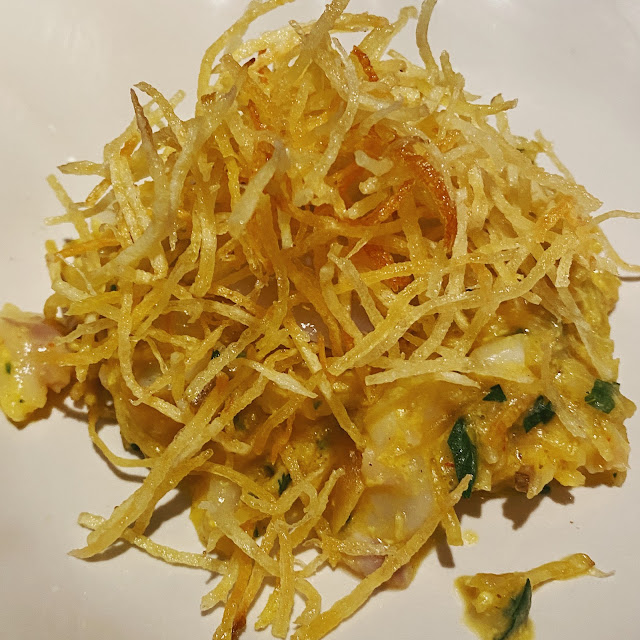 An actual restaurant review on the blog! I have to say post lockdown life has been so busy that I have just about had time to get recipes written up and rather neglected my restaurant reviews and travel guides (I still owe you an updated Stockholm AND Paris foodie guide), but fear not I will use the calmer summer months to make an effort to write more because I have seriously missed it!

My first review after my unplanned hiatus may be a little clunky but bear with me, I will be in the swing of things in NO TIME and luckily Lisboeta was so bloody fantastic that it was a real pleasure to write about my wonderful dinner there!

It took a while to find a dinner spot both me and my favourite dining companion, Henry, could agree on and most importantly one where we could actually get a table (much like the travel sector, restaurants are not ready for the onslaught of post lockdown guests) but I instantly loved the idea of Lisboeta when Henry suggested it.

Indeed the second he mentioned that top chef and legend of the London restaurant scene, Nuno Mendes, was the brains and palette behind Lisboeta I was pretty much sold.
Mendes has run some of the best restaurant kitchen in London over the years but with Lisboeta he is trying something a little different, bringing a taste of his home country, Portugal, to Fitzrovia and oh BOY does he succeed!
Lisboeta is vibrant, refreshing, confident and delivers in terms atmosphere, food and service, making my dinner there one of the best restaurant experiences I have had a in a long time!

The space is gorgeous, bright, over three floors and with an impressive open kitchen. It's also bang in the middle of Charlotte street, one of the most quaint and lovely, yet not too touristy streets in central, making it perfect spot if you want dinner in town but want to avoid crowds.

At first glance the menu is a little meat heavy but don't be put off by that. While I wouldn't say it is the most vegetarian friendly spot (even the bread gets served with lard), their fish options are out of this world amazing and made it such a wonderful dining experience.
We started with a couple of small plates which were so packed full of flavour that they could have easily been billed as main courses. The Mushroom Açorda, shared between the two of us, was quite possibly one of the best mushrooms dishes I have ever had - a mix of wild mushrooms is served with the most wonderful egg yolk bread sauce.
Henry had get some sort of meat fix so had the grilled acorn-fed black pork from the Alentejo with fermented red pepper paste which according to him was a carnivore's dream, while I had the Bacalhau à Brás - confit cod with caramelised onions and thinly sliced crispy potatoes. My god, it was an absolute dream - sophisticated yet satisfying and Henry tried to steal more than just a spoonful once he realised how delicious my choice was.
The main course section is made of platters and pots to share and we simply HAD to have the most hyped dish on the menu, the Arroz de Marisco or red prawn and seafood rice (a sort of rice stew rather than a paella in consistency, and my god did it deliver.
Served in a clay pot and topped with the most incredible red prawns, it also came with a side of prawn heads which were to be squeezed over for extra flavour. It was utter perfection in its simplicity, full of flavours, beautifully plated up and encapsulating the vibrancy of Portuguese cuisine in one dish. I
It's the sort of dish you will not forget in a hurry and that you will yearn to have again, which also pretty much sums up Lisboeta because it really highlighted what a great restaurant can do and make you feel!
I love cooking and have grown a little tired of eating out but when there is special places like Lisboeta still opening and doing there thing, I realise that the restaurant scene is still out there thriving and worth the effort of hunting down a reservation.

Posted by Stella's wardrobe at 04:51 No comments: