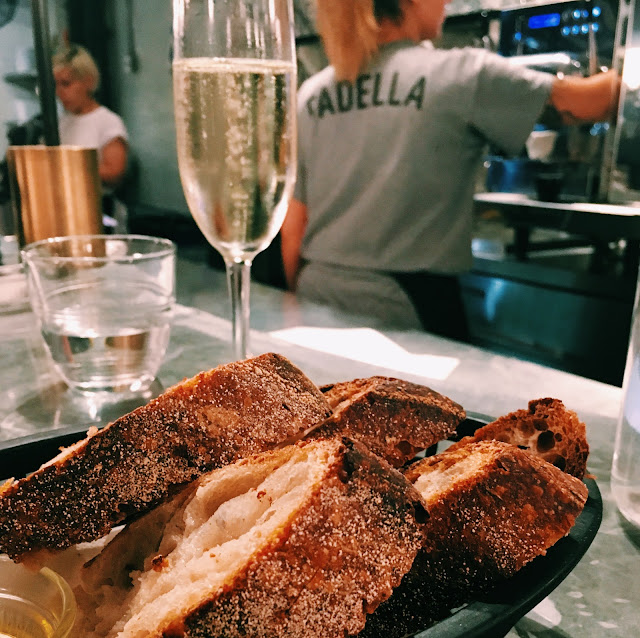 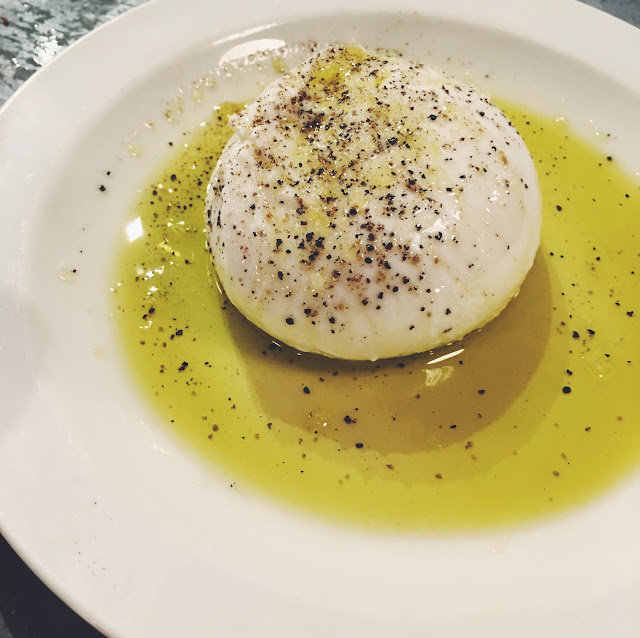 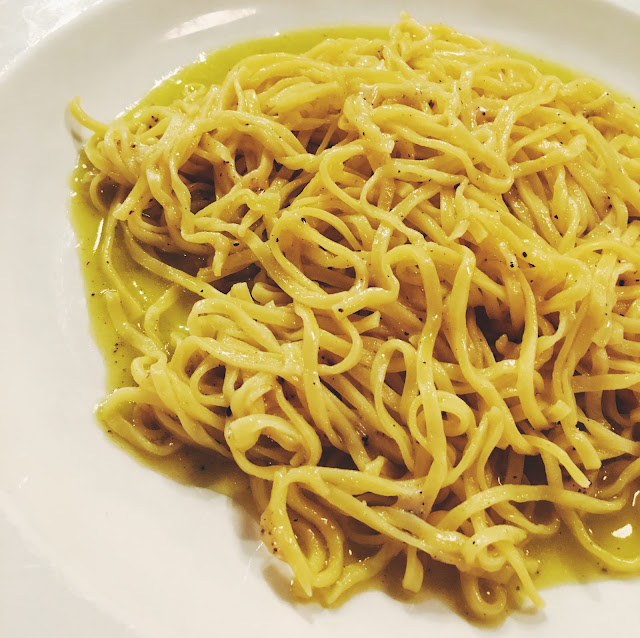 Having just returned from a trip to Italy's capital and facing an unusually prolonged heatwave in London, I couldn't help but crave the fantastic pasta I had eaten under the Roman sun just a couple of weeks ago whilst slurping on an ice cold Aperol Spritz. Of course pasta isn't the easiest dish to find done well and in an authentic manner in this city. Yes, if you want a cheap and quick pasta fix Vapiano is far from terrible, though it is technically speaking more German-Italian and the queuing concept doesn't exactly lend itself to a sophisticated dining experience, however if you are searching for that real deal pasta to sweep you of your culinary feet you are seriously going to struggle (and let's not even consider somewhere like Jamie's Italian as capable of serving anything even near passable with their "Anglo-Italian" travesties).

There however appeared to be a glimmer of hope on the horizon after I had heard A LOT of very good things about a little place called Padella, a rather cosy restaurant in the heart of Borough Market, which opened less than a year ago and got me very intrigued to say the least. Owned by the duo behind the highly successful but slightly more pricey Italian restaurant Trullo in Highbury which has been on my to try list for years, Padella's premise is so simple, to only serve fantastic fresh pasta at ridiculously good prices, that you wonder why no one else has done something similar before because here the results are simply outstanding.

Of course news of such a brilliant spot opening it's doors travels very quickly in the London foodie scene, with Padella receiving stellar reviews from all the top restaurant critics out there including one of my favourites Marina O'Loughlin at the Guardian, which has made one of the stools around their bar one of the most coveted seats when it comes to eating out in the capital, further aided by the fact that one has to try pretty hard to spent more than £30 a head here even when eating your way through their starters, pasta mains and with added prosecco.

Determined after my Rome adventure to keep pasta in my life a little longer, we decided to use an early dinner on a Sunday as our chance to dodge the crowds. At this point I do have to mention that between me and my friend hatching these plans and us actually going a terrible, terrible thing happened in the exact location we were planning to head to for this dinner. This was of course the very recent London Bridge terror attack, where innocent people were brutally injured and murdered as they were trying to enjoy their Saturday drinking, eating and just enjoying a warm summer evening. There was still a very sombre feeling in the air as I walked through the market a mere week after it had all happened and heartbreaking reminders of the tragedy that took place here were visible everywhere through flowers and notes left behind.

I will however make one thing very clear here: terrorism is conducted in order to intimidate and deter us from openly living our lives by spreading fear. I for one refuse to let their actions stop me from enjoying not only my life but also London as a whole. I love this city from the bottom of my heart and I also love it's vibrant and constantly evolving eating, drinking and going out scene. I will therefore not only continue to enjoy and visit Borough Market but also all the other things that make this city so bloody brilliant, even if they involve big crowds or other potential "danger factors". I will not let terrorism intimidate me because a life lived in fear is a wasted one.

Anyway to come back to the actual restaurant review and our early Sunday dinner here (which thankfully was still well visited by fellow diners sharing a similar mindset to us). I love a restaurant with a confident and concise menu that does a few things very, very well and that is definitely the case at Padella. Order yourself an ice cold glass of prosecco to start, a very reasonable £5 a pop, and then make sure to get the burrata with Puglian olive oil as fast as is physically possible. Why? At a ridiculously affordable £4.5 you get one of the best burratas, I hazard a confident guess, you'll ever be able to find anywhere in this country, so simple yet so brilliant, especially when you soak up every last bit of cheesy goodness with the delicious bread served on the side.

Moving on to the star of the show which of course is the pasta here. With so many fantastic sounding options on the menu we eventually settled on sharing 3 dishes between the two of us which was just about right. To clarify this isn't going to be the spag bowl size portion you have at home but is indeed much more about trying as many different pasta shapes and sauces as possible so please share to make the most of it! Even with the three we settled for I could have easily tried more of the menu if that had been at all socially acceptable without being classed a total glutton, with 7 of the 8 pasta dishes being suitable for none meat eaters and each already on paper sounding utterly dreamy. They may not have quite measured up to what was undoubtably the best pasta of my life at Da Enzo in Rome ( I still day dream of their Cacio De Pepe), but all three were nonetheless utterly outstanding and of a standard of pasta like I have never had before in the UK.

The gnocchi, served with nutmeg butter and sage, were light yet earthy and inhaled by us in a few forkfuls and the tagliarini (a very thin spaghetti) served with brown shrimps, raw courgette and chilli tasted like summer on a plate with it's vibrant, almost singing flavours. Our absolute highlight however was the most simple sounding of the them all- a plate of divinely made pasta served just with Chiarentana olive oil & parmesan. The combination of fantastic pasta making skills and authentically sourced and great ingredients made it a dish I will not forget in a hurry, even more impressive when one considers that this dish will cost you a mere £6.5. Indeed our whole meal, including two glasses of prosecco each, came to just under £24 which for me is as good a value meal you are ever going to get in London.

It may not be quite as they do in Rome but Padella for me serves the best pasta in London and I am not the first one to come to this conclusion. Yes, you may have to queue here to snag a table but I don't think there has ever been a better time to do so, not only to have a truly outstanding meal that won't break the bank at the end of it but also to support Borough Market and to make it abundantly clear that us Londoners haven't forgotten how to have a brilliant time and make the most of our city. 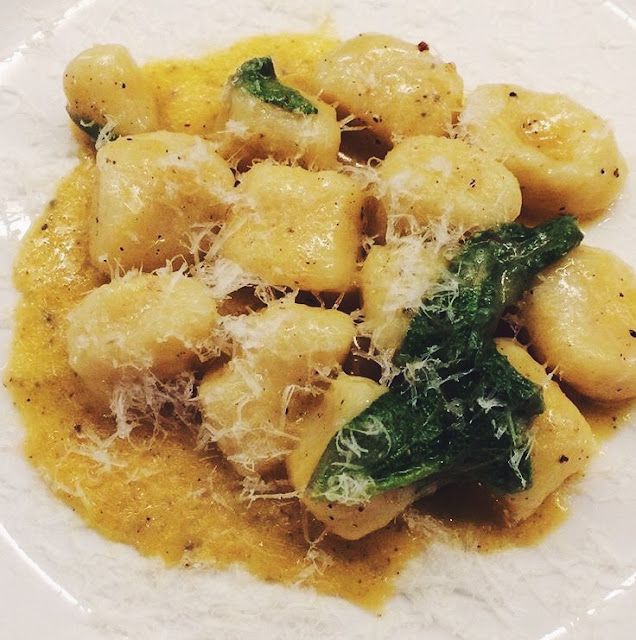 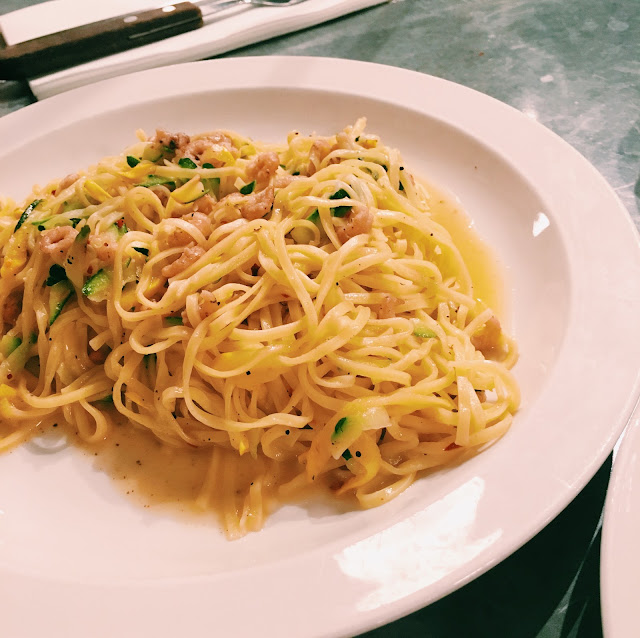 Its nice article great information thanks for sharing read every article and follow this "stella"...
Happ Valentine Day Images 2018

This so wonderful we hope you take a look at our good morning image with love couple and thanks a lot for your support.