THE NEW ICE CREAMS IN TOWN

My favourite sweet thing (bar a long standing obsession with Sainsbury's Taste The Difference white chocolate and raspberries cookies) has to be ice cream, in fact there is rarely a hungover Saturday that goes by without me finishing off an entire pint of the good stuff to myself. Of course I've got my tried and tested flavour favourites that never fail to satisfy my craving, ranked in a blog post not too long ago, but as variety is the spice of life I also always keep an eye out for new flavours on my supermarket runs.

Admittedly I may be a bit of a nerd when it comes to finding new ice cream flavours but at least it means that I've been doing the taste testing so that you don't have to, along the way finding some real gems that have seriously challenged the classics (though Haagen-Dazs's salted caramel and Ben & Jerry's sadly discontinued Cinnamon Bun flavour will always take some beating).

Below 5 brand new flavours available at most Tesco's and Sainsbury's and my honest rating out of 5 on them because hey what better time to get stuck into some serious ice cream then when you can hide away under your duvet, put on a Christmas movie and pretend it's not miserable and cold outside! Have you tried any of these and if you have what are your verdicts? 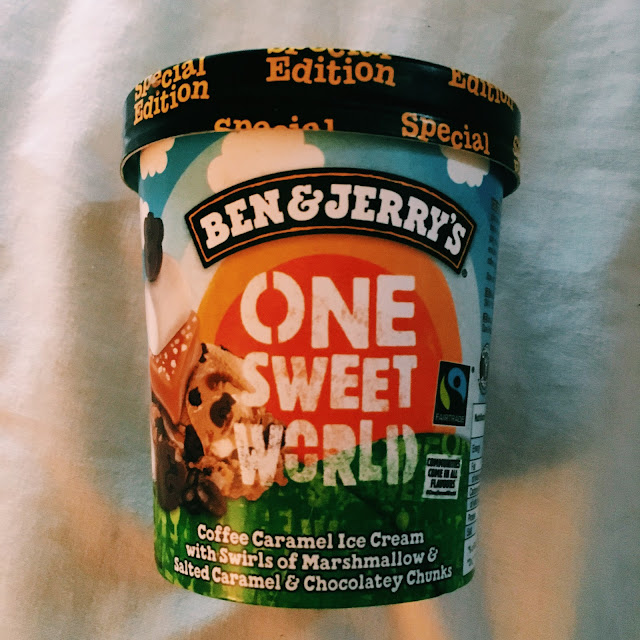 Despite being somewhat of coffee addict in everyday life I was pretty sceptical about this flavour before I dug in, not usually keen at all on coffee flavoured ice creams or desserts as a whole, not even an amazing tiramisu or coffee cake able to get me excited. One Sweet World however changed everything. It may sound like there is a lot going on flavour-wise - coffee caramel ice cream combined with the most lavish and pillowy of marshmallow swirls, dark chocolate chunks and a decadent salted caramel swirl to finish it all off, but it all somehow works incredibly well together! The caramel is more of a background flavour in both the ice cream, which does mainly taste like coffee, and in the barely there but still appreciated salted caramel swirl. This ice cream indeed is all about the stunning combo of the ice cream with the marshmallow swirl which has an almost whipped cream like quality to it,  it all broken up in its sweetness by the delicious chocolate chunks. Buy this now before Ben & Jerry's decides to discontinue another all time great. I will be stocking up my freezer. 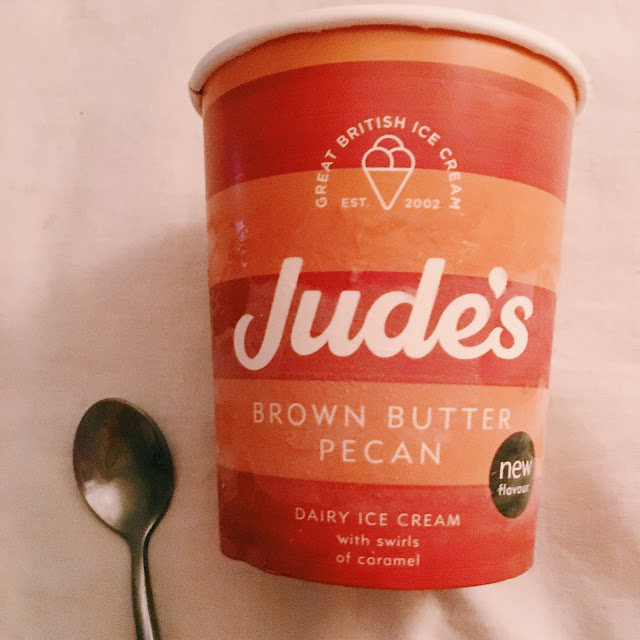 DAIRY ICE CREAM WITH SWIRLS OF CARAMEL AND PECAN NUTS

I may usually stick to my B&J and Haagen-Dazs when it comes to ice cream (supermarket own brands and those disappointing carte d'or numbers generally a big no no in my eyes) but will of course occasionally give smaller, more artisanal brands a chance if I spot them down the frozen isle. Jude's is a independent British ice cream maker that has only been around since 2002 but has firmly established themselves in the market, slowly but surely expanding their range. Though I had previously been left rather disappointed by their salted caramel flavour I was more than intrigued by their Brown Pecan Butter flavour, particularly after stumbling across some rave reviews online. And indeed this was a rather pleasant surprise. Yes, it wasn't the best ice cream I've ever tasted but it's luxurious yet light texture and more delicate flavours gave it a real point of difference to the big boys in the ice cream business. This isn't about cramming as many flavours and textures into a pint as possible, no this ice cream shows real craft, quality and freshness that made it a delight to eat (and way less richer too) compared to my usual choices. In terms of flavour this is probably the closest you will ever get to eating a Wether's Original in ice cream form which in my eyes is a pretty dreamy thing. Give this ice cream a go on the occasions when you fancy something a little less full on and more grown up, you won't be disappointed. 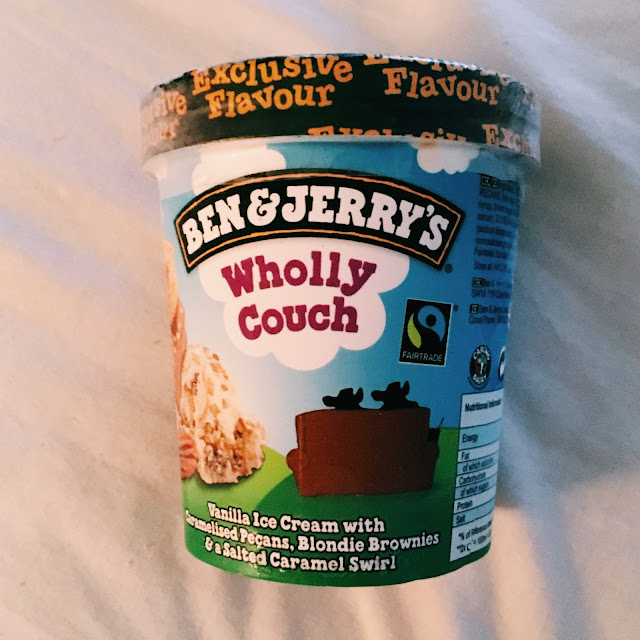 This flavour had a lot of potential on paper and saw me seek out a big Tesco near me especially to get my hands on a pint, it for now exclusively stocked there. Sadly however Wholly Couch turned out to be a perfectly passable but far from memorable ice cream. Maybe this was because I am used to a more powerful base than vanilla when it comes Ben & Jerry's, maybe because the blondie pieces were few and far between or maybe because the salted caramel swirl on its own, without the aid of other strong flavours like in One Sweet World, wasn't quite of the standard that Haagen-Dazs presents us with. It's a real shame as this ice cream does have everything in it that I love and I even went on to buy and eat a few more pints thinking I had gotten a dodgy batch but sadly they all tasted pretty much the same. As I said this flavour is far from terrible and definitely worth a try if you spot it but it's also a missed opportunity to create another truly memorable flavour! 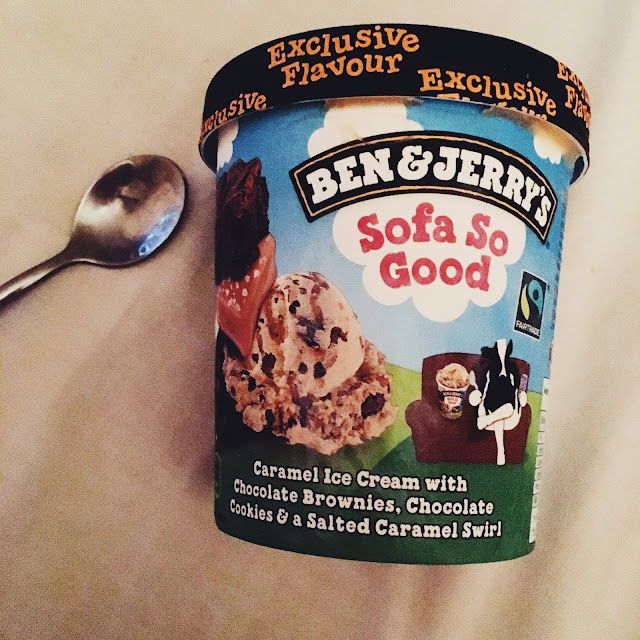 Now to keep these reviews honest I should probably admit now that I am not a big fan of anything to chocolatey. Sounds weird I know and I love anything to do with white chocolate, which I guess isn't really chocolate at all to purist, and caramel but when it comes to brownies, fudge cake and the like I would rather pass, which considering the main components of this ice cream being brownies and chocolate cookies made me rather predisposed to not like it. I did have hopes however that when combined with the B&J's caramel ice cream I loved so much in Karamel Sutra and with an extra bit of caramel swirl I would somehow change my mind. Unfortunately for me the whole pint was dotted with huge chunks of brownie that completely overwhelmed all other flavours while the bits of cookies added an almost savoury cocoa note that just didn't work for me with the other ingredients. Ultimately I ended up picking at the caramel ice cream while searching for a caramel swirl that was barely there and pretty much leaving the rest on the side. Not one to keep in the range when we could all be having B&J's Cinnamon Bun flavour! 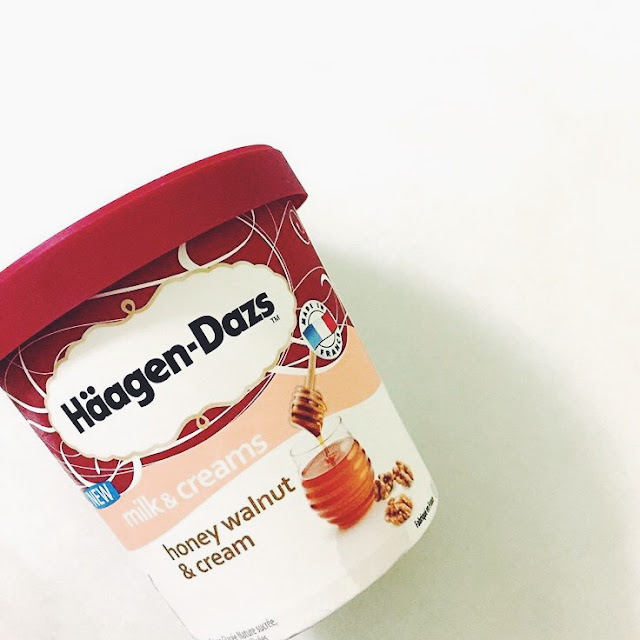 An honourable mention also goes to Haagen Dasz's new Honey & Walnut flavour. It's a very sophisticated and subtle flavour combo that doesn't quite measure up to their Pralines & Cream or Salted Caramel variations but is definitely one worth trying for all nut lovers that don't like it to sweet!

Thank you for sharing your thoughts and for inspiring us. Keep it up and continue on what your doing. Visit my site too. - google maps street view

So cruel..! And living in South Africa, I probably will never get to taste those decadent flavours... Just have to say, I love your posts and always feel excited to check out what you're wearing next!

given article is very helpful and very useful for my admin, and pardon me permission to share articles here hopefully helped Obat lambung bengkak

given article is very helpful and very useful for my admin, and pardon me permission to share articles here hopefully helped Cara mengobati batu empedu

First, Thanks for this wonderful information. This article is very helpful to all users. Thanks a lot for sharing.
How To Close Apps On iPhone X
iPhone Do Not Disturb

Great thanks for sharing. lucky patcher

Useful lists and resources, they are very useful for bloggers, special for me.
Once again, thank you.
divi theme
genesis framework

Your article is very nice and very helpful for me, they are very useful for bloggers, special for me.
Once again, thank you.

Thanks for the article i liked pretty much. Let's check this latest blog post


Xbox One Emulator For Windows
Virtual Box vs VMware : Which One is Best Virtual Machine

Thank you soo much for sharing my post .
Jeans Supplier in Delhi

Excellent read, Positive site, where did u come up with the information on this posting.really awesome guys.
Visit me here just click it.
여성알바