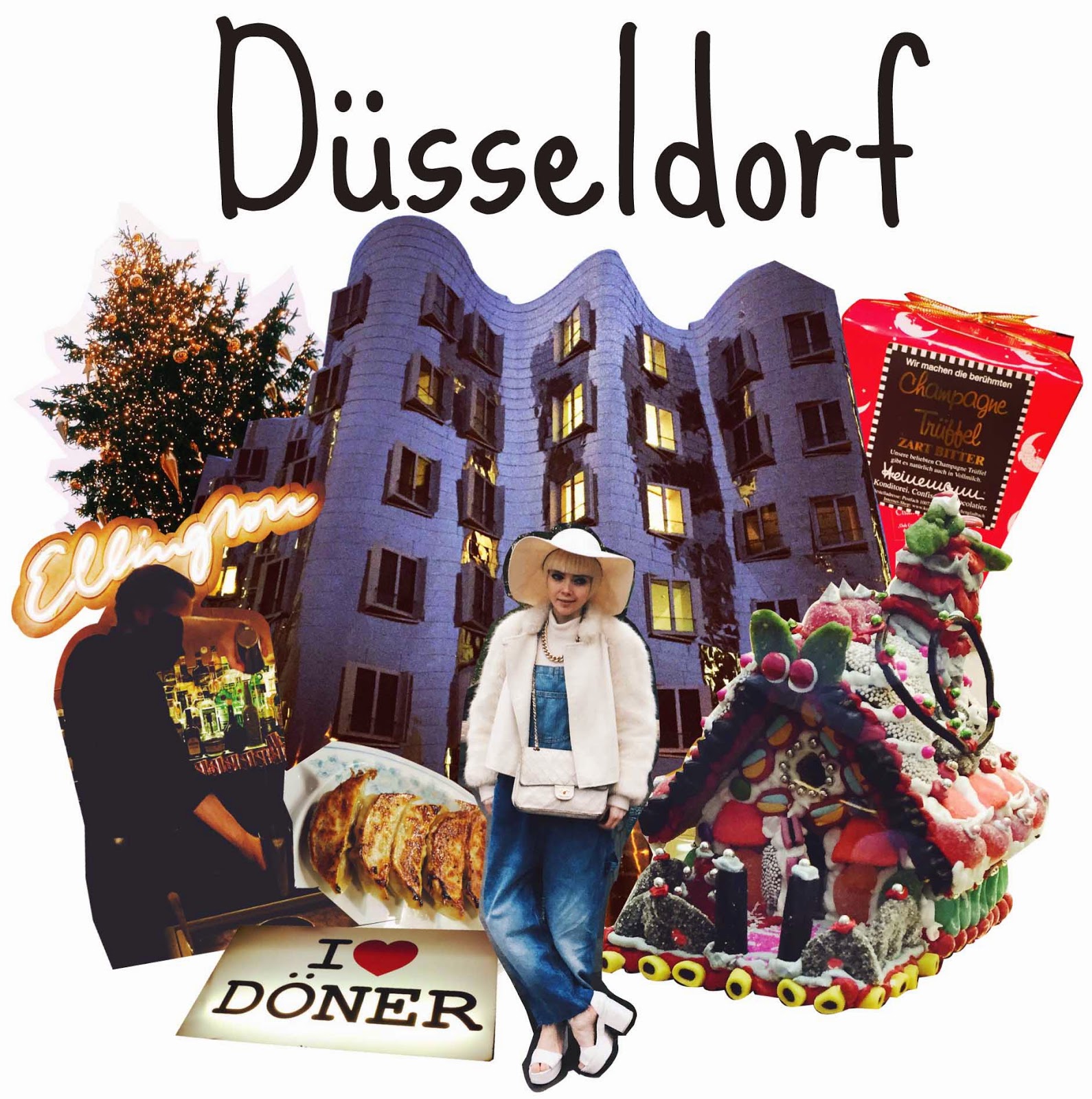 A major pet hate of mine has always been the British perception of Germany, falling almost always into two distinct categories. Indeed either the minute I mention I am part German an obligatory "Oh are you from Berlin - it's so cool there" is thrown at me or I can almost see them picturing a quaint Bavarian village where every inhabitant dons a pair of Lederhosen whilst holding a huge pint of German beer and wolfing down a "Bratwurst".  Of course that is not to say that I hate Berlin nor am I denying Bavaria's existence where stuff like that probably happens ( I wouldn't know as I have never been) BUT Germany shouldn't be reduced to just this. It is after all a huge country with many lovely places to visit and Dusseldorf, the place I probably have closest to a home town after London, is in my opinion completely underrated and much more of a tourist destination than one might think. I took my friend Ella there recently for a long weekend and she was surprised by how cosmopolitan and culturally varied it was. It is almost like a little London with all the shops, amazing food and even better value for money than you'd ever find in England let alone London. I am sounding a bit like the Dusseldorf tourism board but if you ever plan a trip to Germany consider a stop in Dusseldorf, you can take my word you won't regret it! 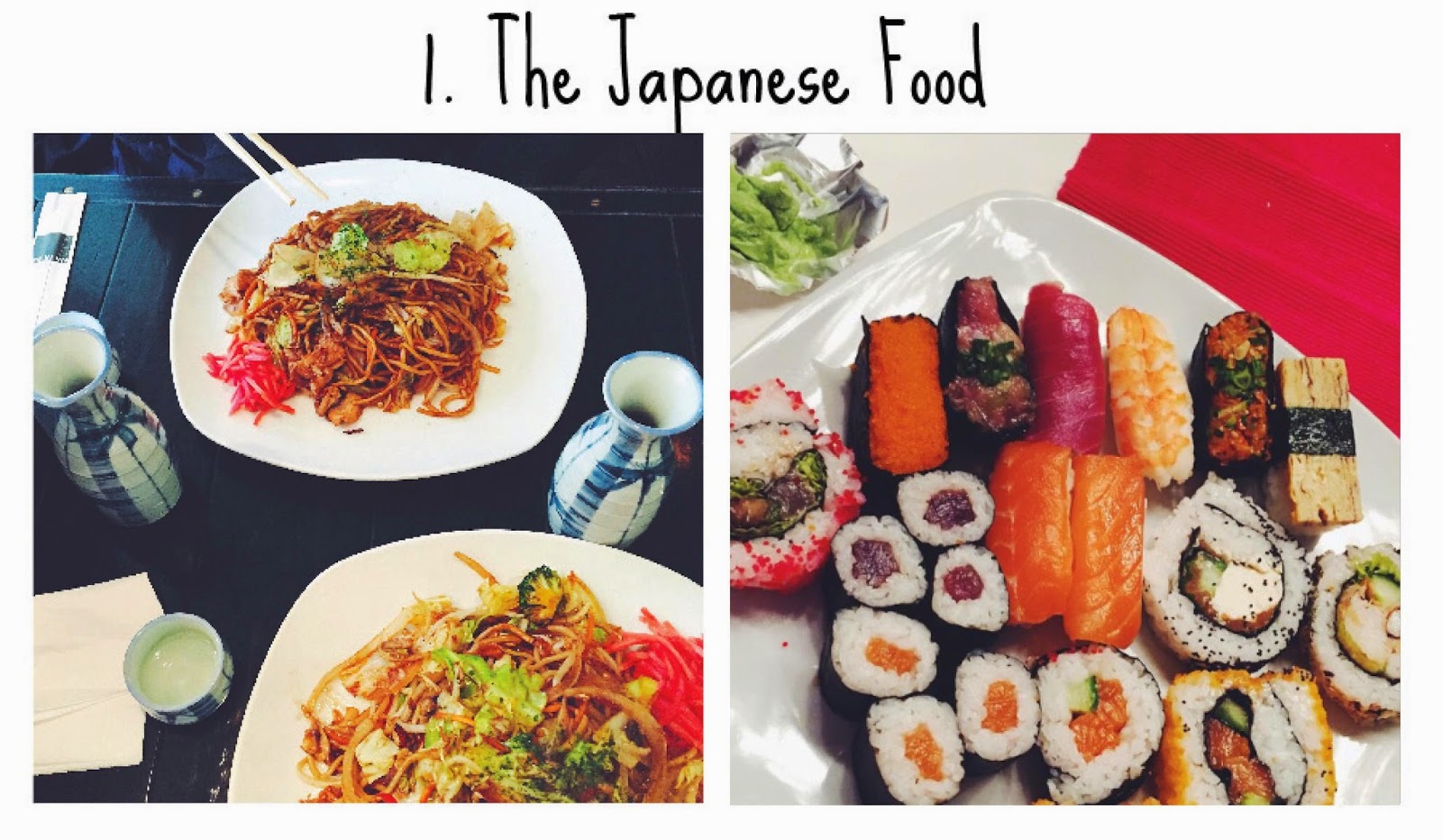 Dusseldorf may not be the first place you would think of for Japanese food but damn it's the best I have had in Europe ( and challenging the food Ella sampled on a recent visit to Tokyo).  Why is the Japanese food here so good? Well a lot of big Japanese businesses have their European headquarters in Dusseldorf and as result instead of the Chinatown we have in London here you get a ' Little Tokyo', a stones throw away from the city centre. Immermannstrasse and the surrounding side streets are lined with Japanese supermarkets, manga shops and of course first class ramen and sushi bars where you'll be slurping up your noodle soup in a truly authentic environment, next to Japanese businessmen, families and with waiters never quite sure what you are trying to order in English or German. My favourite of the numerous ramen establishments has to be Naniwa, without fail the first place I go to on every visit. You may have to queue here but it's not because it's the latest gimmicky restaurant in town - no, people have been queuing here for years and years and do so because of the consistently outstanding quality of food. As some say a good bowl of ramen is medicine for the soul and I can't disagree. The warming broth ( dashi which is incredibly hard to get right), fresh noodles and crunchy vegetables are the perfect combination of comfort, freshness and flavours. I always go for the veggie version but the pork belly which is served with most meaty option is infamous and was greatly enjoyed by my friend. Equally fantastic are the yaki soba ( fried noodles with vegetables), once again with a quality of food that I have never experienced when trying Japanese cuisine in London. Yes, we now have a few ramen bars like Tonkatsu but they have taken the idea of this old Japanese tradition and tried, at least in my opinion, to make it "too cool" to fit in with the at times overly pretentious London restaurant scene. Naniwa is just a noodle bar but it is bloody fantastic at that and a real gem I wish I had in London. You can also get pretty good sushi for great value in Dusseldorf, my favourite Maruyasu letting you pick and choose exactly what you want in your sushi box, over 20 or so different rolls and nigiri that offer a variation you won't find at Wasabi or Itsu and with a quality of fish and rice you would be paying a lot of money for anywhere else. 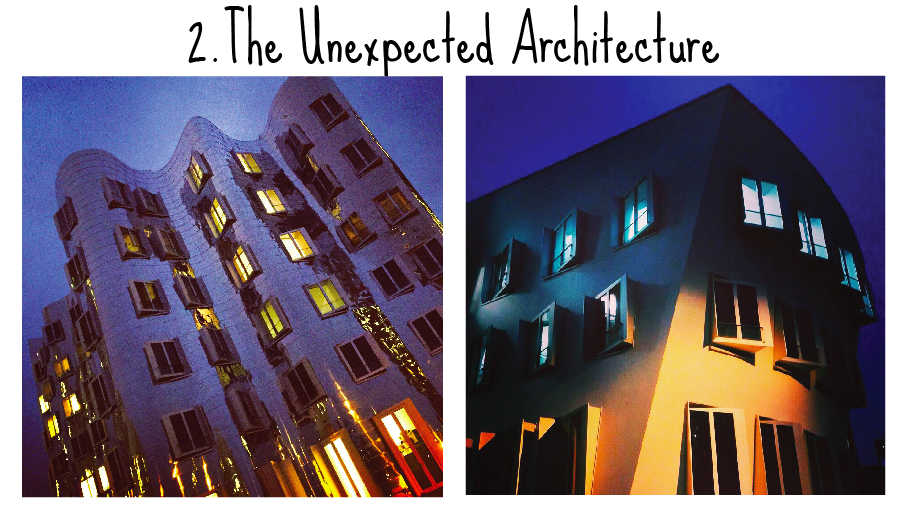 The old harbour in Dusseldorf underwent quite the transformation a few years ago once the heavy industry that used to be based there slowly disappeared . However instead of replacing those slowly decaying buildings with bock standard new developments like is sadly the case in many bigger cities ( I can't say I am a massive fan of the cooperate architecture in Canary Wharf), the town council let loose famous architects, amongst them Frank Gehry, who transformed the area into something quite special. Overlooking the long Rhine river, the collection of buildings that now make up the Media harbour is absolutely stunning, my favourite as if dipped in silver and reflecting back the city lights at you. It's the perfect place for a night walk and shows that demographic and economic change don't have to mean that our cities have to become ugly and bland seas of concrete. 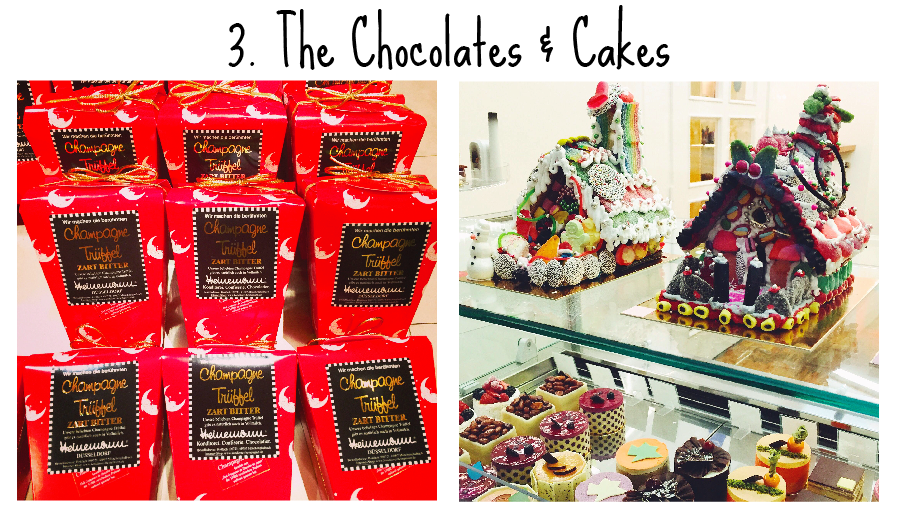 One of the things I miss the most about Germany are the fantastic chocolate and cakes. While here we tend to have to rely on Cadbury for our chocolate fix ( and maybe a continental Lindt treat if we are feeling snazzy) and consider a Victoria sponge as a decent cake ( I am sorry but it is just sponge with cream and jam in it- hardly a baking masterpiece!!!), Germany has a long tradition of patisseries and chocolatiers, mostly family run, that produce incredible sweet results. In Dussseldorf the probably most famous address for this is Heinemann, making and selling cakes and truffles in the city centre for decades. Their speciality is the champagne truffle which in fact can rightly claim to be the best in the world after winning a global taste competition. I always go for the dark chocolate variety - not too sweet and with just the right amount of champagne centre, something that most alcoholic chocolates fail at miserable with their overwhelming and fake taste. You can almost taste the craft that has gone into each truffle and I have to say I have yet to find a better one anywhere else in the world. They also offer an array of other cakes - a champagne torte comprising of five layers ( biscuit base, champagne butter cream, vanilla sponge, dark chocolate butter cream, chocolate sponge), so sophisticated, full of flavour and an absolute steal at €3 a slice that you will never look at the British Bake Off in quite the same way again. A new kid on the blog is "Pure Freude" in the old town. Sleeker in its appearance and more experimental in the beautiful cakes that are baked on site, it again shows baking as an art and has made me return many times to see what new flavour combinations they have come up with ( my favourite so far a little cake with three types of caramel in form of a mousse, liquid centre and shell that blew my mind). They also do very good macaroons that once again veer away from the classic "Laduree" flavours and which are an absolute steal compared to what you pay for a box in London. One reason why I am expecting a goodie filled package from my mum for my birthday next month! 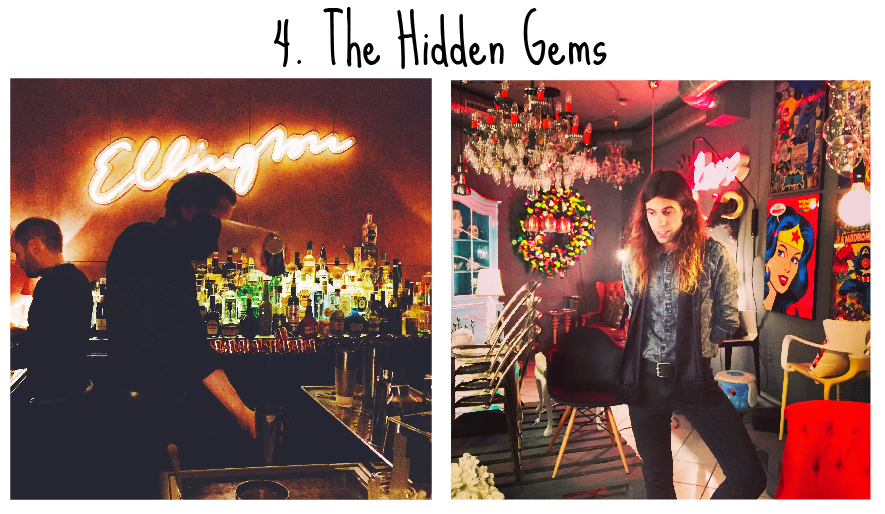 What I also love about Dusseldorf is that it has a few select hidden gems you'd really expect in East London rather than the capital of Northrine Westphalia. One of them is the Bar Ellington. Not in the most obvious location away from the centre, this bar is worth seeking out and challenges some of the best cocktail bars I have been to in London like Nightjar and Happiness forgets. It's open till 3 am, late opening hours for a bar that I think London lacks, and the atmosphere is cool, laid back and with a bit of speak easy vibe. Cocktails are expertly made in front of you and under the ten euro mark, combining unusual flavours but also serving up classics that many, many cocktails bars I have visited in my time fail to do. Lastly there is a little, bright and slightly crazy paradise in the middle of town, run by two of my friends. 'Vaseline' is a shop that sells anything and everything that it's owner Rolf Buck finds on his travels or customises/makes with his partner Raffael in their studio. From secondhand furniture re-uppolstered with incredible fabrics, to deer heads painted fluro pink, to beautifully curated jewellery and accessories from all around the world, Vaseline is a magpies paradise and the realisation of someone's creativity through the medium of a shop which inspired me every time and which I haven't seen anywhere else.

So come on give Dusseldorf a visit, who wouldnt want to try the best Champagne truffles in the world?!

The chocolate alone makes me want to visit :)

A Forte For Fashion

That made me want to visit Germany a lot, I'm gonna bookmark your post it will sure come in handy next time I want to plan a trip somewhere ;) Thank you !

I loved this cute post, thank you for all the information.
I JUST NEED TO SAY THAT WE DO NOT WEAR LEATHER PANTS AND DO NOT EAT BRATWURST ALL DAY LONG. I am from the northern part of bavaria, and people have such strange misconceptions about germany, but seriously, we are normal people and don't do all that weird stuff we are assumed to do by other nations. Thank you for mentioning we should not be reduced to this. There's more to find in Germany than beer and bratwurst.
Thanks!

I bought my favorite bag at https://www.justfor5pounds.com Super stylish!