A Love Letter To Fashion. 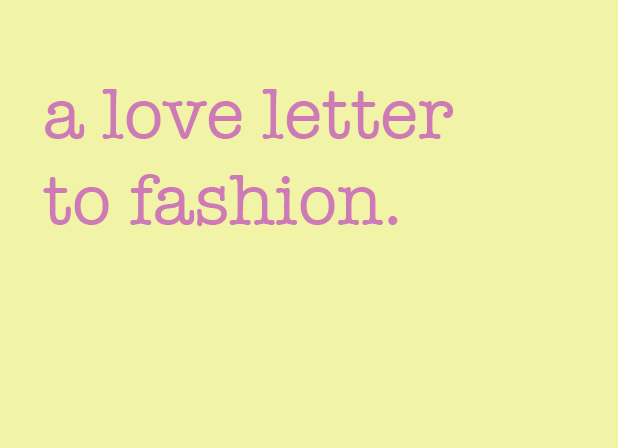 Fashion has always been an integral part both of my being and of life itself for me, far removed from the consumerist, shallow and superfluous concept it is often portrayed as. Nowadays one is at an instant labelled as intellectually inferior for working in this industry or for having a strong interest in it yet as Mark Twain once said  “Clothes make the man. Naked people have little or no influence on society”.  Clothes are not just simply pieces of cloth for me  but carefully engineered by designers more akin to artists, emblazoned with patterns deeply rooted in tradition and with a fundamentally underestimated role in the everyday functioning of society. They are imprinted like the patterns that adorn them with an invisible and unpredictable role, determining social hierarchies, underlining significant political or economic change and holding an untold power over the way we act and are acted towards. One cannot formulate any explicit conceptual criteria or standards for fashion, and yet fashion offers a “norm” according to which individuals can orient their actions and choices without suppressing their individuality. Of course I buy into silly trends and in no way would I deny falling victim of certain looks ( indeed l can’t deny owning some of the pieces so wonderfully sarcastically portrayed on tumblr shit fashion bloggers wear) but clothes are much more to me than what a surface of shiny magazine covers and cheaply produced, quickly disposed mass fashion might suggest.

Every week I at least attempt to create an outfit that just “works”, a marriage between cuts and colours, different items of clothing and accessories, in a combination that is both harmonising and surprising. Starting off with one piece I create a picture in my head of what I try to achieve and, in my eyes at least, the final result is something like a  piece of art. Yes, you may say that this putting importance on something we simply wear to essentially maintain our decency but it can do so much more.  Historically and culturally fashion has had a fundamental and undeniable impact that none of us can escape. Anti-fashion formed the backbone of all major youth subculture, from the hippies to the mods, it offered a way to go against the established look of the masses and fuse creativity and protest without having to revert to violence Coco Chanel with her trouser suit and sporty look probably aided feminism and sexual liberation of the everyday woman more than a few, no doubt completely committed but marginalised, activists and while we lack a modern day Picasso designers like Alexander McQueen in his far too short career and  Ricardo Tisci created and still create fantastical design spectacles that can be called nothing short of genius. Even on a more personal level  every major event in my life is connected with and remembered by an outfit, the good dates, the days when tragedy stuck, my first university exam ( I wore Christopher Kane), for better or for worse clothes have been my constant companions that have reflected different stages in my life, different insecurities and different sources of inspiration.

They are my acquaintances that at an instant can change my feelings about a day and though of course fashion may play a bigger role to me than to most no one can deny how if we like it or not we all participate in it and should rather embrace and appreciate rather than constantly scrutinise  its continued existence. As Emmanuel Kant already analysed in the 19th century fashion is in a perpetual state of coming into being and dying, a dynamic and unstoppable force that continuously reassesses the past, anticipates the future yet lives in the moment and it will continue to excite me everyone morning to put on one of the outfits that is as much part of me as my stubbornness, my slightly German twang and my deep and unshakable sarcasm.
Posted by Stella's wardrobe at 08:51

I really enjoyed reading this and I agree with you.

Many kids at school like to tell me that I'm shallow for having an interest in fashion and every time I try to defend myself, they like to say that clothes are just clothes. However, all of us get dressed and clothes have the ability to tell the world something about ourselves in ways that words can't. Then when you get to designers like McQueen and Galliano, you have to admit that they're artists.

this is exactly how I feel about fashion and my joy in wearing clothes. Couldn't have put it better <3

The typical shopper is aged 20-40, she says, although products such as the "ikon shopper" – £29 bow-festooned bags in a variety of sweetshop colours – are used by all ages. Fashion