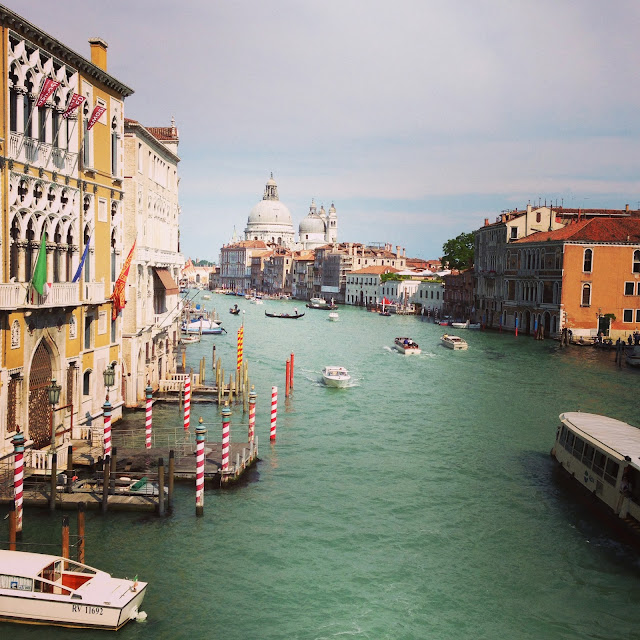 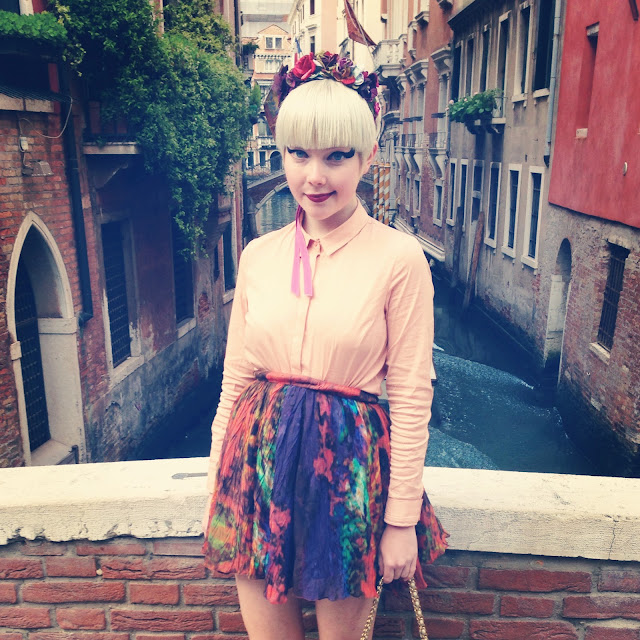 I was fortunate enough to be invited to the opening of the Venice Biennale this year and in the few days there had the absolute pleasure to not only discover the narrow cobbled streets and wonky bridges that form the heart of Venice but also experience some of the finest and most innovative works of art both old and new that were exhibited around the town. It is impossible to summarise all the impressions I was able to gather in those three days and of course not all art was to my taste, nor can I call myself a real art critic, but here are a few of my highlights. 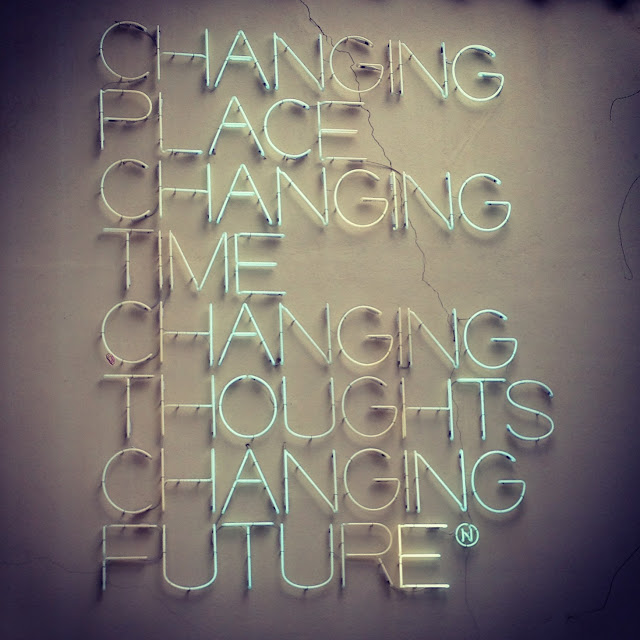 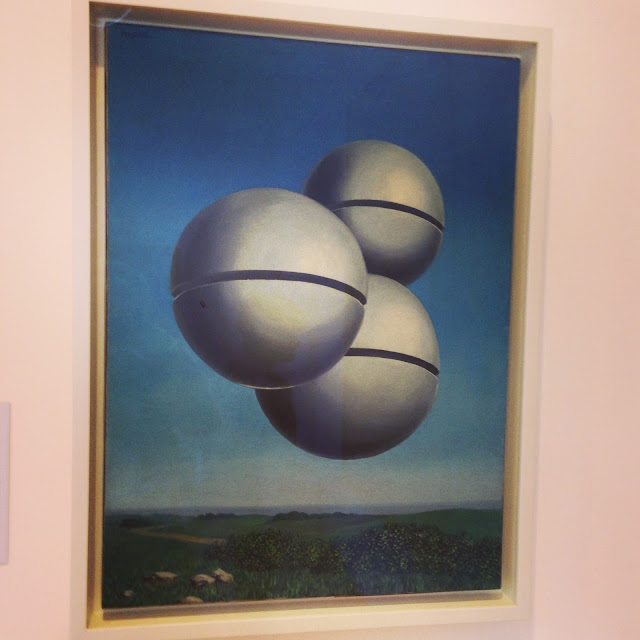 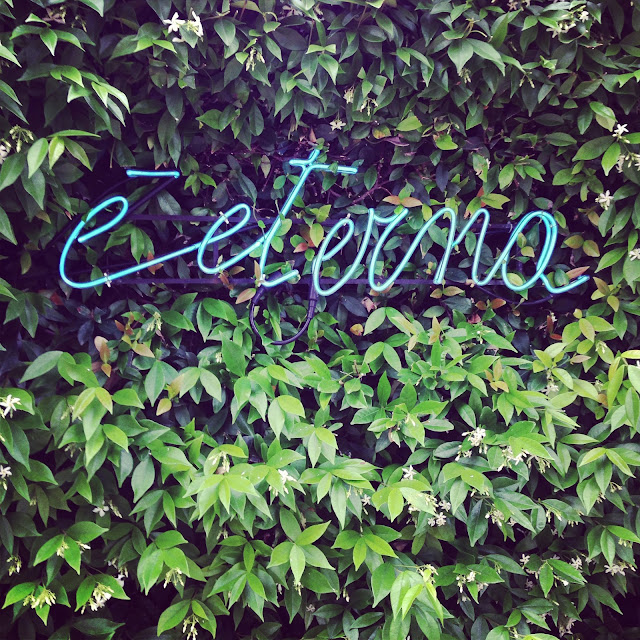 Peggy Guggenheim may have been the ultimate Lady of Leisure, setting up home in an amazing Venetian Palace, conducting several illicit affairs with famours artists and taking her breakfast everyday on her very own stone throne in her courtyard, but the resulting collection of art she was able to amass is one of the best private collections in the world. Following her death the palace with all its art treasures was carefully converted into a museum and though small in size contains some of the finest artists of the 20th century with everyone from Jackson Pollock to Picasso and Dalí hanging on the wall of the old palace while maintaining the personal touch that the lady herself put into making this collection. Far less sterile than your average museum, in fact Peggy is burried in the courtyard with all her cats including one fittingly titled Madame Butterfly, the place itself has almost become a work of art itself. 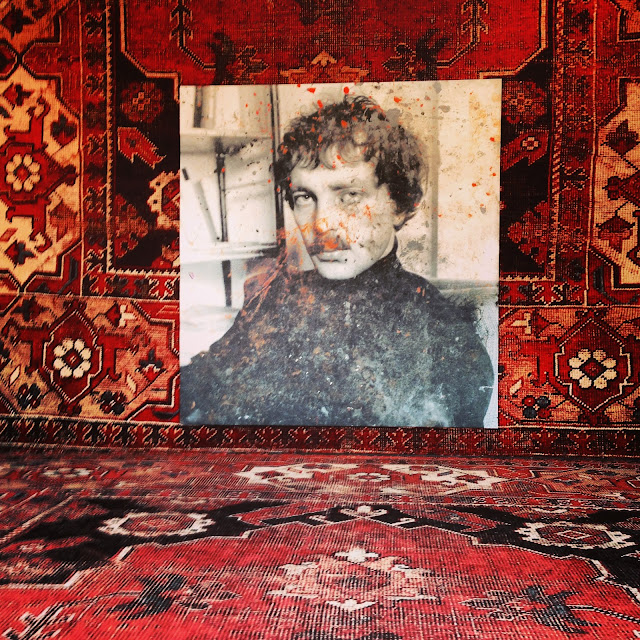 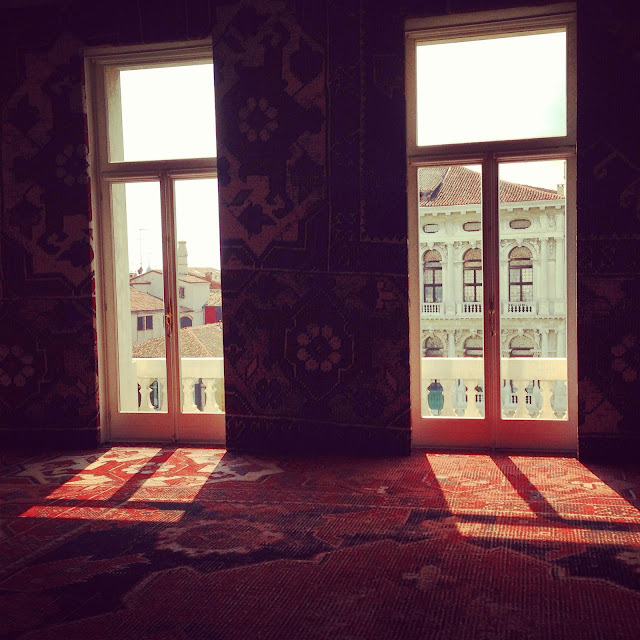 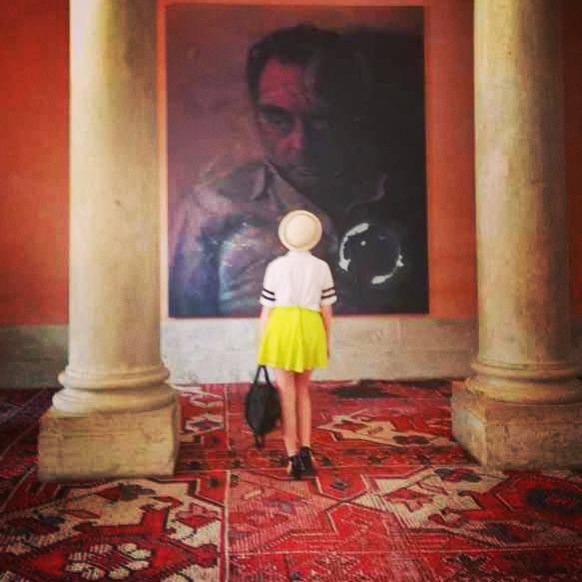 The most visually stunning exhibition no doubt was Rudolph Stingel's at the grand Palazzo Grassi right by one of the main canals of the city. The Italian artist "carpeted" the old palace wall to wall with a dizzying, almost pixelated, carpet print to play with perception of space and to  give his paintings a uniform yet at the same time incredibly contrasting backdrop rather than a simple white wall. At times almost overwhelming, the three floors of exhibition space completely absorb the visitor and play both with Venice's history and the technical possibilities of modern art techniques to create a wonderfully unique and captivating exhibition. 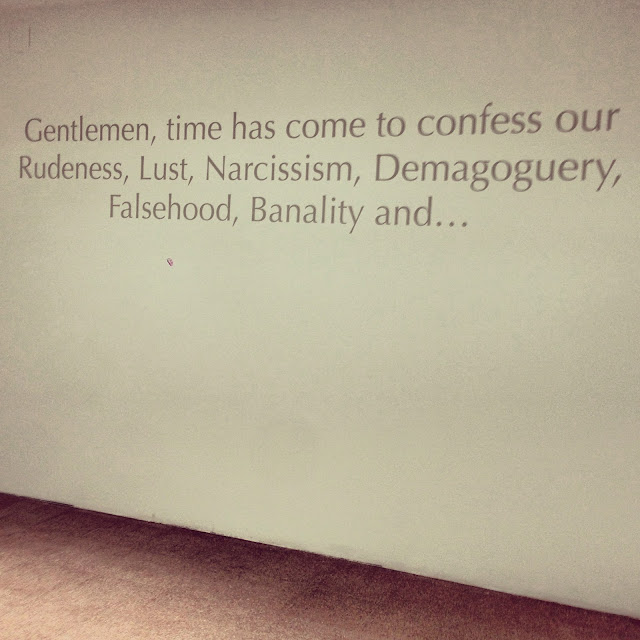 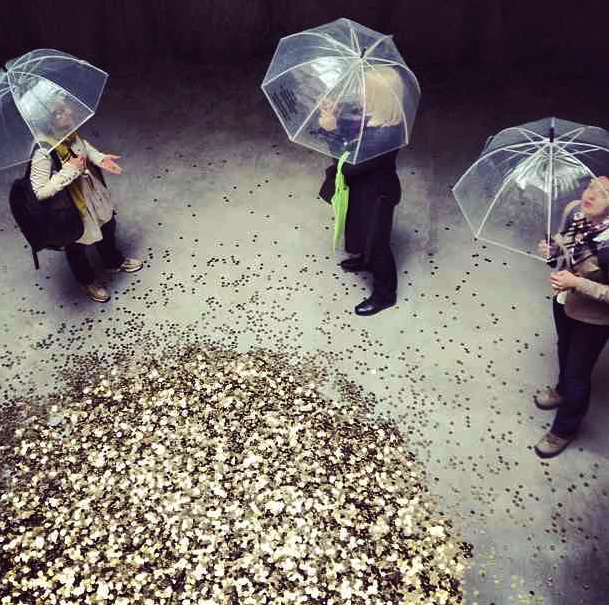 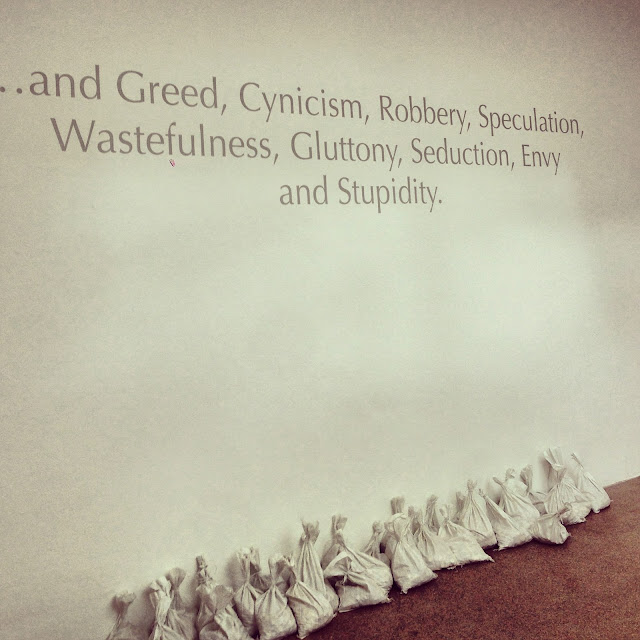 The Biennale can be overwhelming with its endless choice of pavilions, each country attempting to present its best young artistis, the most innovative message and  awe inspiring presentation to get the art world talking. The Russian pavilion succeeded in doing exactly this and for me was the best pavillion on show this year. Its critique of capitalism and portrayal of a money obsessed society, gold coins raining onto the visitors and businessmen in suits glumly starring into the distance, showed a Russia beginning to deal with the nouveau riche society and crass displays of wealth that have emerged since the fall of the USSR. The pavilion's self critical look at itself as nation definitely hit a wider nerve of our modern time and did so using visually powerful images that stunned the visitor.

Ai Weiwei at the German Pavillion 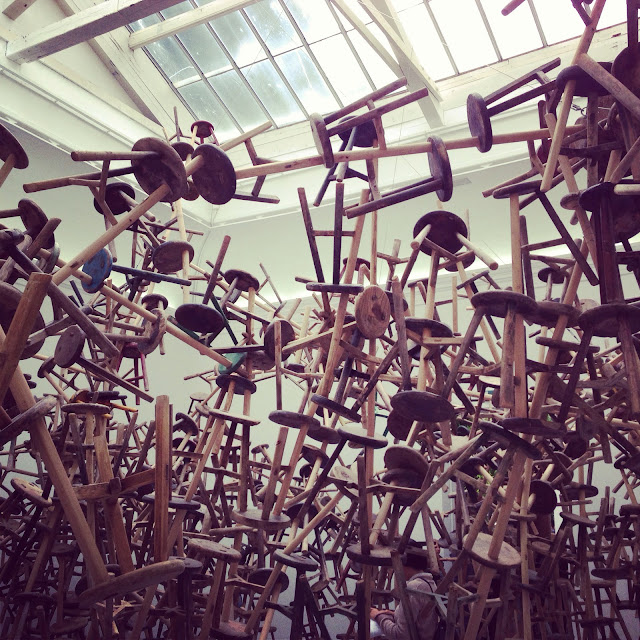 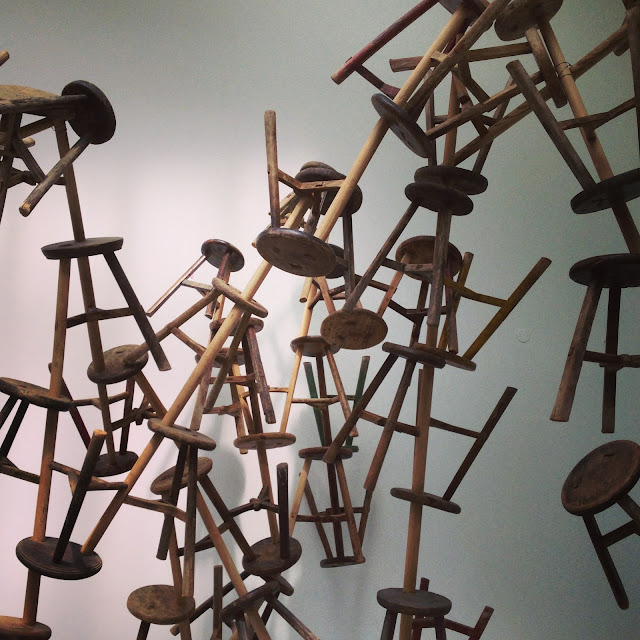 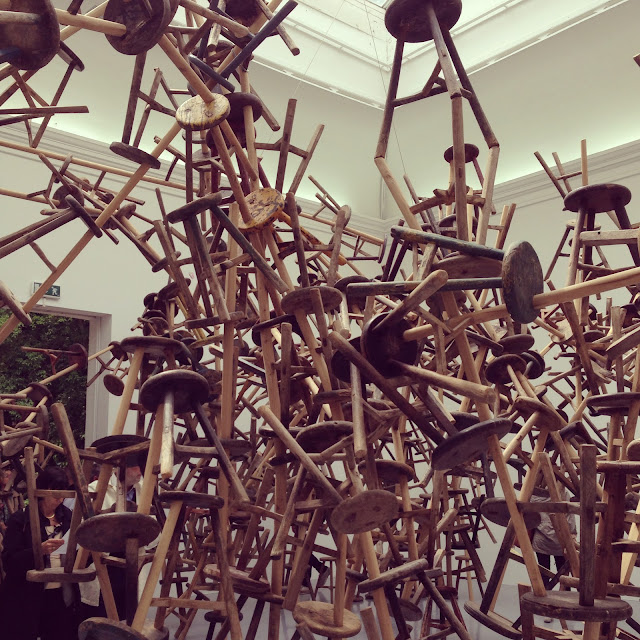 Ai Wei Wei is one of the most famous living artists in the world today and this year interestingly  showed some of his work in the German rather than his native Chinese pavilion at the Biennale. Highlighting an increasingly globalised and interconnected world and particularly the consumption of goods without regard to their origin, his installation Bang featured complex towers constructed out of 886 three-legged wooden stools made in China by traditional craftsmen. Walking through this maze of chairs, each unique yet part of a beautifully constructed chaos one could not help but question our low regard to the goods we consume everyday. 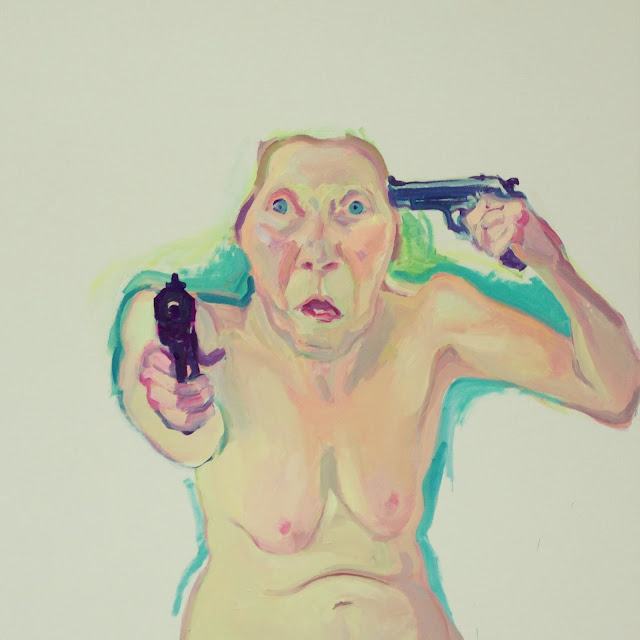 This painting was in the main exhibition space at the Biennale and though the artists name sadly escapes me it is without doubt the most powerful piece I saw during my time there . Encapsulating a desperation that we have all faced at times, both self loathing and hateful towards what surrounds us, in its frankness it succeeds where other art often fails, capturing human nature with a few paint strokes.
Posted by Stella's wardrobe at 09:47