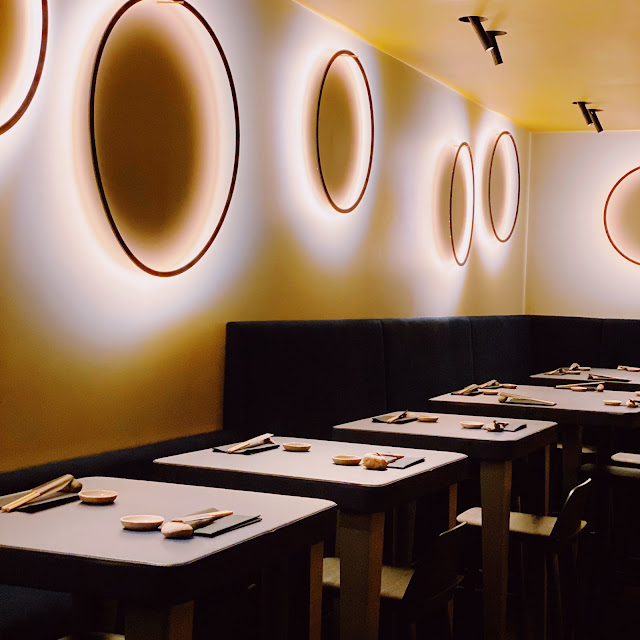 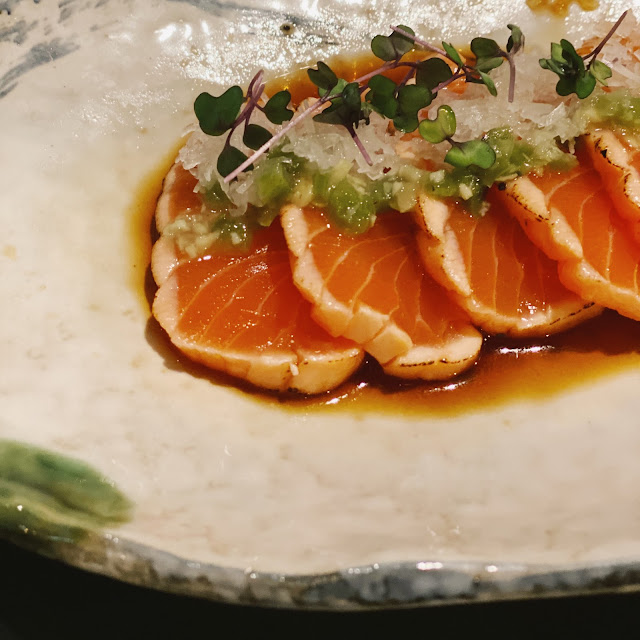 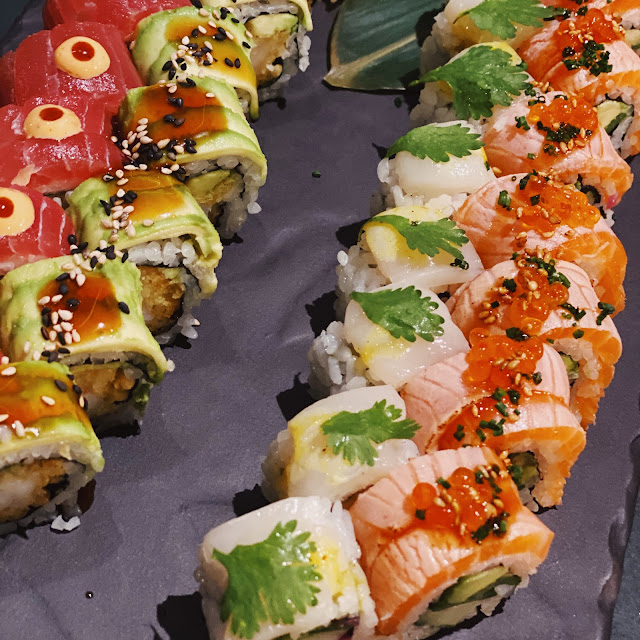 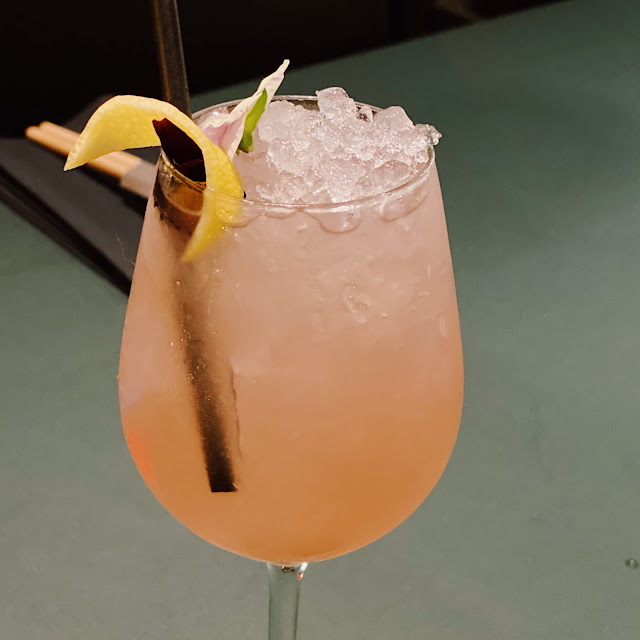 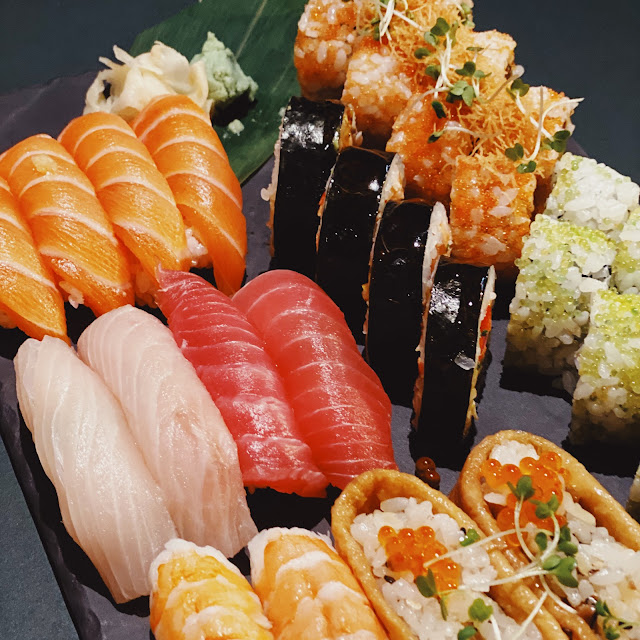 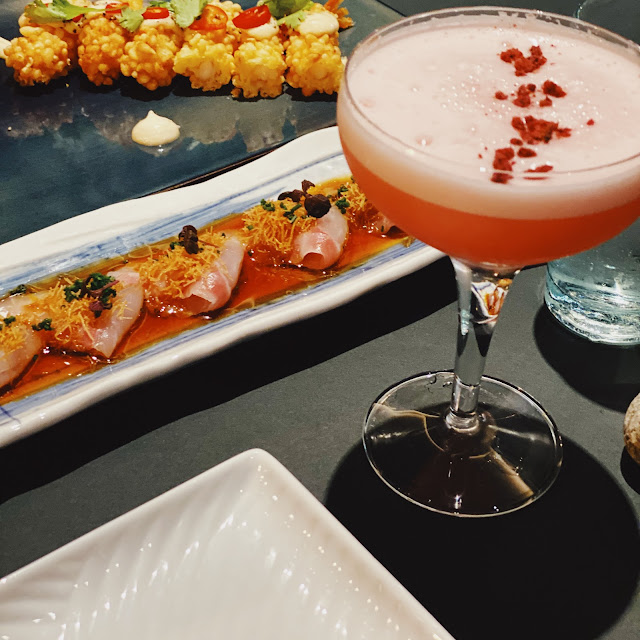 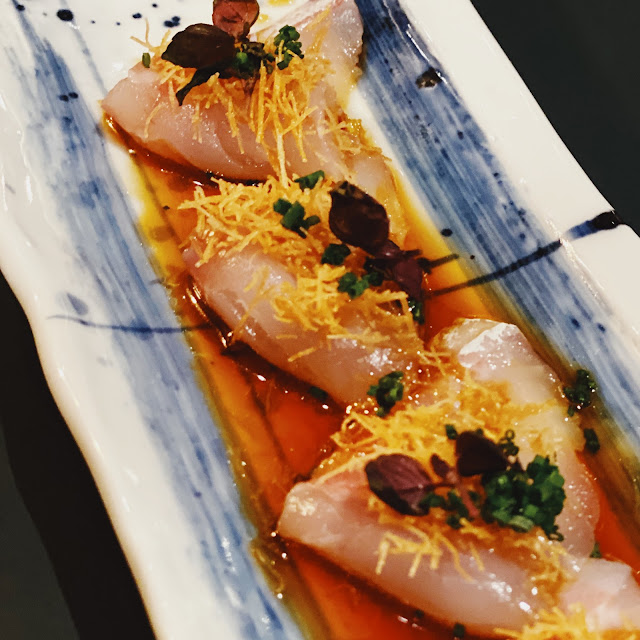 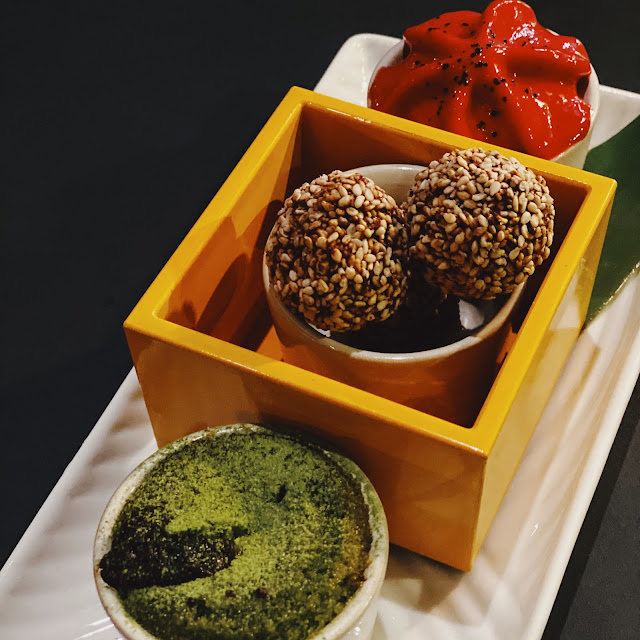 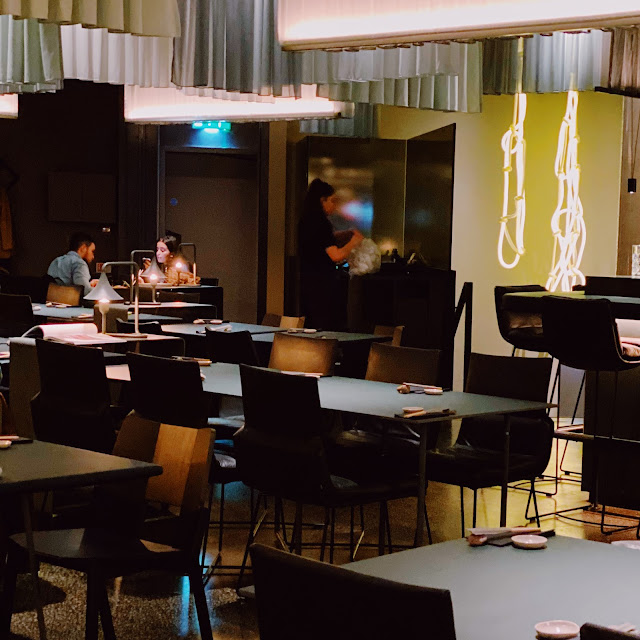 Finding tasty and well made sushi in London is far from easy. Of course there is the Itsu or Wasabi kind which I personally do not consider to be proper sushi and if you are happy to splash several hundreds of pounds I am sure you can find a tiny sushi bar where they fly in their chefs from Japan and the dinner is a once in a lifetime kind of experience, but I had so far struggled to find a sophisticated and atmospheric spot for sushi in London that also delivers in terms of the quality of fish used and sushi making expertise.  A perfect balance between authenticity, affordability and fun dining which I was lucky enough to experience at the newly opened Sticks'n'Sushi in Soho.

Sticks'n'Sushi had been on my radar ever since they opened their first London outpost a couple of years ago in Wimbledon but until last weekend I had never quite managed to make it there. The stylish chain of restaurants, now with 9 joints across the UK, originally hails from Denmark where it was founded by Danish-Japanese brothers Jens and Kim Rahbek Hansen in 1994, and you can definitely get hint of the Scandi chic fused with fantastic Japanese cooking from the minute that you enter. Indeed that makes Sticks'n'Sushi so special in my eyes. It may be a “chain” in the sense it has several outposts and pretty spot on branding but it doesn’t feel like it when you dine there, indeed for the very fair price you pay the whole affair feels more Nobu than Wagamamas and every little detail has been considered to make it a memorable dining experience.

I visited their brand new Soho restaurant which is located at the Soho end of Carnaby street, an area that has had a total transformation in the last half year, being turned from a bit of a no man’s land between the famous shopping street and Soho proper into a hotspot for design, with a newly opened Ganni flagship store and an array of cool boutiques and now of course also a fab new place for dinner! Location thus couldn’t be better if you are in central, though it feels still tucked away enough to avoid the worst tourist crowds and once you enter the slick and serene dining space you will anyways forget that you are a 5 minute walk away from the nightmare that is Piccadilly Circus.

Indeed the mostly black dining room with neon light accents and origami inspired ceiling adornments, is an oasis of stylish calm and I was instantly greeted with a welcoming smile by one of their staff, a fantastic level of service that was continued throughout the meal. I especially loved the hot towels they brought before we started our meal (and they may or may not have been rather sweet when I managed to spill my entire cocktail across the table but let’s not delve into that further..)

Anyways, while I waited for my friend to arrive I perused the extensive food menu (which comes with picture of every dish, a fact I LOVE as it saved me from having to scan the dining room to check what other people have ordered - I mean I want to know what I am getting before I am ordering it after all!) as well as their drinks list and boy do they nail that as well!

Cocktails in fact were another stand out element alongside the fantastic sushi, Japanese inspired but not in a gimmicky way. You can really see they had a team of expert bartenders work on these before they made the menu and every cocktail I sampled was pitch perfect in terms of composition, presentation and flavouring. My favourite? The Rozu martini - Haku vodka shaken with raspberries, lychee, lemon, egg white and rose blossom water as well as the refreshing Blossom Spritz - a floral mix of Finlandia vodka, hibiscus tea, goji berries, lavender & yuzu, topped up with Prosecco, although the entire menu was so enticing sounding it was almost impossible to choose and made it easy to be a little more adventurous than my usual standard white wine order.

Now onto the most important part of any meal out…the food! You have several options and ways of dining at Sticks'n'Sushi. There are set menu options for different budgets which include a mix of starters, sashimi, sticks (grilled meat, fish or veg on wooden sticks) and of course sushi which is great if you want a taste of everything without having to think to much, or you can go a la carte like we did on this occasion, ordering your way across starters and then moving on to the fab sushi platters they also offer.

Starter highlights included the raw marinated Suzuki (Japanese sea bass), served with chives, truffle oil and shiso which was a silky dream, the Kani Korokke- crab croquettes with wasabi Cesar and their Shake Carpaccio- marinated raw salmon with miso aioli and trout roe, in a chives and lime marinade. As you can tell Sticks'n'Sushi doesn’t do 100% Japanese only cuisine but here the fusion with Western elements like truffle really works as it is never done in an OTT way and the quality of ingredients at the core of each dish is kept consistently on point.

We then proceeded to, perhaps, go a little cray on the sushi order but heck everything looked so amazing, I didn’t mind the fact that I was ready to be rolled out by the end of the meal. Indeed our ‘Table For Two’ sushi platter was a great 'best of'of your classic nigiri and maki, with some outstanding spicy tuna rolls to boot. Presentation like for the rest of the meal was flawless and the wasabi so fresh it left us gasping for air when applied to generously.

Our Maki Maki platter was equally dreamy, with a great mix of their signature rolls, with my favourite being the ‘Hells Kitchen’ roll - a tasty combo of tempura shrimp, avocado and spicy sauce, topped with tuna and barbecue sauce, closely followed by the ‘Shake Aioli’ roll- snow peas, avocado, miso aioli and cucumber, topped with seared salmon and trout roe. This was inventive, fantastic sushi that delivered on every front and undoubtedly was the best I have had in London, Sticks'n'Sushi may have expanded quickly in recent years but now I know why and not an ounce of their commitment to high quality and great food has gotten lost along the way.

We barely had space left to breath but could not say no to at least a little bit of dessert which worked a dream as Sticks'n'Sushi takes a tapas style approach to all things sweet. Each little dessert is £3.5, three for £10 (which was perfect between two very full humans) or £30 for a taste of all of them which is great if you are with a group. What do you get to try? A tantalising mix of interesting desserts, once again beautifully playing on Japanese flavourings and updating them for Western palette in 2019.

I adored the dark chocolate truffles with caramel centre and coated in toasted sesame as well as the rather luxurious white chocolate mousse topped with liquorice and raspberry foam while my dining companion adored her Matcha financier. Again these were presented and executed flawlessly and definitely were no afterthought like desserts can be in some fusion restaurants.

Overall I can’t recommend Sticks'n'Sushi’s new Soho location enough. We had a fantastic evening in a high end environment without a crazy price tag attached. Scandinavian attention to detail and design meets Japanese skills here, all with a modern flair that makes for very exciting cooking. Amazing cocktails, service, sushi and desserts, all in a stylish environment- you can’t ask for much more and I do hope Sticks'n'Sushi will open an east London outpost soon too, they definitely have a new committed fan here.
Posted by Stella's wardrobe at 10:09