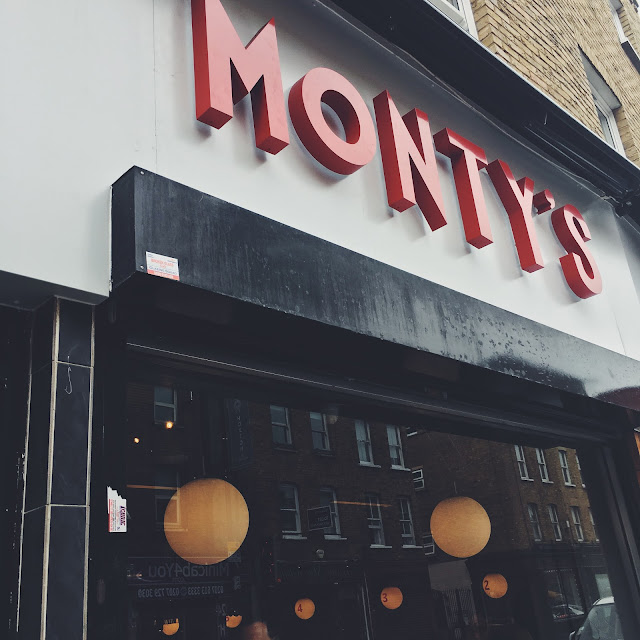 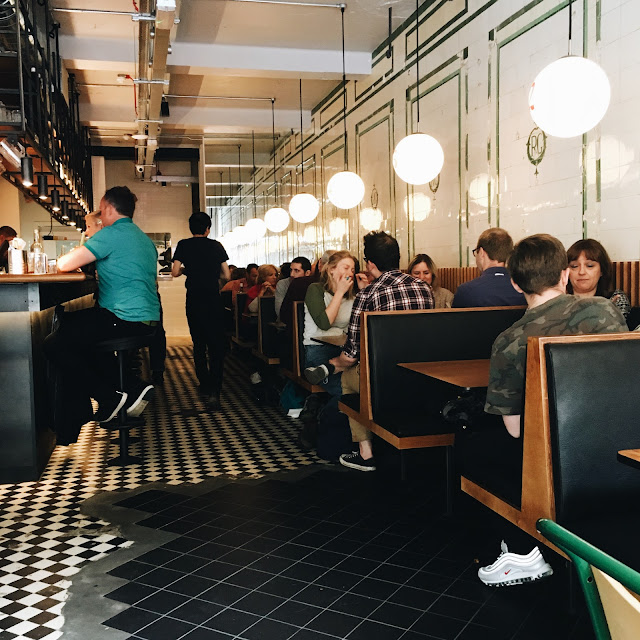 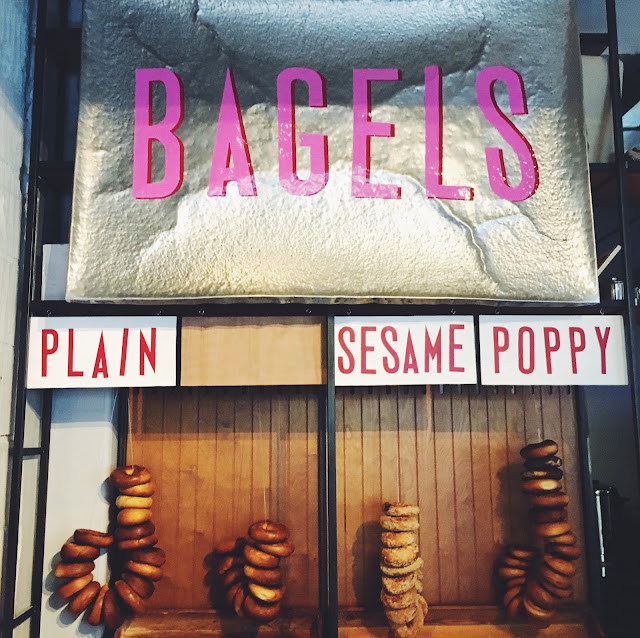 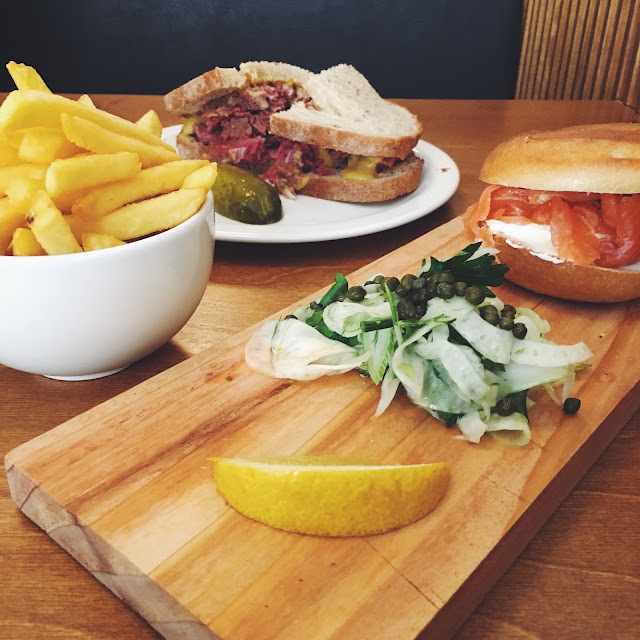 I have been patiently waiting for Monty's Deli to open on Hoxton Street for months now. What deserves this level of anticipation you may ask? Well I had quite simply fallen in love with the Jewish deli culture discovered on my trips to New York in the last couple of years. These often unassuming delis just had a certain warmth about them and served hearty, delicious Jewish fare that no matter how bad your day was always managed to leave you with big fat smile on your face once you had tucked in and somehow made everything seem a little better.

My absolute favourite back in NYC was Russ & Daughters, a deli set up by a Mr Russ in 1914 and kept open over the decades by his lovely daughters stepping into his footsteps, in my eyes at least serving some of the finest brunch and bagels one can find anywhere in the world. I have been dreaming of their offering ever since, particularly craving their fantastic brunch option of "Lower Sunny Side"- a dish served at their cafe around the corner from the smaller and takeaway only deli, consisting of two fried eggs, Gaspa Nova smoked salmon and potato latkes as well as their chewy yet delicious bagels filled to the brim with cream cheese. Yet sadly and rather bizarrely London simply did not offer anything nearing this sort of offering let alone standard. Monty's first permanent site however was thankfully finally about to change that.

The duo behind Monty's, Mark Ogus and Owen Barratt, were inspired to start this venture by Ogus' grandad, who, you may have guessed, was called Monty and who grew up in East London's flourishing Eastern European Jewish community during the 1920's, a community that traditionally loved nothing more than good nosh (or food to you and me) and celebrating the ritual of eating within their families. While the East End Jewish community began to slowly disperse around the country and indeed the world in the decades to follow, the traditional family recipes of curing meats, making pickles and shaping bagels were thankfully passed down through the generations and at Monty's are once again used to feed and please the masses in a unique and delicious way that needs to be preserved for generations to come.

Indeed Monty's clearly is a labour of love, not only because it serves dishes that have been prepared by the same families in the same way for generations, no, this restaurant is also basically built on the loyalty of its patrons. Starting off by selling different kinds of salt beef sandwiches at the foodie mecca that is Maltby Street market, these guys successfully ran a crowdfounding campaign which raised enough money to enable them to open the Jewish delicatessen and proper dining destination which London so desperately laced and heck they couldn't have done it better.

In fact the finished space easily holds its when compared to the likes of New York's Russ & Daughters- a 21st century take on those distinctive 20th century delis dotted around New York, chic yet inviting and aware of it's heritage. It's the kind of place you'd want to to take your best mates, your mum AND your grandparents, in fact anyone worthy of sharing a great and warming meal with that you won't forget in a hurry. There is a takeaway bagel counter which I am going to be frequenting on more hungover occasions when only a cream cheese and lox bagel will do, a beautiful counter space and a long line of booths that once again reminded me of New York in the best of ways. We settled in a booth this time, ready to explore Monty's weekend brunch menu (though they serve an equally enticing dinner menu during the week that showcases Eastern European culinary roots with nods to Monty's American deli counterparts).

Of course it is the salt beef sandwiches that Monty's is already famous for amongst the London foodie scene, and rightly so as my dining companion couldn't stop gushing about how fantastic hers was, with a variation of this classic to suit all tastes on offer here, whether you like your salt beef quite simply on rye with mustard, with added Sauerkraut for heat or with a little bit of added cheese, though I am pleased to say there are also plenty of menu options for none meat eaters like me as well. Indeed my bagel, baked to chewy perfection, filled with a generous helping of smooth cream cheese and topped with the dreamiest lox (lox being a slightly less salty, more luxurious and silky alternative to smoked salmon traditionally used in Jewish delis as bagel filling) was one of the best I have ever had even when compared to what's on offer at the bagel shops tourists flock to in NYC for supposedly being the best of the best. Served with a surprisingly delicate and delicious pickled cucumber salad which came sprinkled with capers, it was simply divine. On the side we enjoyed some proper, none greasy, fries as you seldom find them in England, dipped in some Russian dressing for extra zing, and in my case washed down with some fittingly fresh orange juice. For me this was as close to a dream brunch as one can get especially when I thought I'd only be able to enjoy something of a similar standard after a 6 hour flight across the pond.

Monty's is truly one of a kind, serving heartwarming, unpretentious and delicious food that makes you happy, preserving a culinary tradition and dining experience too wonderful to loose and not share with the world. Take your loved ones asap, you won't regret it. 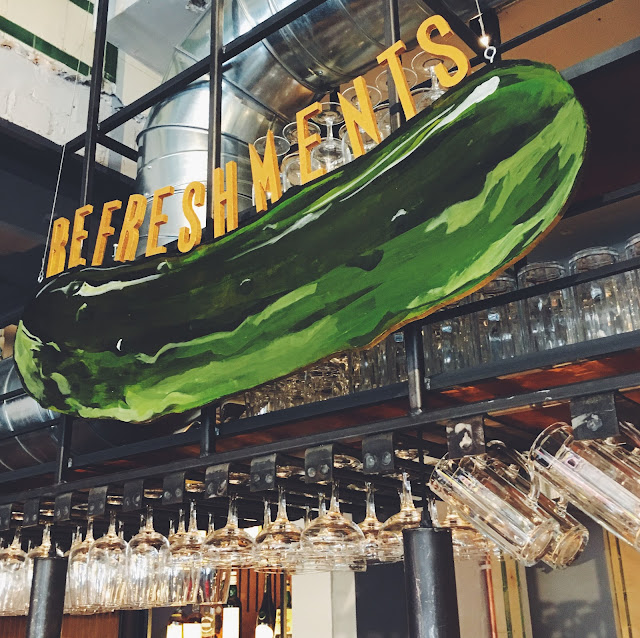 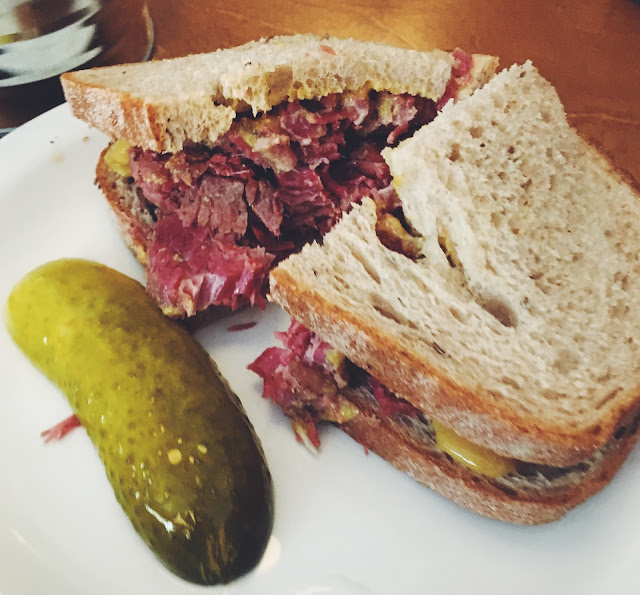 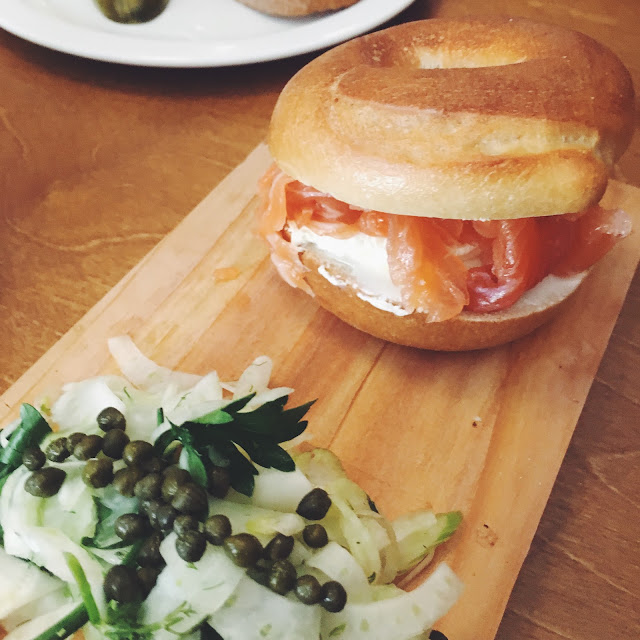 Interesting article! Thank you for sharing them! I hope you will continue to have similar posts to share with everyone!
bloxorz

Shop for Sweaters online at BrandCruz.com. This pullover sweater from Eileen Fisher is a timeless wardrobe classic you'll go to season after season.