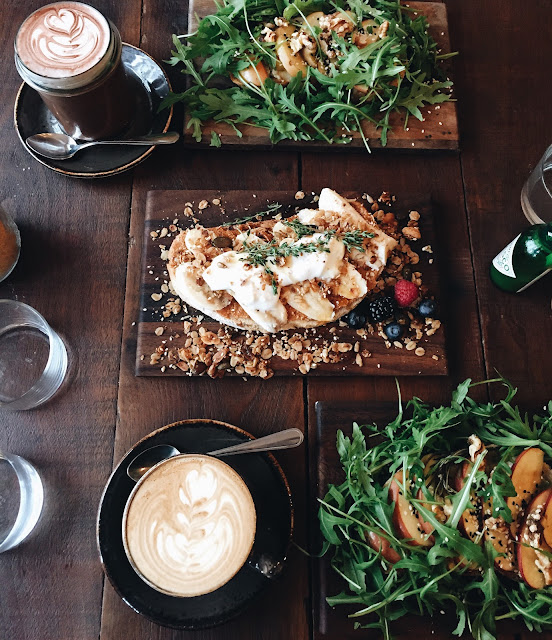 I couldn't resist a return visit to brunch hotspot Roamer's on a recent weekend trip to Berlin. The brunch there on my last trip was simply fantastic- full of unexpected flavour combinations and presented beautifully and thank god Roamer's did not disappoint on those fronts this time either! Yes, of course more people now know of it's greatness meaning that we had to wait a good hour (!) which considering it was a beautiful crisp winter day wasn't too painful but goes way beyond the time I am usually prepared to wait for food, no matter how amazing what is served at the end is (especially as it is in the end of the day 'just' brunch).

Anyway once sat down in this tiny yet wonderfully eclectically decorated space our waiting woes were quickly forgotten. With a mainly vegetarian menu ( with bacon and salmon for those that require it) there was almost too much to pick from. After a good ten minutes of deliberation we settled on a savoury option each, rather boringly going for the same dish of sourdough topped with melted Gorgonzola, apples and rocket as well as a sweet dish to share- in this case a wonderful flavour marriage of sourdough topped with peanut butter, bananas, yogurt, honey and granola. Our eyes lit up as the dishes arrived, clearly a lot of care and attention given to every plate that leaves the tiny kitchen in the back of the cafe with flavours to back it up. It was fresh, tasty and had a genuinely wholesome feel that made us leave slightly stuffed but fully satisfied. Yes, it will be on every "to try" Berlin list and was pretty much filled with only Americans, Brits and Australians of varying hipster degree but despite it's undeniable coolness this place still serves a pretty damn fine brunch that is (kinda) worth waiting for... 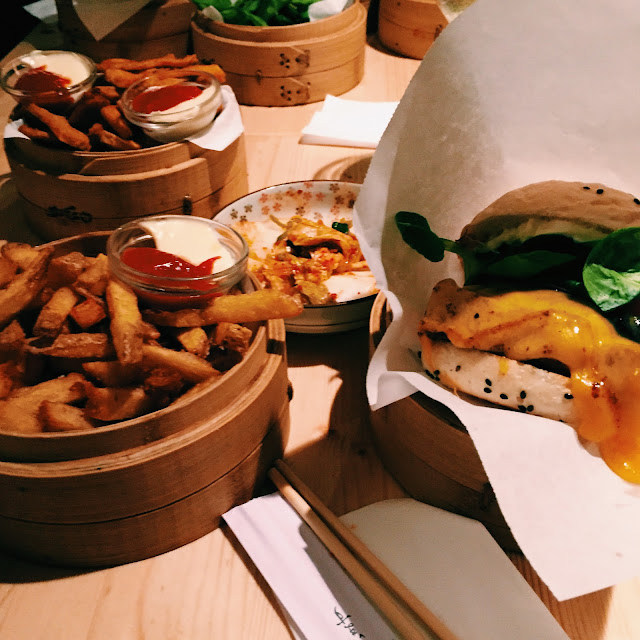 Shiso Burger was the other must try place for food on my Berlin list this time, after several of my friends sang it's praises and called it the best burger joint in town. Now if there is one thing we don't have a shortage of in London it's burger bars but Shiso got me interested with its Asian twist on this classic fast food dish. Browsing the menu beforehand, their selection of fish burgers ( salmon, tuna and prawn) and more than one veggie burger option got me rather excited, usually banished to picking the one none meat option at most burger places and saw me squeezing in a last minute visit en route to the airport on our last day to see what all the fuss is about. And boy was it good. Undoubtedly in fact one of the best burgers I've ever had. In the end I went for the Ebi prawn burger, a huge juicy tiger prawn lightly battered and served with chili mayo and honey-ginger mustard sauce. This was a pescatarian's heaven and hands down a must try if you go. That is not to say I wouldn't  have happily tried any of the other none meat burgers, each one sounding absolutely delicious and completely unique.

Sides were equally good, crunchy sweet potato and normal potato fries (we had to get both) with not an inch of greasiness, served with that classic German mayo and ketchup dip combo, and in a nod to their Asian inspiration a side of crunchy and spicy Kimchi adding a refreshing punchiness. With the most expensive burger around the six euro mark Shiso easily gives some of London's best burger joints a run for their money and offers a creative and new take on junk food classics that makes me wish they had an outpost a little closer than Berlin to me! 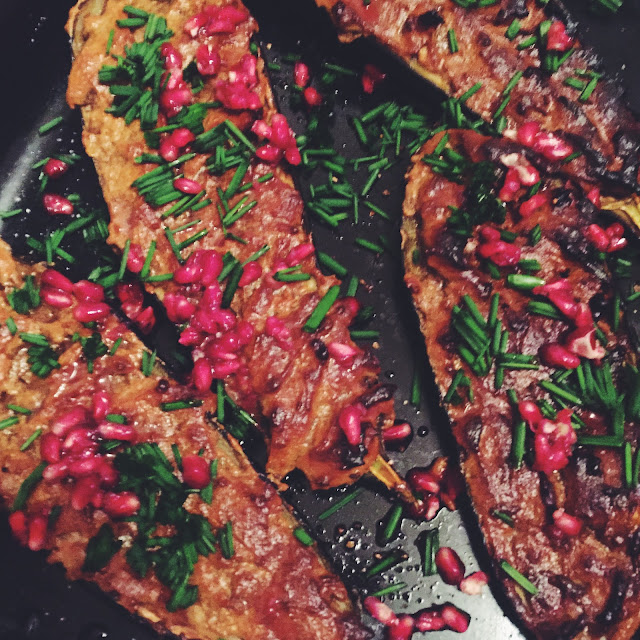 As everyone knows from numerous reviews and mentions on here I bloody love Honey & Co, one of my top 5 restaurants in London and a place that dishes up some of the most amazing Middle Eastern cuisine you'll ever find! They now also have a cookbook out as well as weekly column in the Financial Times where I found this gem of a recipe. I did in fact sample this exact dish in the restaurant and fell in love, it in fact being the best aubergine I had ever sampled. A little apprehensive that I could recreate this amazingness at home I nonetheless wanted to give it a go and once some of the more obscure ingredients where found, date molasses not something I had in my kitchen cupboard, it was actually surprisingly easy to prep and even better it tasted as good as the one enjoyed at the restaurant! Even if you don't usually like aubergine this will blow your mind. Go and make it now! 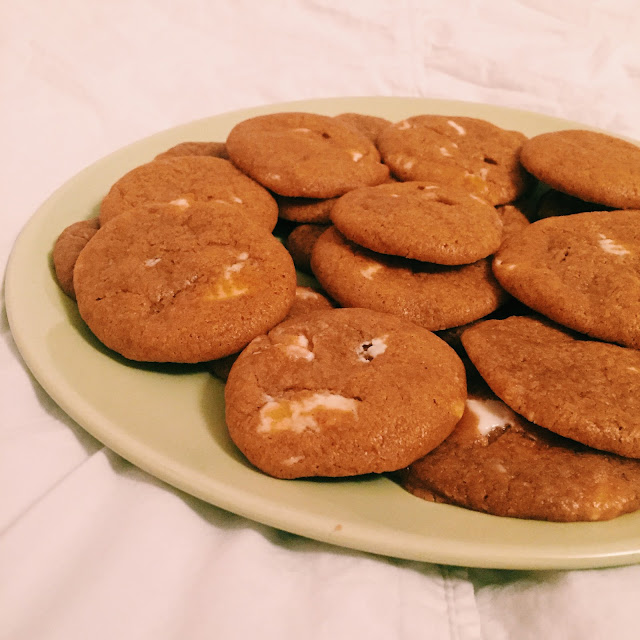 I cannot resist a Reese's peanut butter cup ( I mean who can?!) and even less so when it's a white chocolate one. They aren't easy to find ( I spotted a bag of these miniature white choc ones in the duty free lounge at Berlin Schönefeldt airport out of all places) but the marriage of sweet and creamy white chocolate and salty peanut butter in each cup make them worth the hunt! Having acquired a rather larger bag and with a love of cookies I wanted to test my hand at using the cups to make some cookies. I did a lot of recipe research and in the end adapted the below recipe, originally for macademia nut and white choc cookies (which I want to make soon too!). It was super easy to make and the result was simply amazing- gooey, sweet and a little salty for that wow factor. Fresh out of the oven or shared with my office the day later these were heavenly...plus for those that have no patience the cookie dough was almost better than the finished product. Cookies don't get much better.

Hoping to visit Berlin at some point so will deffo keep your faves in mind!

If you love PvP style games, then you will surely spend hours of fun playing this game!
strike force heroes 4

I hope you may fall in love with Berlin.
manchester airport parking deals