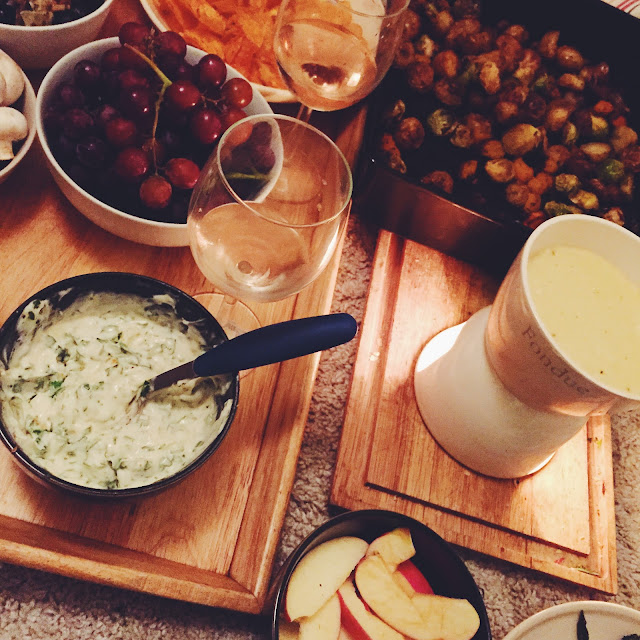 Christmas meals tend to be pretty meat heavy so when it came to deciding on a festive flat dinner for me and my also none meat eating flatmate we had to think a little outside the box, eventually deciding on the best (well in my opinion even better) alternative to it...cheese! Of course even more superior, we concluded, in a melted fondue form.

Combining camembert and gruyere ( Nigella recipe I used for your pleasure here) with wine, another flat favourite, this sounded as close to dinner heaven as one could get and oh boy it was. After purchasing a rather cute fondue set on Amazon for under a tenner, we began thinking of ideal dipping vehicles, something a little different from your boring bread option (a no for my gluten sensitive belly anyway) and cut up carrot crudités . In the end we compiled quite the spread. Apple slices and grapes for that lovely sweet and salty sensation when dunking them into the cheese, rosemary and garlic sweet potatoes, brussel sprouts and baby new potatoes, roasted just long enough in the oven for crispy, slightly charred edges, and griddled tender stem broccoli and asparagus- this was veg and fruit heaven when combined with the cheese.

We also got some lovely deli olives, cheese straws, because the answer to cheese is of course more cheese, and my current obsession when it comes to crisps, Tesco Finest Goats cheese and sweet chilli crisps, providing the perfect crunchy texture break. I also mixed up a lovely garlic mayo, mayo with chopped up parsley, a few cloves of garlic, lemon and plenty of season to finish off this unconventional tapas style dinner. This is the perfect food to have whilst sipping on a cold glass of rose and catching up with your nearest and dearest, it's nibbling at it's best, allowing you to get a taste of lots of different flavours without having to commit to one hefty main course and is exactly my kind of food. Though we both had some rather bizarre cheese dreams that night I can't wait to have another fondue night and have already started to think of what other lovely things we can be dipping into that gooey delicious mix next time round!

The best ice cream EVER 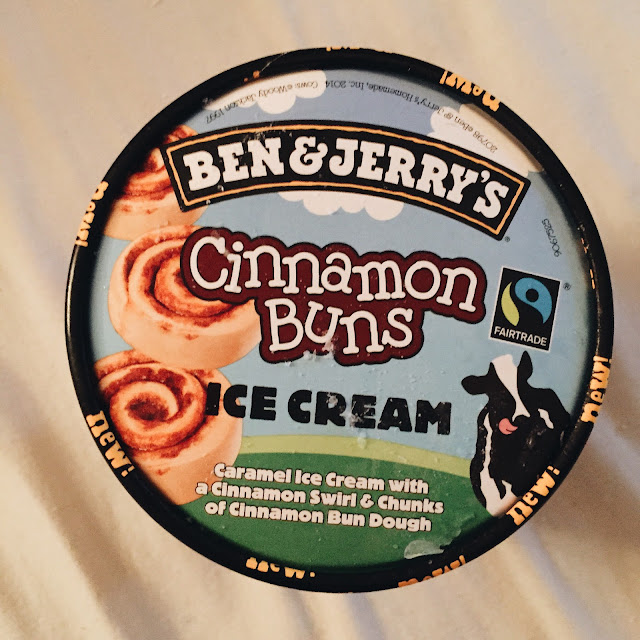 Now as everyone that knows me even in the slightest will have realised I bloody love ice cream, in fact I have previously dedicated an entire post to my favourite flavours ranked from best to worst (read it here), and have always been pretty annoyed about the lack of flavours available from the likes of Haagen Dasz and Ben & Jerry's in the UK compared to the US where a new one seems to come out nearly every month. Well things seem to slowly be improving with this beauty, a long running US flavour, finally hitting our supermarket freezers, my tub found in my local big Sainsbury's.

Now I am big fan of cinnamon in all forms anyway and as result had high expectations for this flavour from the onset but OH MY GOD it is even better than anything I could have ever dreamt of. It's like making the milk at the bottom of your bowl of Cinnamon Toast Crunch cereal into a smooth ice cream then mixing it with tiny iced cinnamon buns that taste pretty darn close to a Cinnabon one, which for whoever hasn't had the pleasure of tasting one is probably the most heart attack inducing/great cinnamon roll in existence with cult status after being featured in the most brilliant opening scene of Breaking Bad spin off Better Call Saul and is only available at 4 rather bizarrely located outlets in the UK, finished off with the most luxury swirl of pure cinnamon sauce goodness. Every spoonful of this is a 10/10 for me and I have been through too many tubs since it's release than I'd like to admit. Sorry Pralines & Cream you've lost your number one spot. Go and buy it now, thank me later. 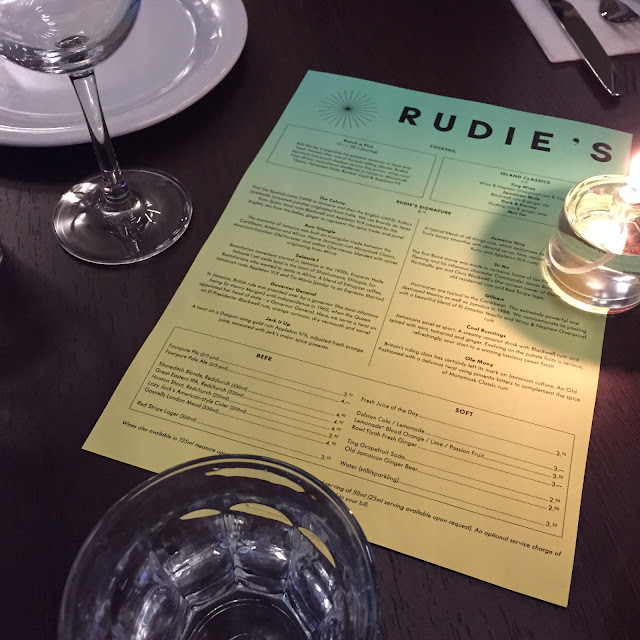 Rudie's in Dalston hosted my work Christmas dinner with the Coffin On Cake crew which may explain the lack of pictorial evidence of the rather fantastic Caribbean food I sampled here, a couple of expertly mixed Mai Tai's and bottles wine later food more eagerly consumed than well photographed first.

That is not to say that the food was merely a drink accompaniment. The sharing menu we had was absolutely fantastic and offered a modern and fresh take on this cuisine. With juicy king prawns in chili broth, jerk calamari and plantain chips to start and a huge jerk meat platter (with tasty jerk veg as alternative for me that featured a delicious take on Ocra) as main, served with a fresh mango and avocado salad as well as classic rice and peas, this was vibrant soul food bursting with flavour, coming in portion sizes that left us more than stuffed and with doggie bags to take home. There was a dessert of rum cake but knowing that we were hitting the dance floor after, I declined, saving a taste of it for my next visit.

That's the thing with Rudie's, this sharing menu gave me a first glimpse of it's brilliance and I already cannot wait to go back and order a la carte, perhaps this time managing to take a snap or two. Service was also flawless with the staff making sure our group of 11 always had enough to drink and with food coming at a steady but not overwhelming pace. Rudie's is a real addition to East London's dining scene and will brighten up any gloomy London day with it's true sunshine food that comes with a modern twist. 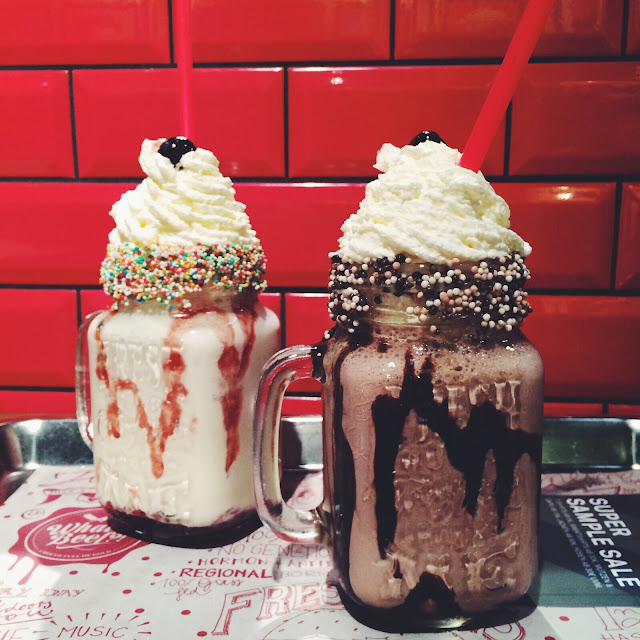 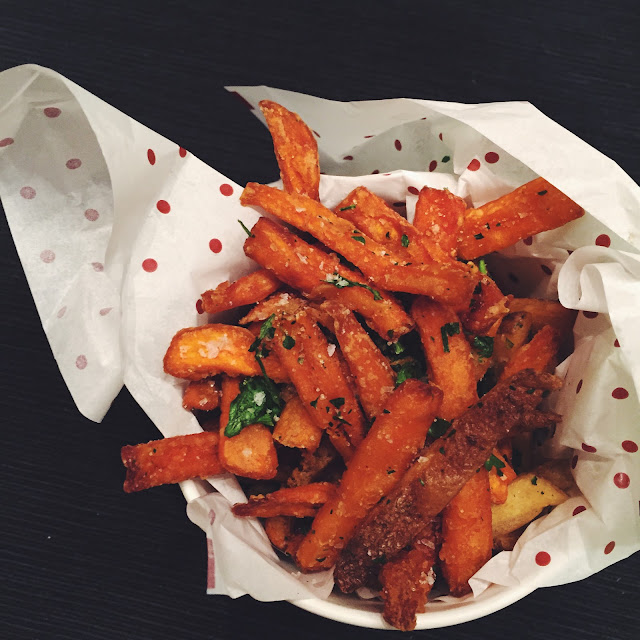 Last but not least a new food discovery in my German hometown of Düsseldorf that is worth shouting about and definitely one to try if you ever find yourself there. I know, I know, in London we've been on that burger hype for what feels like the last 5 years but What's Beef adds a little German twist (mainly great quality ingredients and strong seasoning) to their dishes that see What's Beef comfortably holding it's own even when compared with it's iconic and longer established London counterparts Meat Liquor, Honest Burgers, Lucky Chip and the like.

I didn't sample any burgers on my two visits there but what I did have was absolutely fantastic. The sweet potato fries were without a doubt the best ones of my life (and heck I have been on a mission to create decent ones unsuccessfully following a number of different recipes at home for a while now), crispy, salty and with a delicious sprinkle of parsley. Served with garlic aioli, I have been dreaming of these ever since I've been back in London and if it was in any way feasible would get my mum to send me some over asap.

I also sampled one of their infamous milshakes, so instagrammable it almost hurts. And to be fair they didn't only look pretty but the Vanilla one I chose and the chocolate one my friend went for were pretty damn good.  Yes, it's only a bloody milkshake in the end of the day but a lot of thought has clearly gone into the presentation here ( I particularly loved the sprinkles on the glass rim) and the result whilst a little trashy is fun food at it's sugary best. It may have taken Dusseldorf a little longer to get it's very own culty burger joint but they have a pretty good contender with What's Beef and it will be one of the first stops on my next visit over if only for those fantastic sweet potato fries.
Posted by Stella's wardrobe at 17:22

I just ate and no I'm hungry again.Vegetarian Courtesy ♥ CheesePapas

Things are beautiful when you want to want like awesome.
please Visit
http://www.moviedaybusiness.com/

This is a great article. It gave me a lot of useful information. thank you very much.
Run 3 | Stick Run 2 |friv4school | girls go games

Target store items discount coupons
Save a lot of your money

The article that you wrote a very nice, easy to see and very useful, we are waiting for further information, thank you very much
Motorwars2.com
bulletforce.org