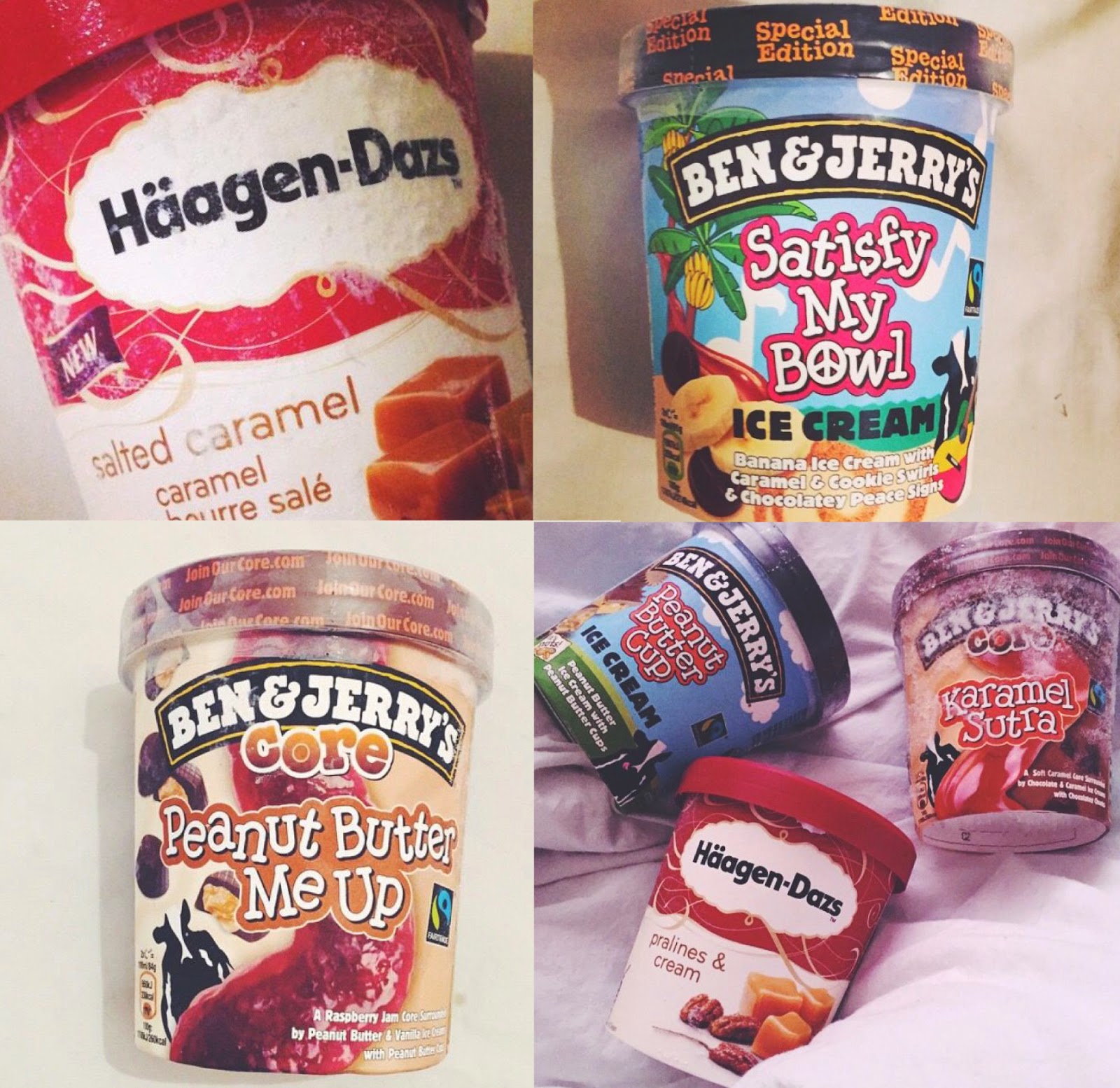 I love ice cream. It is probably my favourite food group were it to be a one nutritionist would acknowledge as an legitimately existing one ( which they should as it makes you happy when you are sad, heartbroken, ill or just in need of something sweet) and as such have tried a fair amount of flavours on hungover Saturdays when it serves as the perfect accompaniment for my weekly film marathons. Of course ice cream is one of those comfort food where we like to play it pretty safe - the worst you can do is commit to a pint, which isn't that cheap to start with - some of my corner shops clearly exploiting the desperation of ice cream fans with prices south of the five pound, and after one spoon realise in disappointment that it isn't quite the flavour experience expected, leading to grumpily returning it to the back of the freezer to stay there to be either eaten by a less picky flatmate or forever stay next to a bag of frozen peas.

Well I am here to help with my review of the best,  perfectly fine and more avoidable ice cream flavours that  I have tried in my time. As disclaimer I am not a fan of chocolate ice cream so don't expect a review of some double chocolate brownie, chocolate chunk concoction and personally I think frozen yogurt based ice cream is best served fresh from somewhere like Yog where it's creamy and you have a choice of toppings rather than bought from a supermarket. I have never had a good own brand ice cream flavour no matter if Tesco, Waitrose or Sainsbuyrs ( though a Waitrose white chocolate and raspberry variety was commendable if bland after a while) and Cart'dor has always been too full of air rather than flavour for me. So below are the flavours I have tried and would most likely eat again, some more happily and regularly than others and I hope they will tickle your ice cream tastes buds to try something new because we all know no one is more boring than the guy that only orders vanilla! What are your favourites? Any that I have missed out and got to try? 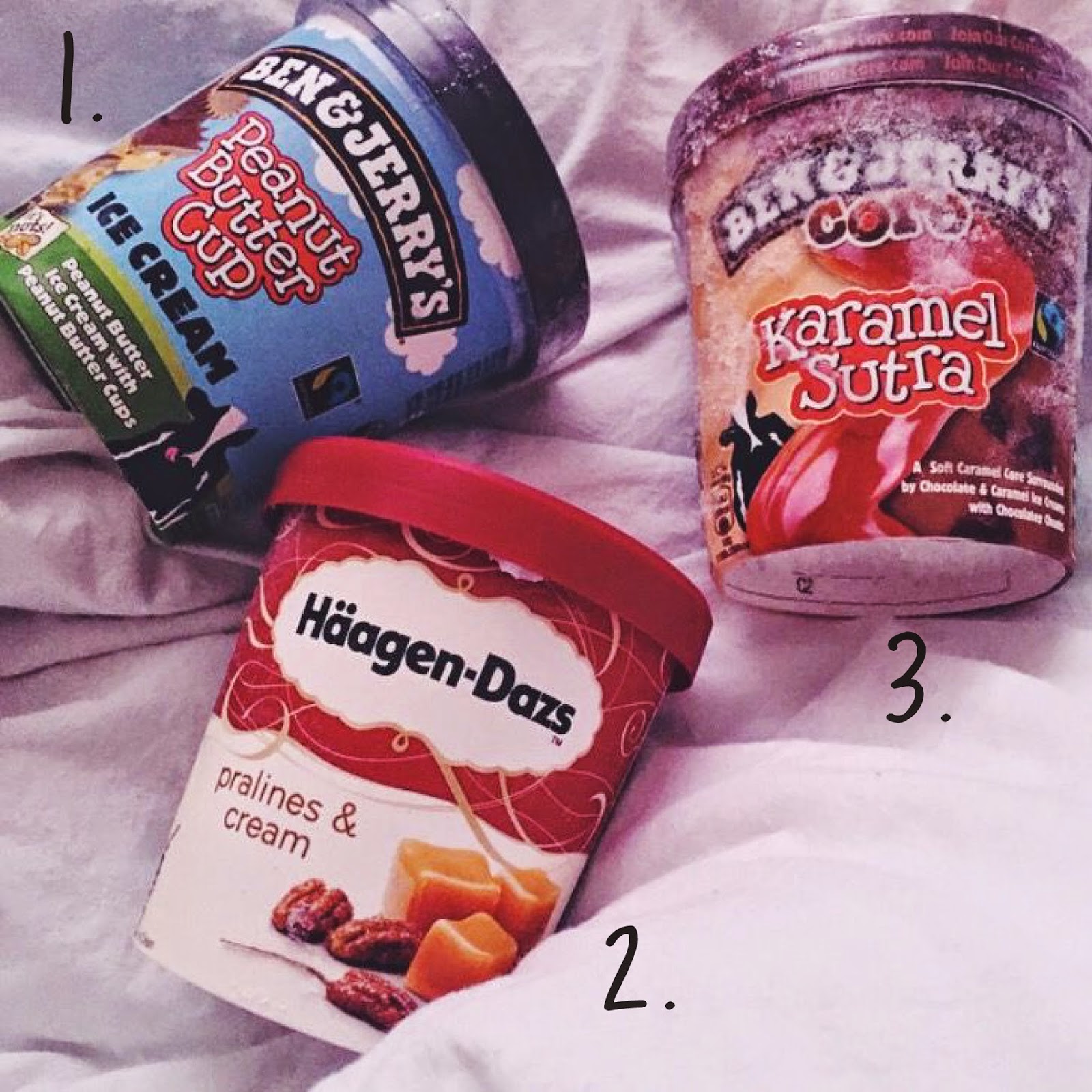 1. Ben & Jerry's Peanut Butter Cup
I absolutely love Reese's peanut butter cups to the extent that my crazy aunt from America sends me a massive care package with just about every imaginable Reese's variety once a year ( my favourites being any white chocolate variety and the mini dark chocolate cups) which was why I had very high hopes when I first spotted this flavour. However while I love the big chunks of actual peanut cup, and they are literally whole cup sized, the peanut butter ice cream surrounding the cups wasn't quite up to scratch, becoming too bland and almost too savoury after a while. I much prefer the flavour balance of Peanut Butter Me Up ( reviewed below) and overall would only give it a C!
Overall Verdict: C

2. Haagen Dazs Pralines & Cream
Though one of the most old school flavours, this remains my unrivalled number one ice cream flavour. Why? It has the perfect mix of classic, creamy vanilla ice cream, gooey caramel and sweet nutty praline pecans. It's not too sweet, not too sickly and one of those ice creams where you can more than easily finnish the pint in one sitting. For me a hundred percent A+!
Overall Verdict: A+

3. Ben & Jerry's Karamel Sutra
Karamel Sutra definitely isn't the lightest of flavours but nonetheless one I greatly enjoyed, even more surprisingly so as it features chocolate ice cream which I usually avoid. With a superb liquid caramel core surrounded by caramel and dark chocolate ice cream it can become a little sickly after a while but I really enjoyed how the dark chocolate balanced out the caramel elements with all three working incredibly well together. It is an ice cream to enjoy a few spoons full rather than the whole tub but I would definitely recommend it and give it a B+
Overall Verdict: B+ 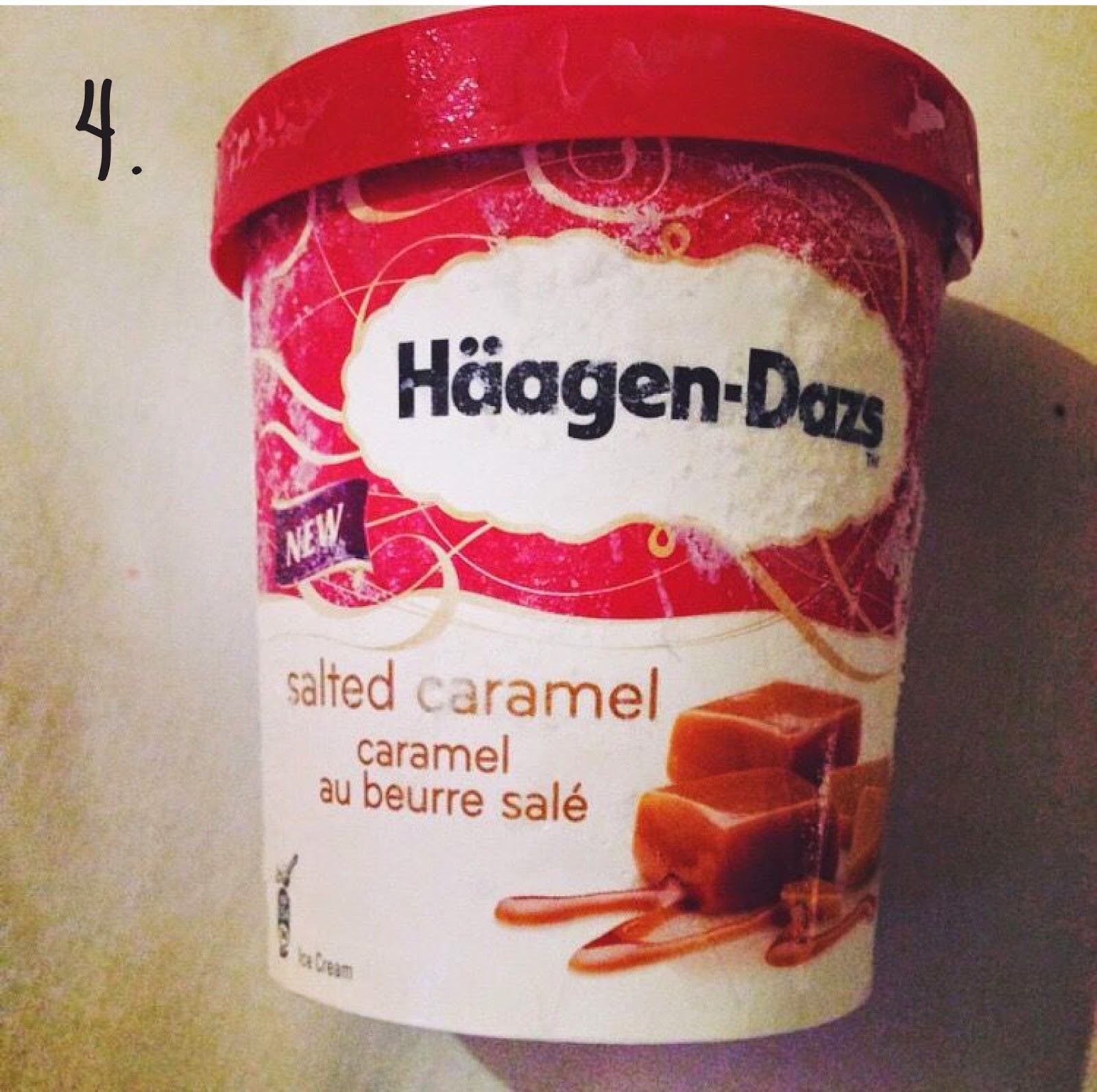 4. Haagen Dazs Salted Caramel
A relatively new flavour in the freezer isle, I was super excited to see this especially being a massive fan of anything salted caramel and boy it didn't disappoint! A buttery caramel ice cream is speckled with nuggets of salted caramel and finished with a gooey liquid caramel swirl. Let it melt a little bit for extra creaminess and you'll struggle to put it down as it goes down WAY to easily. It's only minor let down and why it hasn't quite taken over Pralines & Cream as my favourite flavour is that it lacks a little bit of texture for me ( the so to speak 'praline element) though that is more personal preference and doesn't affect my overall verdict of straight A!
Overall Verdict : A 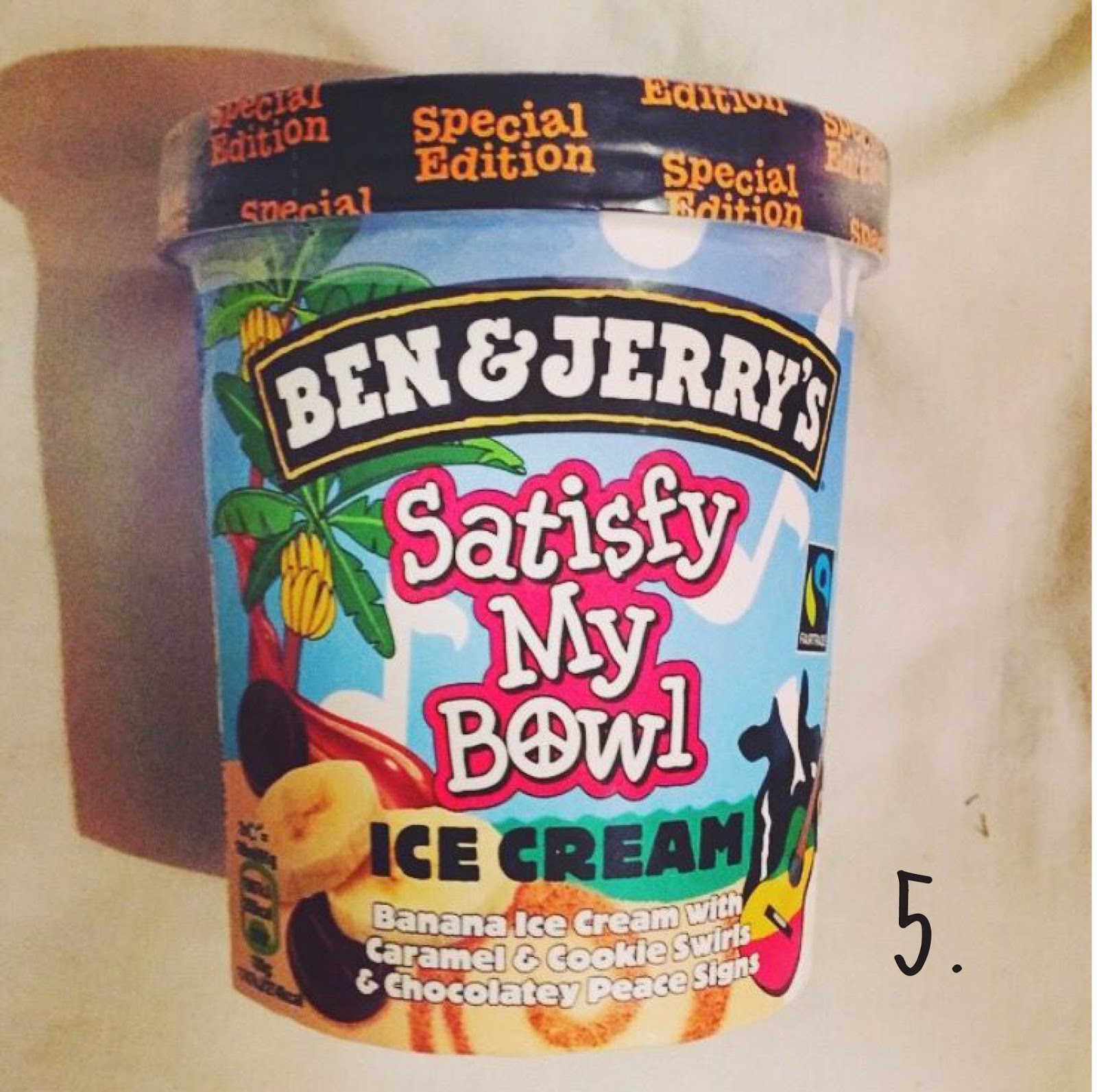 5. Ben & Jerry's Satisfy My Bowl
This is a special limited edition Ben & Jerry's flavour to commemorate the thirty year anniversary of Bob Marley's "Legend" compilation album and one that I would highly recommend trying if you can find it while it is still out. I was more than sceptical whether I was going to enjoy this. I am neither a massive banana or cookie dough fan and with the ice cream base being banana and a cooking swirl going through the whole tub things weren't looking too promising. However this flavour is all about just the right combination and with the added element of caramel swirl and dark chocolate peace signs the result was absolutely delicious. The banana isn't overwhelming but rather adds a fruity freshness that balances out the sweetness of the cookie dough and caramel and made this ice cream hugely enjoyable! I'll be sad to see this one go and give it a B+
Overall Verdict: B+ 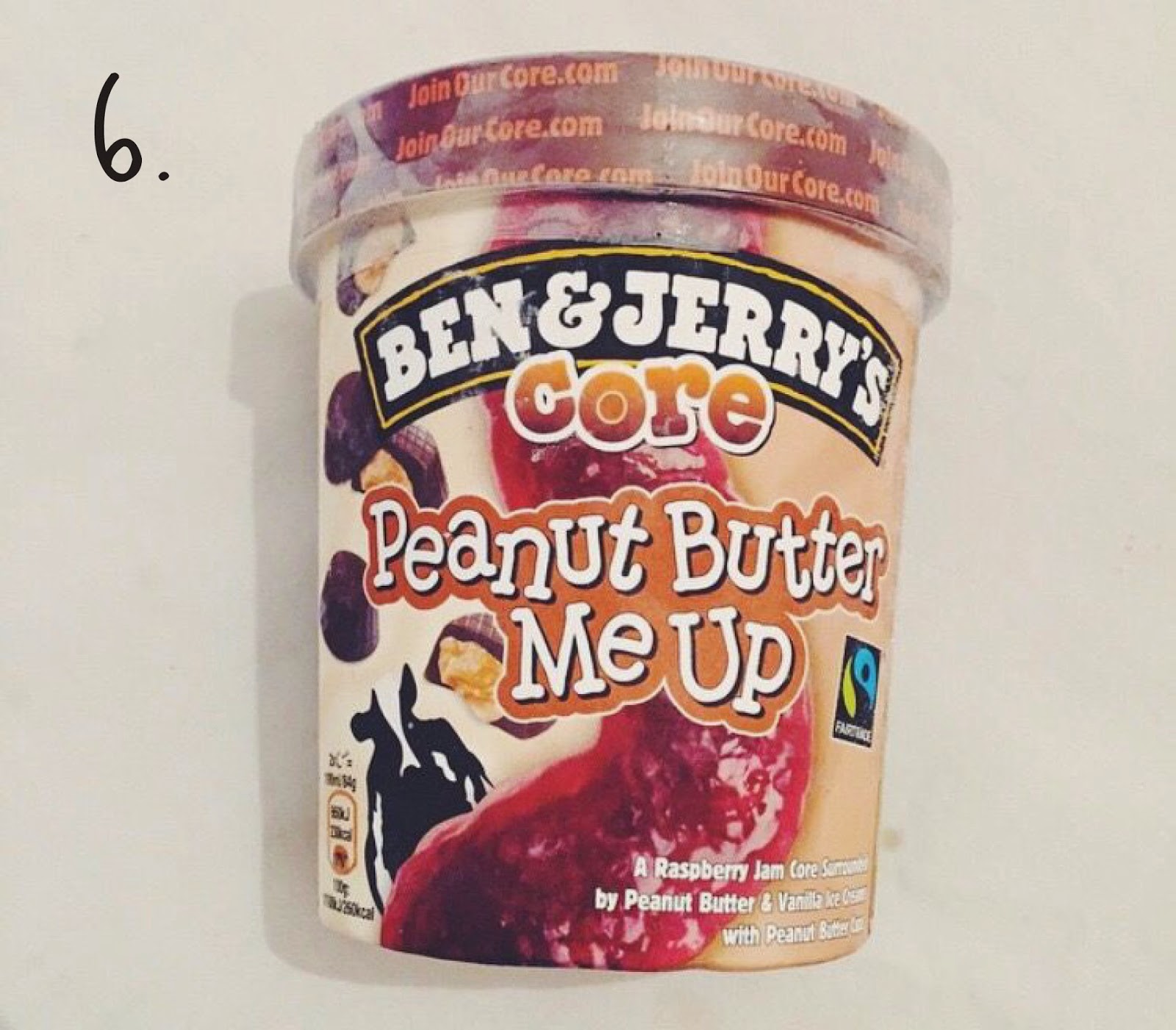 6. Ben & Jerry's Peanut Butter Me Up
I check literally every corner shop I ever enter for this ice cream, it being far too difficult to find in normal supermarkets considering how BRILLIANT this flavour is. Yes, the raspberry jam core sounds a little odd to start with ( based on the American's beloved peanut butter and jelly sandwich) but  once you open the tub you realise that rather than jam a deliciously tart berry coolie is surrounded by peanut butter ice cream and vanilla ice cream speckled with tiny peanut butter cup. Where the Peanut Butter Cup variety becomes a little bland after while here all three elements make sure that the peanut butter really shines, the vanilla and fruit really working a treat with the peanut cups and ice cream. It's one of my absolute favourite flavours and worth keeping an eye out for, deserving without a doubt an A+
Overall Verdict: A+ 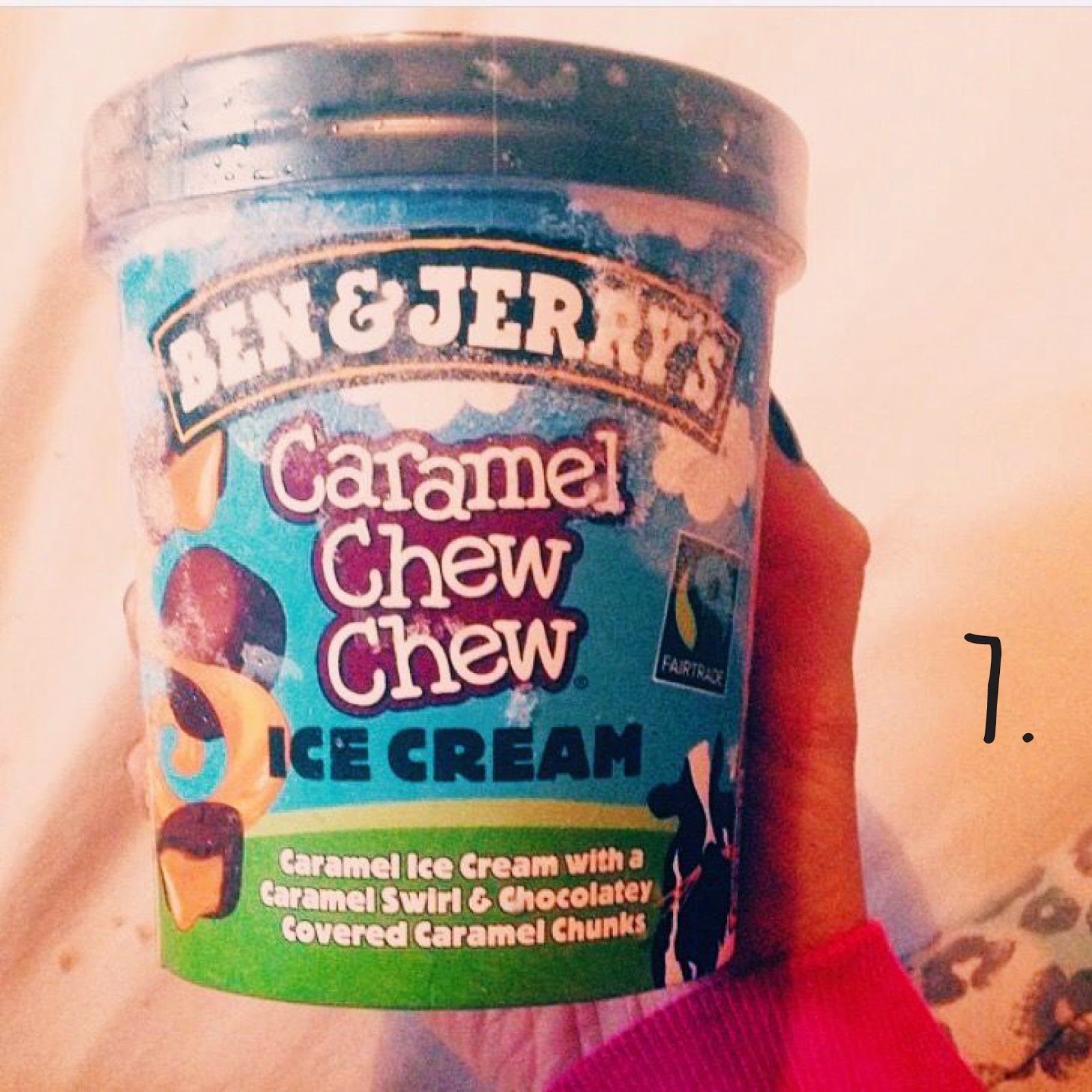 7. Ben & Jerry's Caramel Chew Chew
Lastly probably the most disappointing Ben & Jerry's flavour I have sampled. The caramel ice cream is very weak in flavour, the caramel chunks covered in chocolate bland and not gooey enough. It seems a little bit of a half hearted flavour especially for someone like me that loves caramel. Not worth trying I give it a D.
Overall Verdict: D

i love ice cream. great reviews. whenever i find myself yearning some, i go out to discover something new. u cnt go wrong with banana for me though

Now before you start judging me,lemme just go on record to say I love sex.and I mean I looooove sex.And when I start liking a guy,sex is one way I show it.That's just how it is.

Well,I spent the night at his place.There was a lot of touching and kissing.Everything was going well and the prospect of mind-blowing sex seemed imminent.

That was before I reached into his boxers.
Let me just go on record(again) and say,it took me awhile to......"find him"
When I eventually..... "found him", I wasn't sure what I was holding.
"where's the rest of it?" I remember thinking to myself.

I bought my favorite bag at https://www.justfor5pounds.com Super stylish!