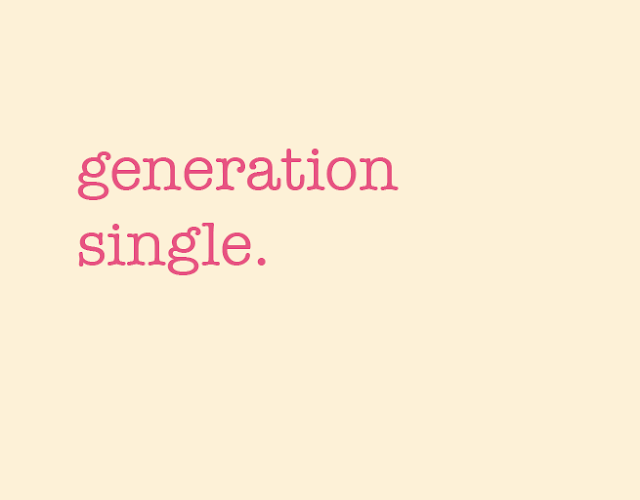 There is a worrying trend that I have been observing in our capital, a trend that is not rooted in fashion at all. Indeed London is filled with a whole generation of people in their mid to late twenties, highly educated, the tastemakers of today in fact and with that well schooled in the latest joint to eat their bespoke burgers at, the best rooftop to sip Negronis on whilst overlooking the city and the ‘as of yet not infiltrated by Essex’ clubs to party the night away on a Friday night. They are highly career driven, ambitious and satisfied only with the best in their lives. However most of these people, on paper unarguably great potential boyfriends and girlfriends, are single.  Out of my whole friendship group for example only one girl is in a happy long term relationship with a considerably older man that perhaps was lucky enough to forgo this generation’s problem. What has emerged instead and what I have also been unable to escape is a continuous vicious dating cycle of going out at weekends, drinking away our social anxieties and then getting with a generically well presented boy or girl, ticking the boxes of our mentally asserted type (mine tends to be bearded and with brown hair), sometimes resulting in subsequent dates and sometimes not but ultimately not working out  because of commitment issues, differing expectations, clashing schedules or at times legitimate insanity of one or more parties involved. At the end of this cycle almost always awaits an at least temporary existentialist crisis, questioning ones chance of ever finding a suitable partner and creating future scenarios of owning cats to fill the emotional hole left behind or considering the scary move towards online dating. Usually this phase is rather brief and filled with a mix of enthusiasm and anxiety that will only ever eventually restart the same process all over again until the next dating letdown, after all no one wants to be a failure or social recluse these days. But how has it come to this? Clearly no one has stopped looking for that one partner as the incredible rise of the aforementioned online dating world has shown.

Of course there is the element of abundance of choice, London offers the hedonistic lifestyle of little commitment and a lot of fun. Everything is instant and doesn’t last long, a pop up mentality that extends from weekend activities to friendships and relationships in general. Why make something work when we seem to be on a constant look out for the next upgrade. It is this very 21st century syndrome of trying to find a perfect match that for me lies at the core of this generation single. It’s no longer simply about looks and personality or god forbid simple chemistry, no, its about obscure considerations such as university degree ( red brick?  Ex-Polytech?), future aims (what area in London to eventually buy in and how many bedrooms), wage and dress sense. In today’s world if we want to find a limited edition, exclusive and sold out bag or dress we can find it on ebay, if we want to eat the best Italian food in town we will, without batting an eyelash, wait 2 hours in a queue- to cut it short we have gotten so used to getting exactly what we want when we want it that we are willing to abandon anything and in this case particularly human beings with their flaws and peculiarities that doesn’t fit this, prepared to go on a seemingly never ending search  rather than making a slight compromise.

Even online dating goes on the assumption of match making people together based on endless surveys and personality classification rather than the things that ultimately make a long-term relationship work. Indeed the great romances in history were not based on total compatibility; they were based on compromise and a genuine connection that is not forged through common interests on Linkdin. The opportunities that our times have given us in terms of our working and medial life may be great but some of the simplicity of days gone by when it comes to finding love may have to be rediscovered if we don’t want to end up forcibly settling when middle age panic sets in, having perhaps rejected that one a great love for retrospectively minor reasons. Will I give up looking? Of course not but I will try and scale back the high expectations and sense of competition that inevitably emerge with living in London when it comes to meeting potential dates. As one of my favourite German sayings goes ‘every saucepan has its lid’ and that lid may not be the perfect fit but it is one that ultimately with sacrifice and a little work on both sides can give a lot more satisfaction than dating someone that is a carbon copy of ourselves and our ideals and may help us stop acting like emotionally volatile teenagers even when way into our twenties and thirties.
Posted by Stella's wardrobe at 14:01

Really great point of view, I think you find the perfect words to describe it.

Wow Stella - I know it's your ambition is to be a stylist but you're also very skilled in writing so I could totally imagine you becoming a stylist with a column.
I've been single for far too many years and also match your description of "highly career driven, ambitious and satisfied only with the best in their lives." I didn't realise there were so many of us (must be more common in London) so it makes me feel a bit better about my rubbish love life! x

Thank you for sharing information on your website, blogging greetings
Obat Hemoroid