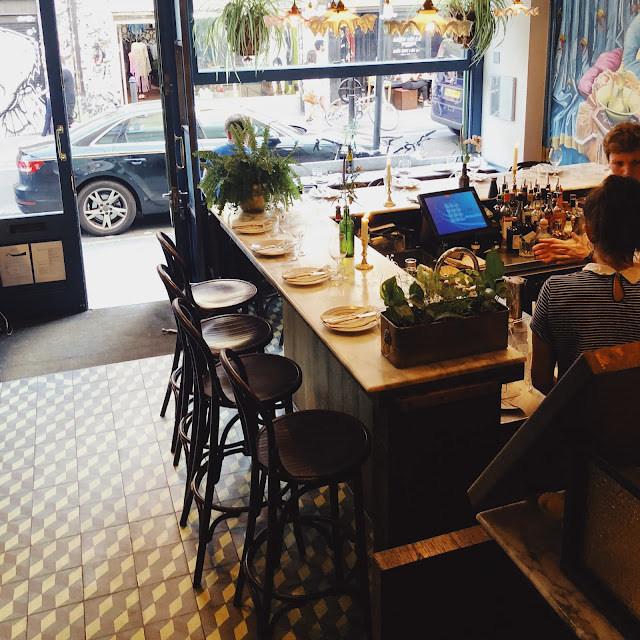 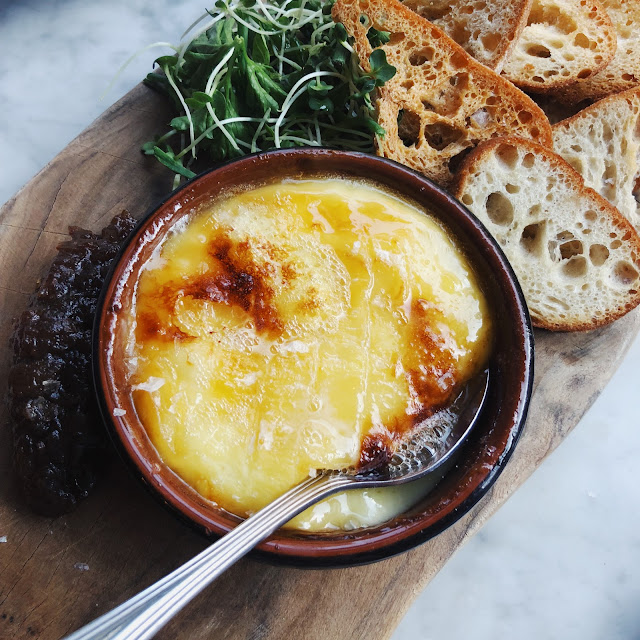 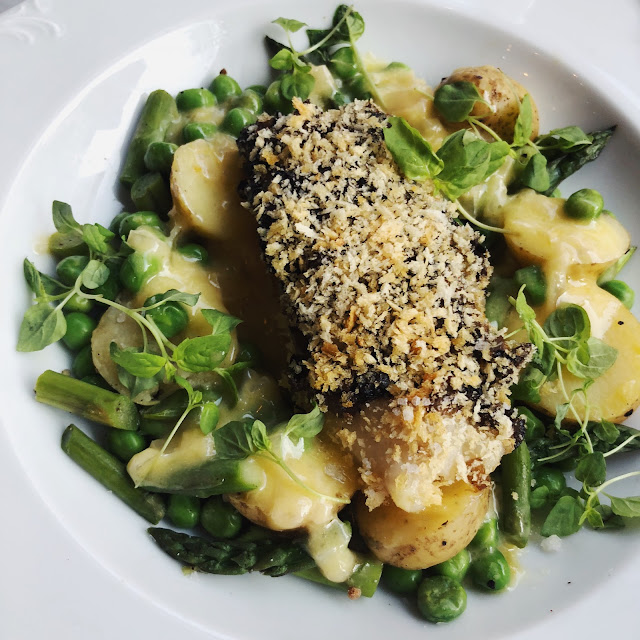 I had been wanting to try the French small plates at Blanchette East, located bang in the middle of Brick Lane, for a while now, yet never quite managed to eat there (in fact the last time I tried they were shut for their very belated Christmas do). The wait was definitely worth it here though as the dinner me and my friend had on a hot Sunday evening there was without a doubt one of the best I’ve had in London for quite a while.

The restaurant space has a very Parisian bistro vibe about it and we were able to perch on some high stools at the front of the restaurant, which had been opened up, windows and all, so that it felt like we were dining al fresco, also offering us some rather entertaining people watching on an England match day at the World Cup (a lot of very drunk people swaying down Brick lane).

The menu is divided into a snacks, charcuterie, cheese, meat, fish and vegetable section, with sharing recommended which me and my friend Henry were more than happy to do! To start proceedings we ordered a very reasonably priced and refreshing carafe of white wine, followed by some cheese beignets (a kind of French fritter), served with a tangy onion confit which were a delicious little starter while we perused the menu. So much of it sounded amazing (including a very extensive veggie section) that we found it hard to settle on our final dishes but in the end went for a good mix of vegetarian and fish plates.

My eyes were instantly drawn to the baked St Marcellin cheese with honey and truffle (after all I LOVE all things truffle) and I am happy to report that the almost fondue like melted cheese, served with crisped up bread slices, was utterly out of this world - gooey, truffly and simply stunning. This was followed, the staggered serving of the dishes was also done to perfection here, by a baked fillet of hake with asparagus, jersey royal potatoes and a truffle (yes more) mushroom crust which was another absolute highlight of the meal, not only beautifully present but a perfect marriage of flavours that screamed summer.

After this came the only slight disappointment of the meal, the Moroccan baked eggs with peppers and flat bread, which were perfectly fine but nothing out of this world (I mean they are eggs in tomato sauce at the end of the day) and were also rather small in portion size. To be fair this could generally be said for most of the plates at Blanchette East but for me that can be excused in this case as they do not claim to serve main size dishes and which here meant we got try a lot of different flavours without being absolutely stuffed at the end.

In any case to finish off the savoury part of the meal we lastly ordered their mussels, my first ever ones believe it or not, which came served with smoked tomato, creme fraiche and samphire, so delicious that they left me wondering why I had never tried mussels before and instantly mentally transported us to a sunny spot somewhere in the south of France. The French fries with bernaise sauce ordered on the side, were crispy, fluffy and one of the best I’ve had in London and the bread and butter we greedily ordered to soak up the last mussel juices was quite extraordinary, elevating this humble combo into something of an experience.

Having been so impressed by the food (and it has to be said also impeccable service) thus far it didn’t take a lot convincing to get us to share a dessert and the white chocolate and creme fraiche marquise ( a kind of dark chocolate shell filled with a white chocolate mousse) served with chocolate ice cream and cherries was simply divine and a fitting end to a fantastic meal that showcased fantastic culinary skills at more than ok prices. I have not as good French food in London and even in France before and can only sing the praises of this little east London gem. The perfect place for seasonal sunshine food and even better you can book ahead. A place surely added to my absolute London favourites. 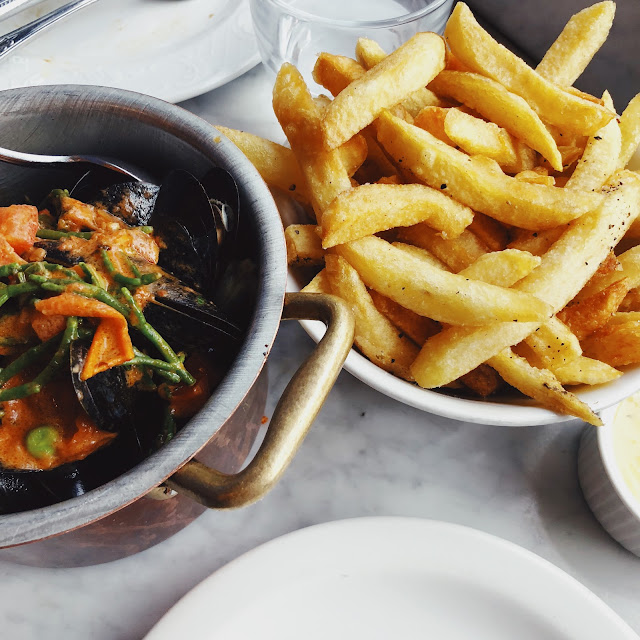 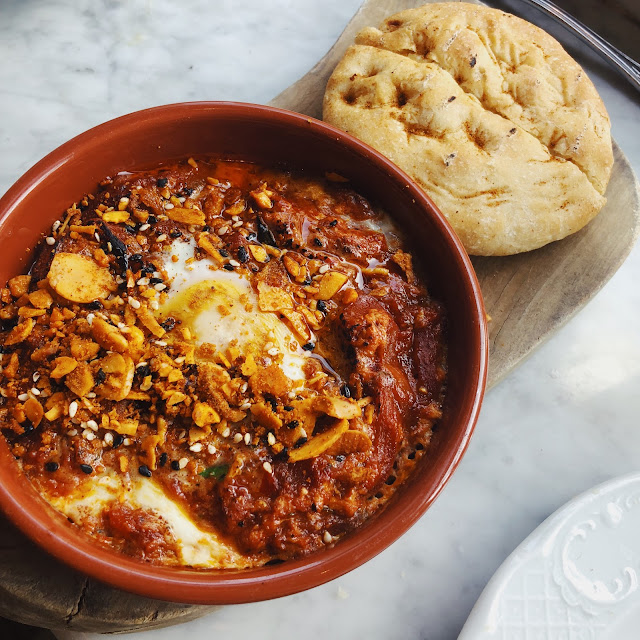 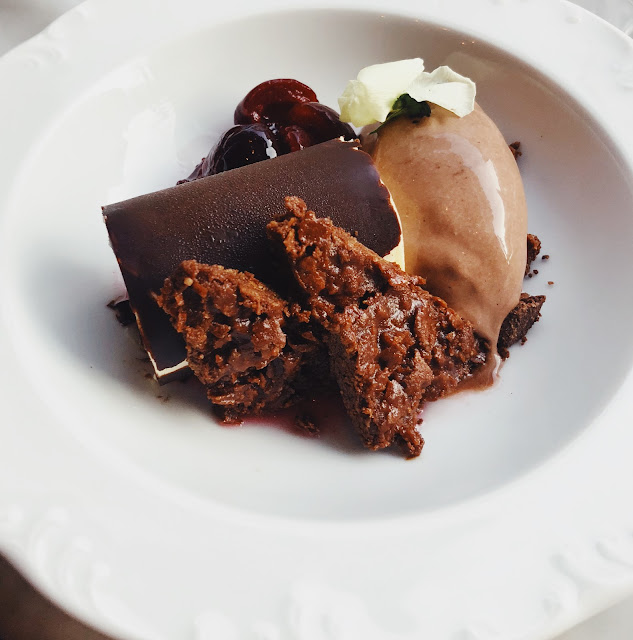