I don't eat at fancy restaurants all the time, in fact due to my regular spending on clothes and other useless stuff it tends to be more for special occasions rather than a regular occurrence. However that doesn't mean I don't make other tasty food discoveries in day to day life that are affordable and sometimes even more delicious, moorish and addictive than the most sophisticated of three course meals! Below a few recent discoveries that I hope you will give a try too to mix things up a little! 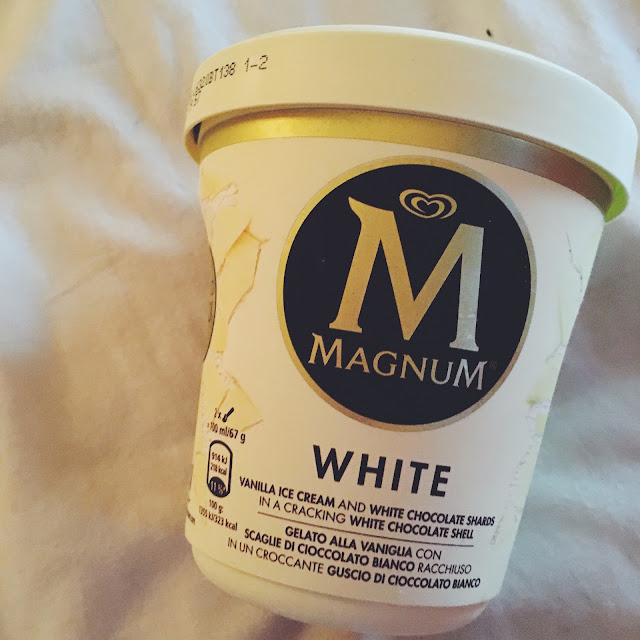 There is no denying that a classic Magnum ice cream on a stick is pretty fantastic anyway, particularly the double caramel and white chocolate kinds, but this little tub of ice cream as spotted in my local Iceland blew just about any competition, including my favourite Ben & Jerry's and Haagen Dasz, completely out of the water. So what exactly makes it so special? Well it's basically a massive, massive magnum- the creamiest vanilla ice cream encased in lots of thick vanilla speckled white chocolate with some more shards of white chocolate mixed in for good measures, all coming together to form an utterly heavenly combination.

On the package you are instructed to crack through the shell after a 10 minute wait to make the most of the ooey gooey mixture though I seldom make it to that point once I get this beauty out of the freezer. It's a dessert you won't want to share and a sweet treat you will buy time and time again. Not only one for white chocolate lovers but a truly fantastic ice cream and welcome addition to the freezer isle! 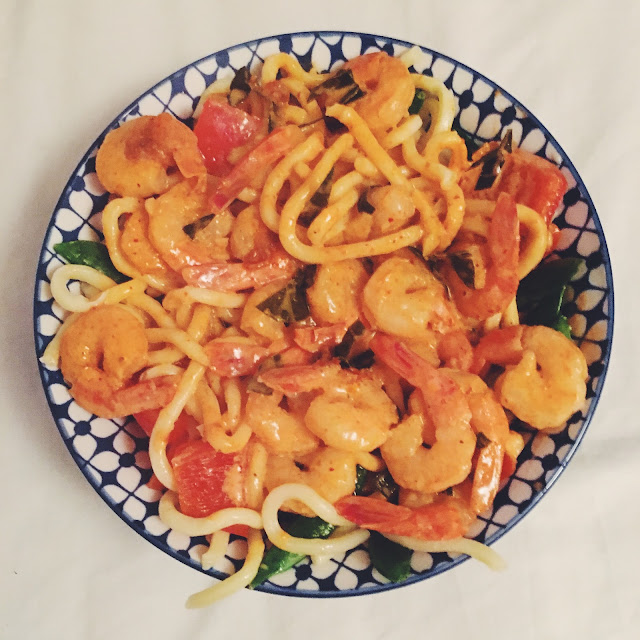 I've recently become somewhat obsessed with Thai food, with red curries quickly replacing pad thai as my ultimate to go to dish. This new found love however hasn't come in cheap with me more often than not caving in and ordering it in from Deliveroo or Ubereats, in the end spending over a tenner for a meal I inhale in ten minutes. That is not to say I won't revert back to this again in the future, heck sometimes even the thought of chopping a single vegetable is too much to handle and only a takeaway will do but what I found most satisfying here is that a dish so full of flavour and, in my mind at least, impossible to recreate properly at home actually turned out to be super easy and cheap to make and bloody delicious at that.

I was lucky enough to stumble across an amazing recipe from my favourite Thai restaurant in London, Rosa's, online (you can watch their brilliant founder Saiphin Moore make the red curry with salmon instead of the prawns that I used here) and also happen to live on the same road as an Asian supermarket which made finding ingredients that are a little more obscure such as lime leaves easier than say only having a Sainsbury's or Tesco at your disposal. However worry not other than this one slightly more exotic component you will find everything else in the Asian section of a run of the mill supermarket. Prep is equally easy with the whole thing done and ready to eat within five minutes and after just one watch of the super easy to follow video.

As you are making it yourself you can of course tweak things slightly to your taste, I for one choosing noodles rather than rice,  with the end result so damn tasty and close to the best Thai curries I have had (most of them indeed from Rosa's) that I couldn't quite belief my cooking achievement which probably only made everything taste even better. So what are you waiting for? In my case at least this curry has been added to my regular cooking repertoire and I can't wait to dish it up to friends that will have no idea just how easy it is to make!

NOVELTY FLAVOURED AMERICAN OREOS THAT WILL BLOW YOUR MIND 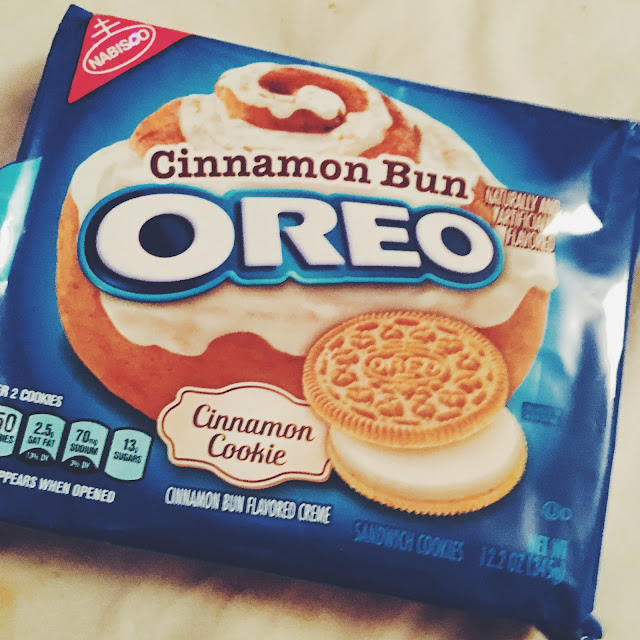 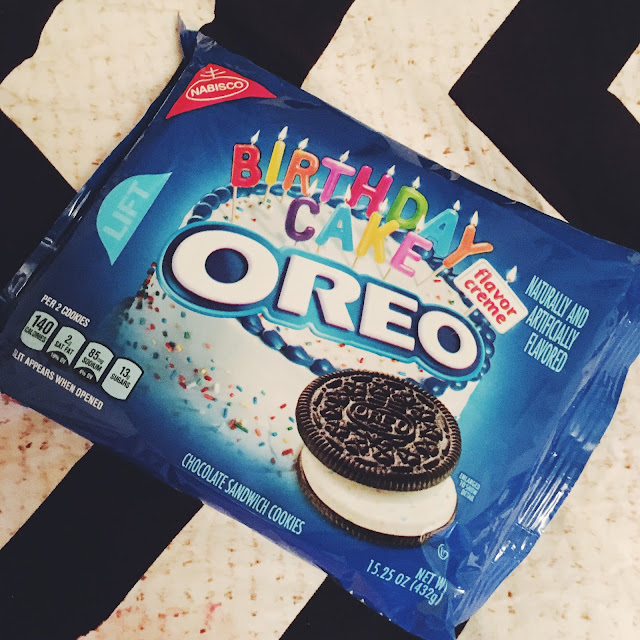 I am a big fan of novelty flavours when it comes to just about anything sweet, one of the highlights of my New York trips tragically their wealth of weird and wonderful Ben & Jerry's flavours (Boston Cream pie anyone?!) and Oreos are no exception. I am not a massive fan of standard Oreos, I mean they are ok but not a biscuit I'd ever scream "Oh I fancy one!"about  but the clever people working there do know how to make an Oreo that tastes like something utterly different and brilliantly so.

Ok, this might be using a few e-numbers but who cares! I want to be able to taste a cinnamon bun in the shape of an Oreo so let me! These special flavours aren't so easy to find in the UK but you can get the Birthday cake variety in the American section of most big Tesco's while I got my hands on the cinnamon bun flavour in Selfridges. I have to say I was a little let down by the cinnamon bun flavour, maybe expecting a little too much for the steep price I paid (don't judge it was £8) but WOW the birthday cake variety is quite something. As weird as it may sound it does actually taste like all the birthday cakes of all your childhood birthdays in a biscuit form and damn they are moorish! Highly recommended not only for novelty but taste as well. I sure will be keeping my eye out for more extraordinary Oreo flavour combos! 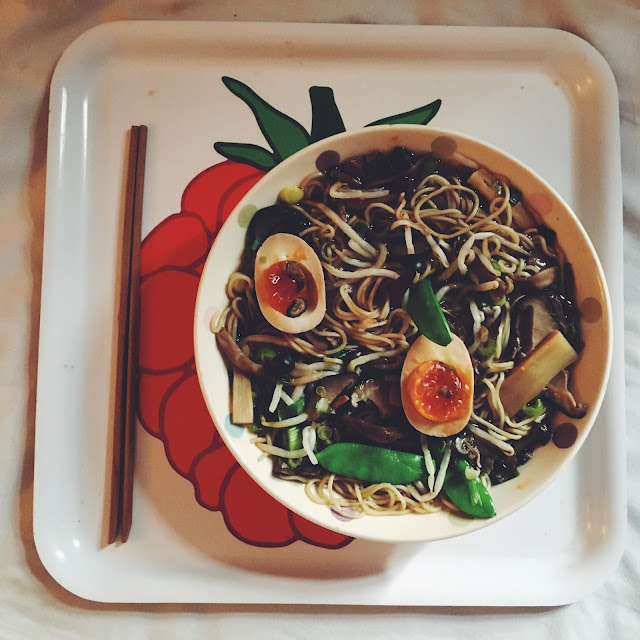 I am quite critical of the ramen scene in London, yes apparently Bone Daddies and the like are decent enough but I grew up in a town with some amazingly authentic Japanese ramen bars (Dusseldorf has a huge expat community that need to eat well!) so have pretty high standards when it comes to this Japanese staple food. However feeling run down and hungover a few weekends ago and flicking through my Ubereats options I thought I'd finally give Tonkotsu East a go. Many of my friends had raved about it before but I don't know with so many exciting dining options near me I had never been quite enticed enough to have a meal out that just involved a bowl of noodle soup.

Starving at home however and in need of some decent grub I thought heck let's give it a go and went for their vegetarian Shimeji, Shiitake & Miso Ramen which entailed Miso-based, konbu and shiitake stock served with shimeji mushrooms, egg noodles, bean sprouts, bamboo shoots and finished off with a delicious half a seasoned, soft-boiled egg. What really won me over here was how everything was delivered with the end product's quality and flavour preserved perfectly. I've had some pretty tragic Ubereats experiences including soggy and cold pizzas, half melted frozen yogurt and rock hard chips. Tonkotsu however has really thought the delivery experience through, delivering you a little ramen kit easily and quickly assembled at home. Indeed in a matter of minutes you can create a beautiful and restaurant presentation worthy bowl of ramen, combining the pot of stock with a container of egg noodles and topping it with all those delicious vegetables and the egg. There is no mish mash of soggy flavours and if things have gotten a little cold just quickly whack it in the microwave for a minute or two. The end result is a legit bowl of ramen full of earthy and aromatic flavours that I can really not complain about. Of course it doesn't beat some of the fantastic versions I've had in crammed noodle bars but it's pretty damn fantastic when you want a relatively healthy takeaway delivered to your house and shows that you don't have to compromise on quality and presentation as restaurant when you offer your food through services like Ubereats and Deliveroo if you find innovative ways to get your food to your diners.

Thanks sir
Its nice article every thing words excellent and get more ideas, Thanks sharing this article have a great article and awesome looking "Stella".
Happy Valentine Day Images 2018