Being intolerant or allergic to anything is never fun and when I found out that my belly and gluten don’t get on overly well I can’t say I was particularly over the moon. I mean we all know gluten is in basically anything that is tasty- pizza, pasta, bread, you name it (thank god my favourite food, ice cream, has remained safe).  Of course I still sometimes resolutely say FUCK IT and eat gluten anyway, suffering from a rather sore tummy for the days to follow, and boy is it worth it when it’s an amazing pizza or you are out to eat somewhere and don’t want to be that person missing out BUT luckily we now live in a time where having a dietary requirement is more catered for than ever before and you don't necessarily have to miss out on the good (gluten) things in life.

One of my favourite discoveries on the hunt for gluten free goodies thus far has undoubtedly been Amy’s Kitchen.  While London’s restaurants scene offers more and more gluten and dairy free as well as vegan options these days, big supermarkets and their selection of ready meals aren’t usually as accommodating which is why I was so shocked and pleasantly surprised that Amy's offers exactly this range of super tasty ready meals that come in gluten free and vegan options in the freezer aisle of most supermarkets!

And they do it well, in fact, originating from America, some of their ready meals, particularly the super cheesy mac n cheese better than their typical Tesco or Sainsbury’s counterparts. Even my friends without intolerances were barely able to notice the slight differences in ingredients, using rice pasta instead of normal pasta and a creamy almond based sauce instead of a dairy version and with super reasonable prices between £2 and £5 a pop they provide a quick, and comforting meal of the sorts I thought I could no longer enjoy.

I’ve tried a few of their meals by now so below my two favourites! Even if you don’t have any intolerance these are super tasty and a great addition to any freezer which have made my life a hell of a lot easier. 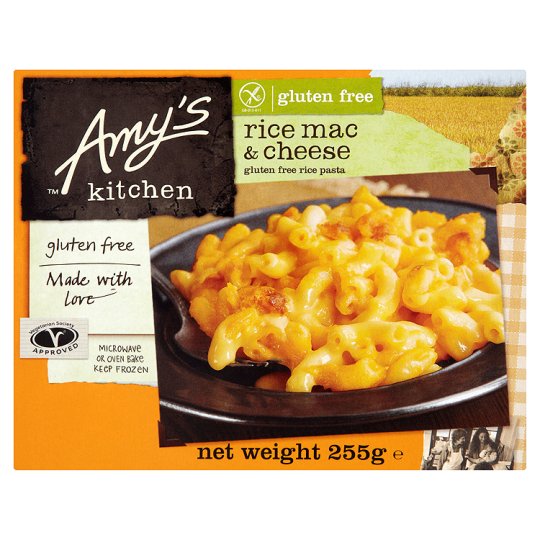 Made with rice pasta instead of normal pasta, which just looking at it gives me an uneasy stomach these days, this is hands down my favourite of Amy's offering.  Proper cheesy, the American style, this is pure comfort food and ready in just a few minutes from frozen. I’ve made it habit to have one in the freezer at all time and with them also doing vegan version with cheeze it is the ultimate hangover cure to cater for all. 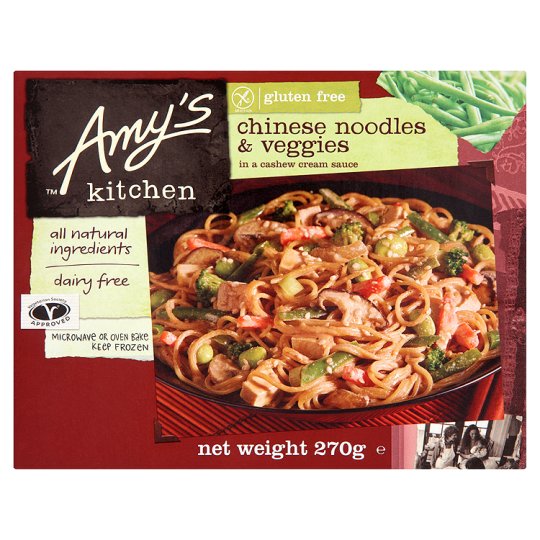 I loooove a good stir fry and this one is one of the best ready meal varieties I’ve tried, gluten free or not. The thing is most “Chinese” inspired ready meals are, let’s be honest, pretty disgusting, sticky sauces that taste of nothing tossed with very few, very overcooked vegetables and finished off with some limp egg noodles, neither giving you the satisfaction of a greasy takeaway version or the wholesomeness of a home cooked meal.

This however is properly tasty. A good amount of crunchy veg (shitake mushrooms, broccoli, julienned carrots and lots more) is combined with an absolutely fantastic cashew cream sauce, God knows how it is that creamy without a hint of dairy, tofu and rice noodles and makes for one damn tasty and also healthy ready meal that rivals something you would order out for a lot more money! I’ve already bought it several times and it has become a real regular choice of mine and once again flavours won me over before I even considered that it also catered to my none gluten needs!

I’ve also sampled and loved their gluten free Veggie lasagna and a variety of their warming and hearty tinned soups, all delivering in their flavour, wholesomeness and commitment to making something first and foremost delicious and not just a gluten or dairy free alternative that can’t measure up to the originals.
Posted by Stella's wardrobe at 10:08

I like this recepies. I go now to try that.