Recent Eats & Things To Do 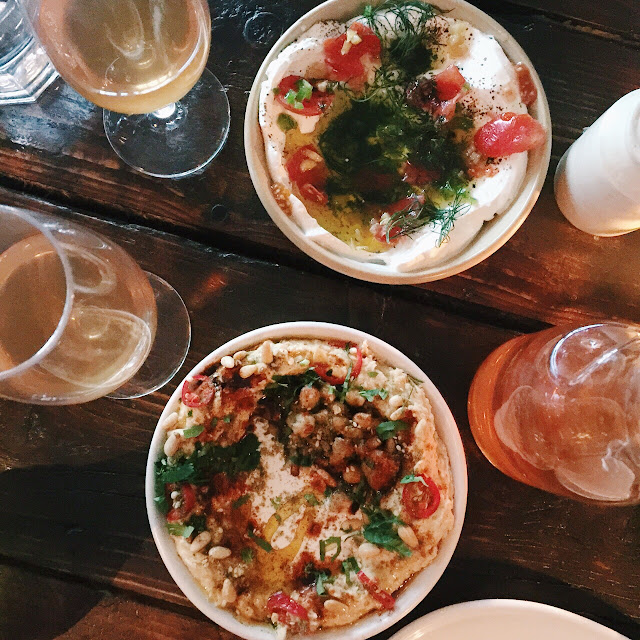 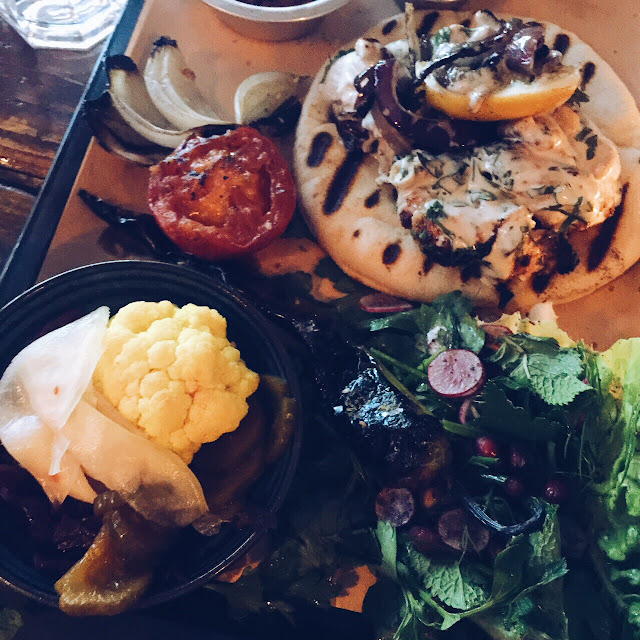 Berber & Q was love at first sight as far as restaurants go for me and I've put off reviewing it for a while now, wanting to schedule a second, and so far unsuccessful, visit to give a more detailed account of all the great dishes I couldn't fit in my belly on first sitting. However I couldn't keep its brilliance from you guys any longer, compelling me to write a first, though undoubtedly not last, account of my dining experience. Why? Well it is save to say that my so far only meal here was absolutely brilliant and one of those that you won't forget in a hurry.

Another graduate of the Yotam Ottolenghi school of cooking Josh Katz, having worked in one of his kitchens like the husband and wife duo behind one of my other all time favourite eating spots Honey & Co, has managed to give the middle Eastern food I have grown to love at Honey & Co and through many, many Ottolenghi salad boxes,  a modern and Brooklynesque twist, something that London had never been quite lucky enough to taste until Berber. Though the main premise of the menu, the barbecuing, could put many vegetarians and none red meat eaters like me off, here the vegetables are the real stars of the show. From the outstanding dips ( the best hummus of my life and an out of this world creme fraiche and harrissa dip), to the charred aubergine with smoked yogurt and cauliflower-served as shwarma with pomegranate seeds sure to leave you speechless - this is food to awaken taste buds, leaving you with no choice but to mop up any remaining juice with one of the freshly baked, fluffy pittas served on the side.

The meat we did share on this occasion was equally fantastic, juicy and chargrilled chicken, served on more freshly baked pita and with a side of garlic paste that is as close I will ever get to garlic perfection. Every dish managed to exceed anything I could have ever expected and left us sitting in near silence as we tried to take in all the flavours. This is middle Eastern food that excites without bounds, served in a cool and affordable environment. It's a place you want to tell all your friends about but also want to keep as your little secret, worth every penny and probably even the trip to the Brooklyn neighbourhood that it was inspired by.  Go now or wait for my second review because one thing I know is that I will return to this utter gem.

Bottomless brunch that could do better @ Bourne & Hollingsworth Buildings 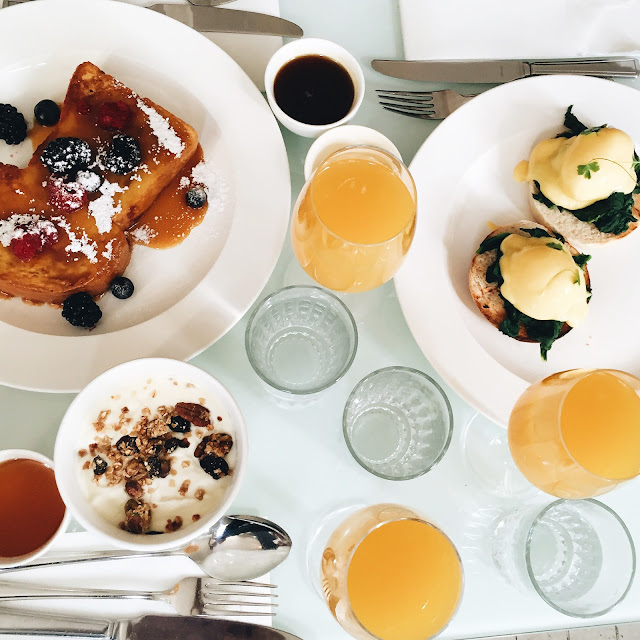 I was more than a little excited to try the bottomless brunch at Bourne & Hollingsworth for more than one reason. Firstly I had always been a big fan of their original 1920's themed basement bar on Charlotte Street, just around the corner from my old uni, which served delicious cocktails at decent prices in central London ( something that is a rarity). Secondly the premise of bottomless brunch combined two of my favourite things - prosecco and brunch, making it basically the best eating out invention of recent times. I had also seen more than a few blog posts and instagram snaps of the newly opened branch in Clerkenwell, all looking rather fantastic with its botanical look and free flowing booze. All this resulted in me putting the B&H brunch on top of my list of places to try and saw me making a reservation more than a month in advance to finally experience with my own eyes what all the fuss was about. One could argue that my anticipation resulted in unrealistic exceptions but then again I have been eating out in London for years now including dining at the overhyped and expensive. I know by now what bad service and food is when I see it and here it was most definitely the case.

We spent over half our time, a very limited 2 hour slot, trying to flag down disinterested waiters for a bellini refill that was more juice and flat Prosecoo than enjoyable drink. Waiters that as a whole seemed to forget about us being there and appeared only vaguely interested in the fact that we were there to order and eat food. Oh the food..the whole hype about it's look and the "bottomless" aspect have obviously made the food a secondary objective here, which is understandable to a degree, but forgetting the berry compote with your museli, denying it to then finally giving it to you after 25 minutes on top of serving you solidly boiled poached eggs is not ok especially if you end up spending over £30 per person on brunch.

I don't tend to write bad reviews but here I couldn't help myself. I was so excited to go and ended up spending a lot more money than I'd usually on a meal out, let alone brunch out, and couldn't help but share my sense of disappointment. I feel a lot of people would have left with a similar feeling to mine so I guess I don't want you guys to wait a month in anticpation for a brunch that is very average when London has so many other great brunch places to offer, leaving me a little more than sceptical of the bottomless brunch trend seemingly sweeping across London's eating out scene and sad that Bourne & Holingsworth fell so short of my expecations. 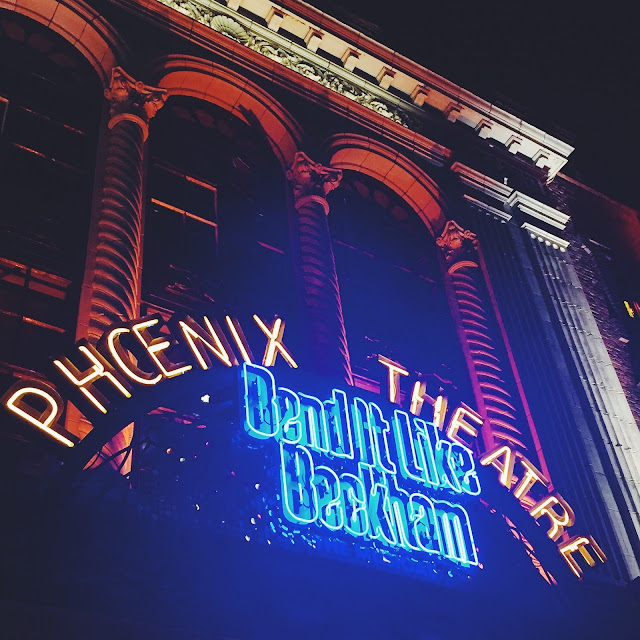 Here is a little known fact: I might have a very dry and sarcastic sense of humour, am a bit of a film snob ( Coppola and Anderson are my favourites) and have basically no idea who anyone on the X factor is, but to the surprise of seemingly everyone I FUCKING LOVE A MUSICAL. Yes, I can't help but feel ridiculously happy watching one and have seen my fair share ( my favourite overall would be a toss up between Mary Poppins and Chicago). Sadly I hadn't been to see one in a long, long time so jumped at the chance to see one of my favourite feel good films when growing up, Bend It Like Beckham, in a musical format. And you know what it was absolutely fantastic. Yes, it was cheesy but the mix of Bollywood dance moves, great sets and an ultimately female empowerment story left me grinning in a way that I rarely every do, especially on a rainy Tuesday evening after a stressful day at work. Even if you don't like the film go and see it and forget your daily life for the three hours you sit down in the theatre. It won't be the last musical I'll be seeing that is for sure.