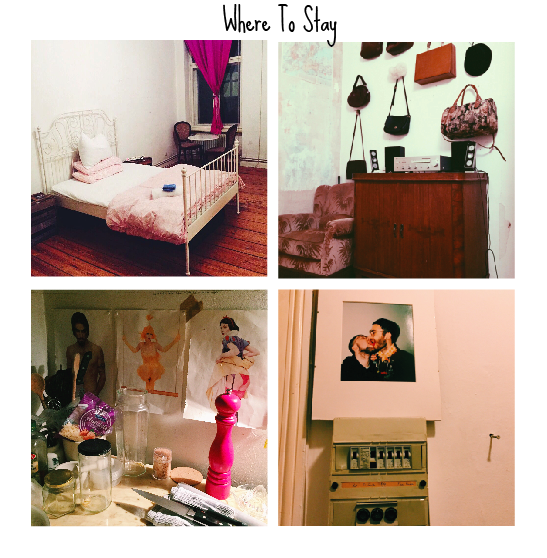 I have never used Air BnB before but for Berlin it proved the perfect way to avoid a sterile hotel room and get a real feel for the city - all that for a great price too. After a quick search online and narrowing down the area we were looking to stay in ( Kreuzberg was by common consent by my Berlin friends the area to be in and closest in terms of going and eating out to compared to my East London home), I couldn't help but instantly fall in love with this little apartment owned by Australian native Jessica. The high ceilings, quirky details and princess bed got my attention in a heart beat and the three nights we stayed there coming in at just about £70 each made this a complete bargain. It was even better in real life- the kind of flat I would dream to inhabit one day in London. Yes, it may be a little shabby chic but it has an instant warmth, clearly filled with memories of those that have had good times here.  After our Berghain trip we didn't even leave the flat for the following day because this was not only a little haven in Berlin but one of those places that you will want to come back to and make your own beautiful memories in. 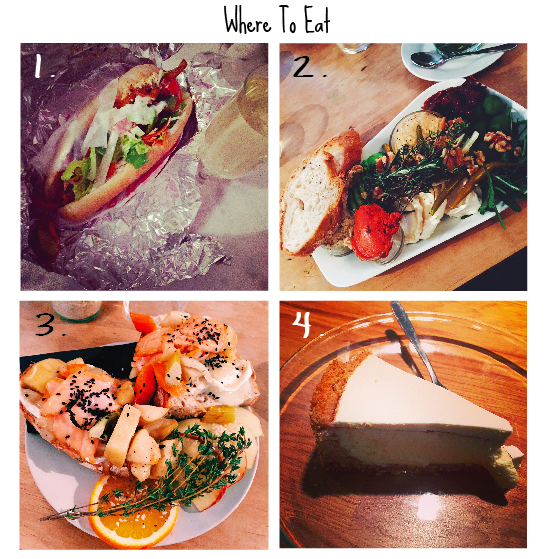 1. Vegetable Kebab at Mustafa's Gemüse Kebab
This tiny food van in the heart of Berlin easily attracts hour long queues. Why? Well Mustafa's has the supposedly best kebab the capital has to offer - a big claim in a town with a big Turkish community but an even bigger claim as the most famous of kebab's served here is one of a fully vegetarian kind ( though my meat eating friend was happy to discover a chicken version was also served up).  So is it worth the hype? I have to say yes. The deep fried vegetables, combined with a mix of secret garlic, chillli and yogurt sauces, stuffed into a fresh turkish bread and finished of with crunchy veg is nothing like I ever tasted before and damn tasty. For less than €4 for a normal sized kebab ( you can get a monster wrap for a few euros more) you get a delicious and fresh dinner that will tickle your taste buds and change the way you see kebabs forever. Yes, you are going to have to wait and yes you will have to eat it standing in the cold ( or you can go for the extravagant option as we did and über it home) but this food pilgrimage was defintely worth it and it was nice to see that such a popular place has stuck to it's roots with it's unassuming location and low prices.

2. + 3. Brunch at Roamers
This spot may be a little too hipster for my liking ( and yes that is rich coming from me but there wasn't a single German local in here, the menu was in English and every single fashion cliché from the bearded and tattooed barrista to the smoothies served in tiny milk bottles was fulfilled here ), however the brunch itself served here was one of the best value and tasty I have had in a long time and better than the by now very predictable - yes we have all tried corn fritters and baked eggs by now-  options served in most English brunch joints. Here the flavour combinations are not what you expect but amazing nonetheless. My warm goats cheese, topped with apple slices and smoked salmon on sourdough was the perfect marriage of sweet and savoury and showed off flavours I would have never usually combined. Abigail's mezze style platter was a treat not only to the eyes with it's vivid colours and array of middle eastern foods but was fresh, authentic and though not your bog standard brunch a real winner. Both dishes came in at €6.50 each, a price you easily pay for a poached egg and some bread in some London establishments.  Indeed despite some of my niggles I will really miss Roamers in the way it made brunch both exciting and affordable despite it's rather image conscious first appearance.

Cheesecake at Five Elephant
This cheesecake once again came highly recommend by most Berlin food bloggers and friends and being just a five minute walk away for our flat was our last foodie treat before getting on the plane home. And boy was it worth braving the Berlin cold! I am pretty critical when it comes to cheesecake, my favourite (the Ottolenghi macedemia nut and caramel cheesecake) the only variation I ever enjoyed- the rest for me too dry, too tasteless and too heavy. The cheesecake at Five Elephant managed to match it without a shadow of a doubt and didn't even need a single topping to do so. At just over 3 euros a slice you get a piece of heaven, it's crispy top layer, gooey middle and crunchy biscuit base finished off with the slightest hint of cinnamon. The cafe itself is also lovely and reminded me of some of my favourite coffee hang outs in London - now only to find a way to get my hands on the cake without a one and a half hour flight.... 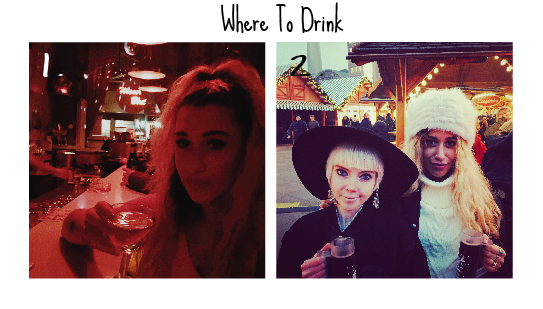 1. Wiener Blut Bar
It's a bit shitty, its a bit sleazy but this bar with red tint just around the corner from our flat was exactly the kind of place I like for an unpretentious drink. With cheap wine ( something like £3 a glass), a ridiculous mix of people ( we ended up talking to an Australian ageing rock star telling us about his heyday in the 70's) and rotating disco balls, its a bar that I would be happy to call my neighbourhood hangout in Berlin and it was the perfect place to toast my best friend's 20th birthday when the clock turned 12am!


2. Any Christmas Market
Berlin has loads of different Christmas markets in each part of town and to be honest there really isn't such a thing as a "bad" German Christmas market (I am German and may be a little biased but come on our Christmas traditions rule!) but whichever one you make it to, we went to the one by Alexanderplatz on this occasion, make sure you check out the amazing selection of hot alcoholic beverages they have on offer! And I'm not only talking plain mulled wine - here you get cinnamon and apple flavoured varieties, a white wine take on it or something nicely rounded off with a splash of amaretto or eggnog. Standing by all the different stands with a warming jug in your hand, watching the lights sparkle even put me, a complete Gringe when it comes to Christmas, in a festive mood and should be part of any trip to Germany during the winter months. 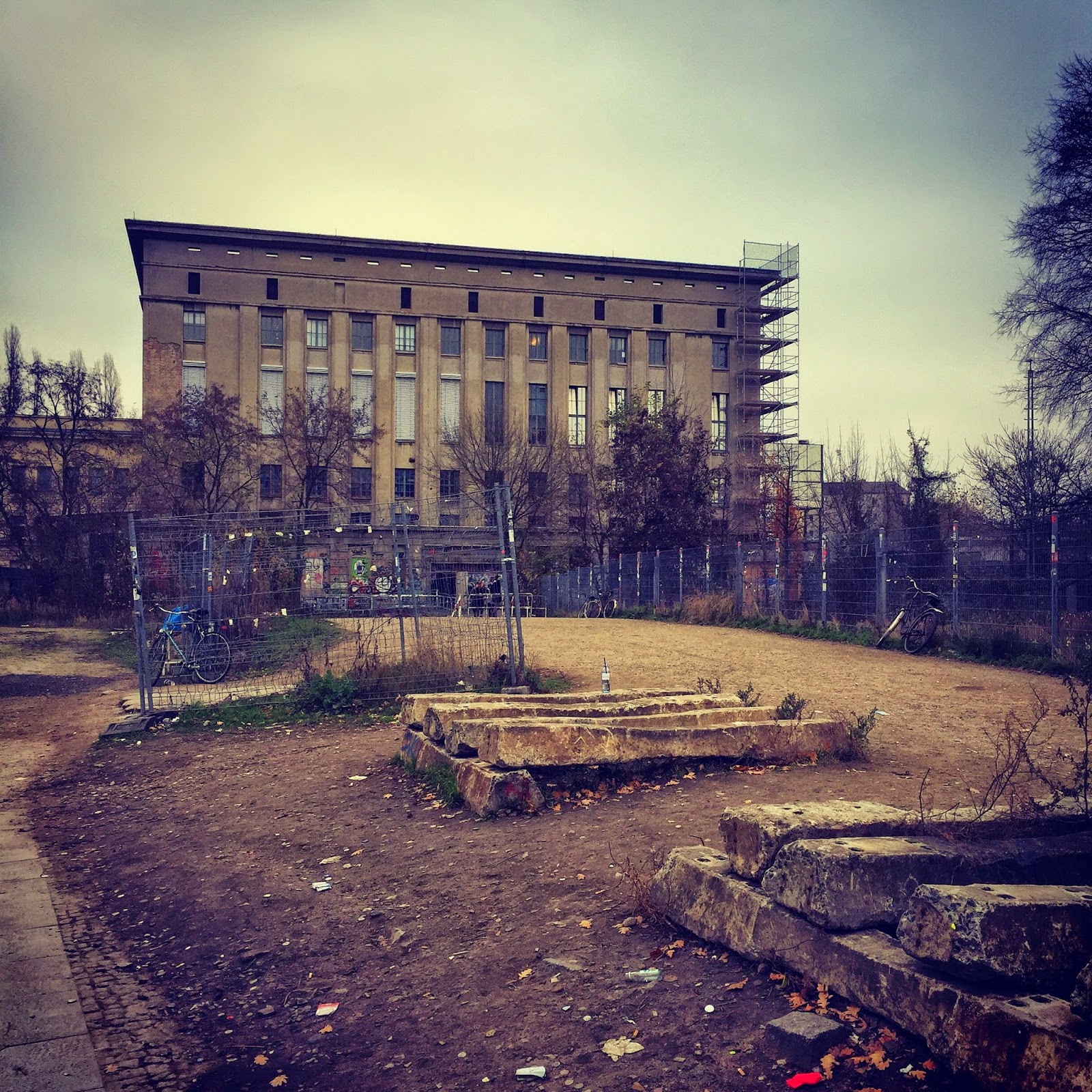 They say it's the best club in the world

but it's everything you ever wanted,

and nothing you ever expected.

I'm going to Berlin this summer.. I wish I was old enough to get into the Berghain ! I also stayed at Kreuzberg the first time I went to Berlin and I loved it ... Looking forward to go back there ;)
Useful article anyway

If you like online shopping with the best quality and service at iits cheapest price, visit https://www.justfor5pounds.com

หวยออนไลน์ The current online betting channel is the world's most well-known gambler, who is passionate about creating a unique experience for themselves with the full range of online casino gambling systems. It is designed and designed for the player to find a worthwhile bet and for the lottery is another activity that players choose to play. Continuously because it offers a full range of Lottery Lottery Lottery Lottery Lottery Lottery that players will be able to win a chance to gamble and experience the value of gambling, which we are open all the time the player can enter. To learn more about betting on all kinds of gambling games to meet their own needs and for the lottery is one of the gamblers to enter. To win continuously, especially the stock lottery that players will play at any time and also make the player to meet and experience the opportunity to make money on their own on every betting channel on the player. It is fun to play on the service channels that players will not be disappointed and online to make a profit for themselves fully because we give a percentage of the value and have. Most Fair This ensures that everyone can enjoy the fun of playing online casino games. หวยเด็ด