BALI : MY WORKING OUT GUIDE 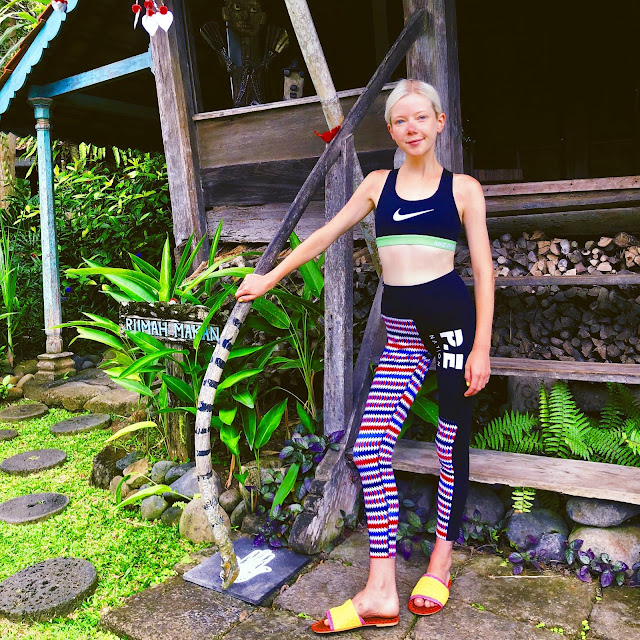 Josie, my dear friend who hosted me in Bali, knew that I love a good work out and Bali happens to be somewhat of paradise for all things exercise. Whether you want to learn how to surf, seek the yoga experience of your life or want to do some hard core cardio work in a beach setting, there is something for everyone and I tried to pack as many different classes into my time there as possible.

Yes, I guess to some this doesn’t exactly sound like a relaxing beach holiday, but for me it was all about the balance. I exercise 5-6 a week in London and I am simply not the beach bum type, plus enjoying a massive brunch after a morning class is one of the best feelings in the world because you really feel you’ve earned it. I would highly recommend to try at least a couple of my below recommendations as they massively contributed to the overall fantastic and unforgettable trip I had and offered me unique experiences I won’t forget in a hurry. 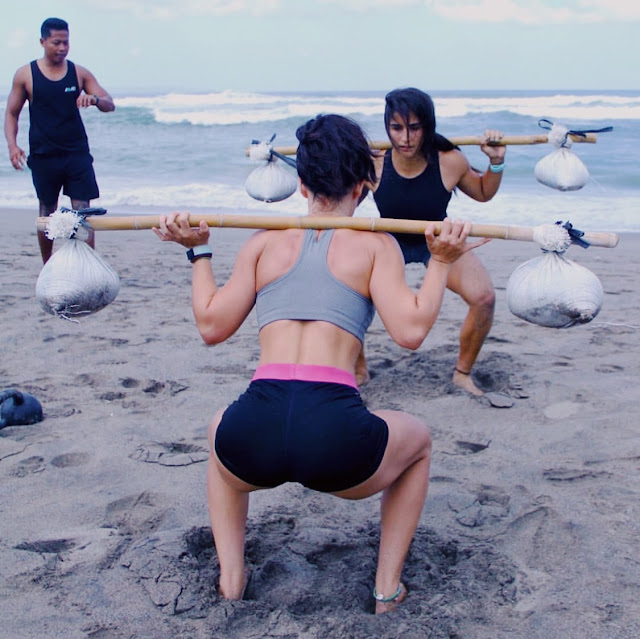 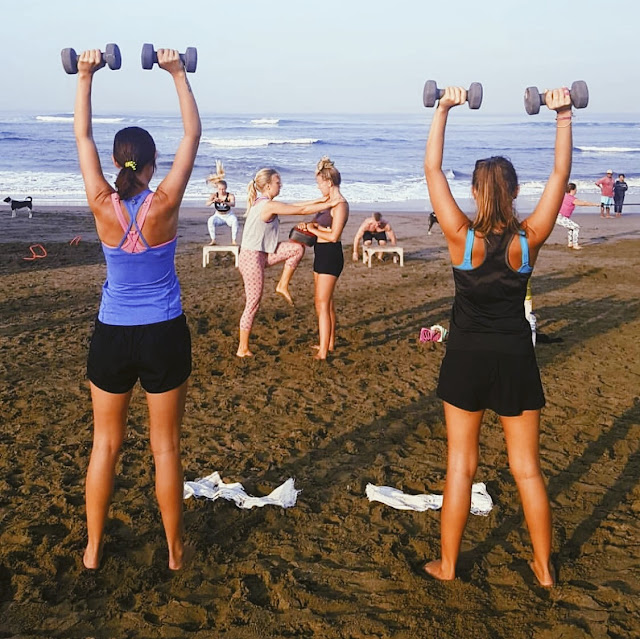 As any of my friends will tell you I love a tough work out that pushes me to my limits (I’ve become somewhat of a Barry’s boot camp ambassador, trying to make everyone I know try it at least once), so when Josie suggested a 7am beach boot camp with the guys at 2befit I jumped at the at the chance. And boy was it fun! Think circuit training but the beach as the sun is rising. Rather than being stuck in a grim and sweaty gym you are moving from station to station barefoot, running down the beach with sand bags on your back for extra endurance.

Everyone there, instructors and fellow attendees, had a wonderful energy about them and the instructors made this hour of intense work so fun that both Josie and I left pumped and ready for the rest of the day. The hour long class costs the equivalent of £3 which is ridiculous compared to what you pay in London and I have been dreaming of a Friday morning work out there ever since! Yes, it wasn’t easy but to me it was one of the most unique and memorable work out experiences in the most amazing of settings I have ever had!

SUNFLOW YOGA (AND ANY OTHER YOGA FOR THAT MATTER) @ DESA SENI 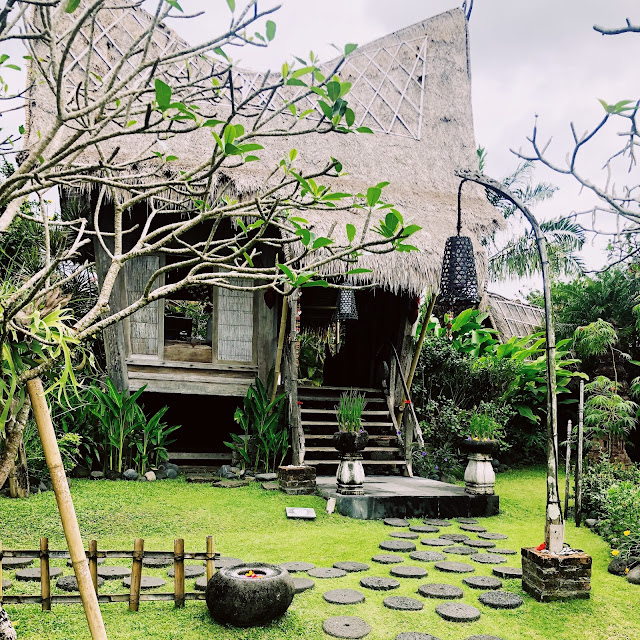 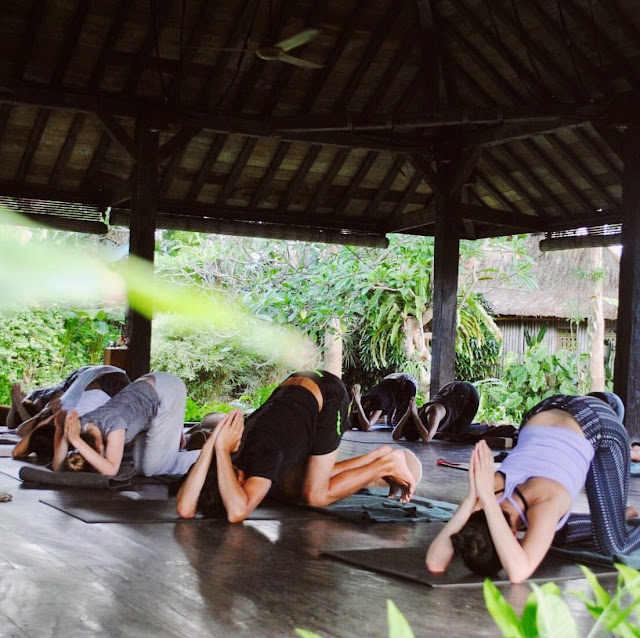 Bali is a bit of a yoga haven and Desa Seni is known globally as one of the best spots to improve one’s practise. Now, I am not usually a big fan of yoga back in London, let’s be honest a gym room full of smelly mats doesn’t exactly scream serenity, but when Josie mentioned a sunset flow yoga class held outdoors at Desa Seni I was more than intrigued, so we headed there one afternoon. Desa Seni doesn’t only offer a variety of yoga classes everyday but is also a beautifully designed boutique hotel resort and the whole complex has an almost otherworldly, magical feel about it, full of wooden huts, beautifully kept gardens and spaces for relaxation and reflection.

Our lesson was held in an open temple space in the midst of their lush gardens and as our lesson began we were encouraged to truly take in the nature’s around us. With closed eyes and lying on the floor it was an absolutely incredible experience to allow my body to fully use all its senses - hearing the birds chirping, feeling the slight evening breeze blowing and being fully aware of every breath I was taking. I could finally see the potential power of yoga and it had only been the first few minutes of the class. As the sun set our amazing instructor not only took us through the usual yoga sequences but made a real effort to show us how the right breathing was as important as each pose, with gentle music in the background completing the perfect atmosphere.

As we entered the final phase of the class (the shavasana), lying down and closing our eyes once again, the instructor read aloud a Buddhist poem and I have to honestly say by this point I had not been more relaxed and well stretched in years. This one hour showed me what “real” yoga is and I can now see why people go on week long retreats focusing on exactly this level of yoga practise. We went on to go to another class later in the week which was equally fantastic and eye opening and focused on a developing positive mind-set. It might sound very new age and hell London Stella would have frowned at the idea, but in this setting and with these fantastic instructors I am fully converted to the power of yoga. I have been to a couple of classes since being back in London and sadly it is just not the same. I urge if you find yourself in Bali try at least one Yoga class here, even if like me you are usually a yoga cynic. You’ll thank me later.

A SURF LESSON WITH LOCALS 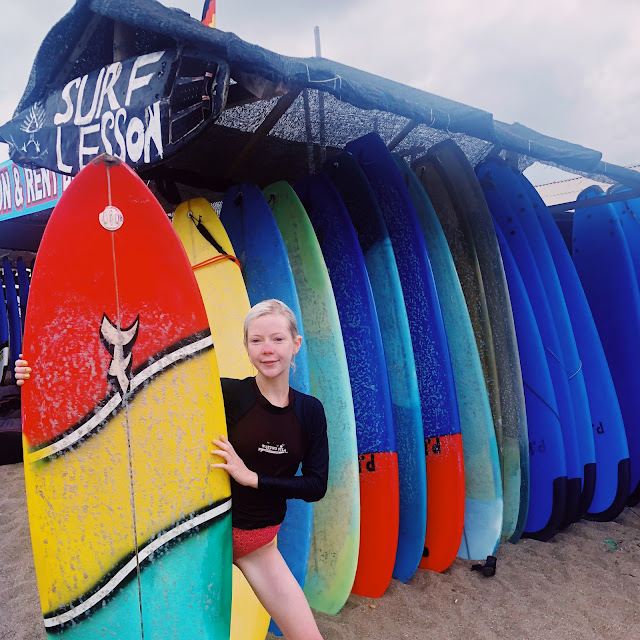 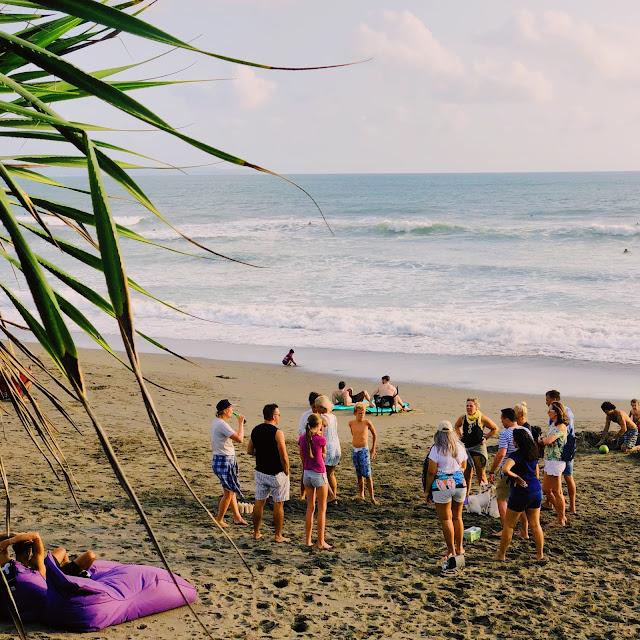 I was super keen to release my inner surfer chick while in Bali, it is after all an island world famous for its excellent waves, even if I wasn’t too sure I was going to be ANY good (I am generally quite clumsy in life so balancing on a wooden board in the sea didn’t sound like a natural skill to me). Bearing this in mind Josie organised two local surfer instructors to give us a two hour one to one lesson on my last day there. She knew these guys already as her and her fiancé Matt had taken a couple of lessons with them before, but you can simply wonder down Batung Bolong where there is surf school after surf school and haggle for a good price until you find the instructors you want to go for.

We ended up paying around £20 for the lesson which I thought was excellent value for money as I got taught all the basics and then had my super nice instructor with me in the water the entire time. Me being a total rookie he spotted the incoming waves and steered me towards them so that all I had to do is “ride the wave” when he told me to. Not bragging or anything, I mean maybe a little, but I managed to stand and stay that way on my second attempt and loved it from the very first second. In fact, I am so keen now to improve and do it again I have been dreaming of more surf holiday destinations (Hawaii anyone?!). I would highly recommend giving surfing a go while on the island, especially when you can get such attentive teaching at such a good price, I for one will be back on a board in no time! 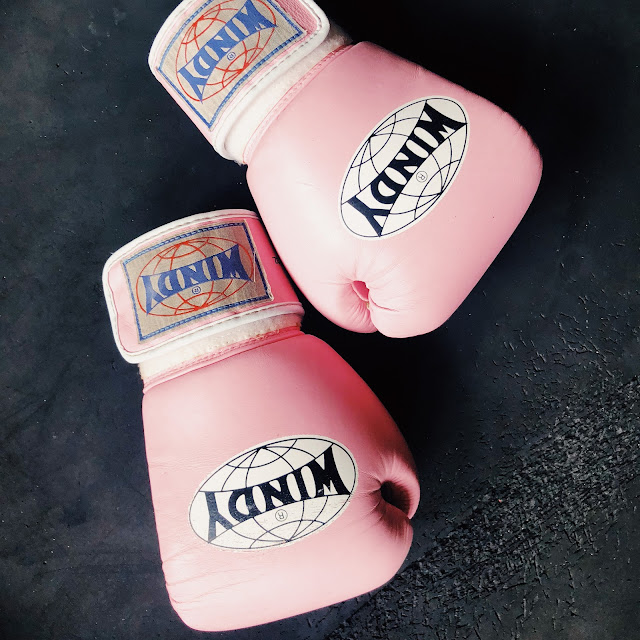 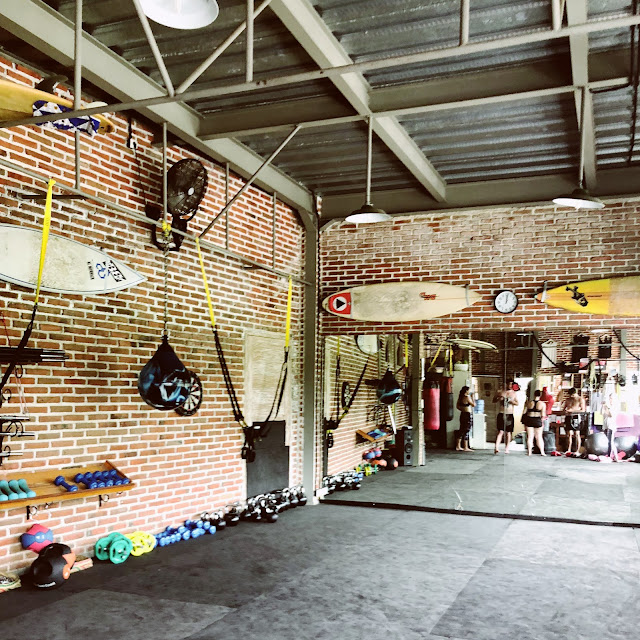 Josie took me to another of her favourite exercise studios where we attempted an hour of Muay Thai boxing. The studio itself is super nice and offers a range of classes including your usual hard core cardio work outs but also some more unusual work out approaches. I had done kick boxing a couple of times before and really enjoyed so was intrigued to find out what Mua Thai boxing was going to be all about.

I have to admit it is not the easiest of things to get your head around, much more akin to dancing with its set moves and rhythm than standard boxing, but we had a super friendly instructor who took his time to work with everyone individually in the class so that it really felt like a personal training session and you never felt like a complete idiot. We definitely got our sweat on and it’s a class not for the faint hearted but its super varied, warming up by skipping rope, then some group warm ups, followed by partnered up boxing and finished off with a round of boxing and kicking focused circuit training, but it was super fun and there was a great energy in the room so that even I as total beginner didn’t feel self-conscious at all! Definitely one to try if you like boxing and want to do something a little different and a total steal at about £5 a class!
Posted by Stella's wardrobe at 01:03

If you need to find out about a cheating partner or spouse; need help recover passwords; etc For all your spy and hacking needs, find (hackerlounge.net) via URL box; for the best spy and hack services you ever need help with. They provide solution to ALL spy and hack needs. They are the best.

🎆THE HACK GEEKS🎆
Have you ever wondered if it's possible to hack things the way hackers do it in the movies.🤔🤔
Yeah its possible!!!😁😁😁
"AS LONG AS IT'S TECHNOLOGY, IT CAN BE HACKED"
Hacking can easily be done by planting a computer virus or spyware(depending on what the hacker intend to do) in the targeted device.🤐🤐
We at THE HACK GEEKS give you the best hacking service there ever is.👌👌
We understand the Issues of scammers all over the internet and that's why we give you a solid prove of our services.
We have got the top hackers in hackerone that are always ready to hack for you anytime ,anywhere, any device, organisation, federal agencies, university, college you just think of it.
We can help:
*To Hack, Clone or Track a Phone?📱📲
Eg: Cloning of phones
Spying on kids, wife or husband.
Tracking of user location & daily routine.
*To Sniff, Erase or Change a file in a Company, Organisation or in a Federal agency?📖📃
Eg: Changing of grades in a university.
Changing of identity.
Deleting of files such as criminal records and evidence.
Changing of files and evidence in federal facilities.
Stealing of files and document from companies and organizations.
*To retrieve lost BitCoin💰💰
*Mining of BitCoin💰💰
*To hack an Email or any Social Media account?💞
*To Transfer funds without been detected?💴💵💷
*To increase your credit score?🔝🔝
*To Hack Credit/Debit card?💳💳
*Obtaining black Credit/Debit card.💳💳
ALL THESE ARE WHAT WE CAN DO FOR YOU.
We are descrete and won't expose our service to you to anyone.
Contact:
thehackgeeks @ gmail. com
We look forward to hacking for you.